Class 10 Social Science students should refer to the following concepts and notes for Development in standard 10. These exam notes for Grade 10 Social Science will be very useful for upcoming class tests and examinations and help you to score good marks 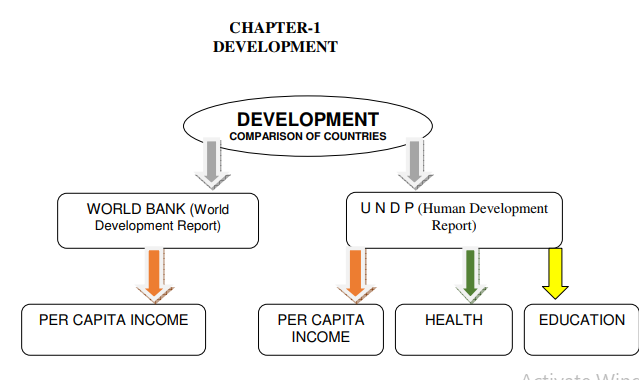 • Development: Growth of economy along with the improvement in the quality of life of the people like health, education etc.

• Per capita income: Is the average income obtained as the ratio between National Income and Population of a country.

• National income: Is the money value of final goods and services produced by a country during an accounting year.

• World Development Report: Prepared by World Bank to classifying countries based on their per capita income.

• Infant Mortality Rate: The number of children that die before the age of one year as a proportion of 1000 live birth in that particular year.

• Literacy Rate: It measures the proportion of literate population in the 7 and above age group.

• Sustainable Development: - It means development without hampering the Environment. It is the process of development that satisfies the present needs without compromising theneeds of the future generation.

• Body Mass Index: (BMI). One way to find out if adults are undernourished is to calculate Body Mass Index. Divide the weight of a person (in kg) by the square of the height (in metres). If this figure is less than 18.5 then the person would be considered undernourished. If this BMI is more than 25, then a person is overweight.
• Censes: The official enumeration of population along with certain economic and social statistics in a given territory and carried out on a specific day.

- World Development Report 2006, “In 2004 countries with per capita income of Rs. 453000 per annum are called rich or developed countries.

Those with per capita income of Rs.37000 or less are called low income countries.

- Human Development Report 2006 published by UNDP, “Development is based on per capita income, educational levels of the people and their health status.

Sustainability : The regular process without harming the productivity of future generation and satisfy the need of present generation.

Average Income : Total income of the country divided by its total population. Also known as per capita income.

National Income : Sum of value of final goods produced within the country and income from foreign factors.

Infant Mortality Rate : The number of children that die before the age of one year as a proportion of 1000 live children born in that particular year.

Literacy Rate : The proportion of literate population in the 7 and above, age group.

Question. What contributes to the human development?
Answer :
There are many economic as well as non-economic factors which contribute to the human development.
• Living a long and healthy life.
• To have education, information and knowledge.
• Enjoying a decent standard of living.
• Enjoying basic fundamental rights like freedom, security, education etc.
• To have equality and enjoyment of human rights.

Question. ‘Money cannot buy all the goods and services that one needs to live well.’ Explain • Money or higher per capita income cannot buy a pollution free environment or good health.
Answer :
• Money cannot buy peace and democracy
• Per capital income of Maharashtra is higher than Kerala but still in lacks behind in education and health facilities.
• In Kerala, out of 1000 children born alive,12 die before completing one year of age but in Maharashtra the proportion of children dying is 25.

Question. What is average income or per capita income? Why do we use averages? What are the limitations of per capita income?
Answer :
The average income is the total income of the country divided by its total population.
We use averages because they are useful for comparing differing quantities of the same category. For example, to compute the per capita income of a country, averages have to be
used because there are differences in the incomes of diverse people. Its main limitations are:
i) A rise in per capital income is due to rise in prices and not due to increase in physical output; it is not a reliable index of economic development.
ii) National income rises but its distribution makes the rich richer and the poor poorer.
iii) It excludes all non-marketed goods and services, even though they may be important for human happiness and better quality of life.
iv) Rise in per capital income may be due to use of modern capital intensive technology in production which may be labour displacing in nature thus adversely affecting the poor masses
v) It covers only the economic aspects ignoring peace, health, environment, education, longevity, etc.

Question. Besides the size of per capita income, which other property of income is important in comparing two or more societies?
Answer : Per capita income is an important but not the only criterion for development. Along with average income, equitable distribution of income in a country should also be considered.

Question. What is human development index HDI?
Answer : HDI is a composite index of achievements of a nation in terms of three important variables that determine the quality of life. These three variables are longevity, knowledge & standard of living. It is prepared by United Nations Development program.

Question. In what respects is the criterion used by UNDP for measuring development different from the one used by the World Bank? 3 Marks
Answer : World Bank uses the criterion of per capita income (measured in dollar terms) to classify different countries as high income or low income countries. Countries with per capita income of Rs 4,53,000 per annum & above in 2004 are rich countries & countries which have per capita income of Rs. 37000 per annum or less are low income countries (according to WDR 2006). But the limitation of this criterion is that it doesn’t tell us anything about the distribution of income in a country.
UNDP uses a different criterion called human development index (HDI). HDI is a composite index on a scale 0-1 measured on the basis of three indicators,
a) Longevity :- It is measured in terms of life expectancy
b) Knowledge :- It is measured by a combination of adult literacy & combined enrollment ratio
c) Standard of living :- It is measured by real per capita income in dollars The country with 0 HDI will be at bottom & the one with 1 HDI will be at top. All other countries are in between.

Economic Development
1. It refers to sustained increase in real per capita income that promotes economic welfare by reducing poverty, unemployment & inequalities in distribution of income.
2. It can be indicated by national income & per capita income.
3. It is narrower term as compared to economic development.
4. It considers people can be made better off by increasing their command over goods and services.

Question. Describe briefly four steps taken by the Indian government for raising the status of women at par with that of men. 4 Marks
Answer : (i) Women are given the equal right to vote like those of men
(ii) the government of India has declared dowry as illegal and now no one can force the other party to give dowry.
(iii) To impart education to girls various schools and colleges have been opened.
(iv) Gender empowerment focusses on opportunities and participation in decision making process and values.
(v) Women have been recognised as a separate target group in our development planning, for raising their status at par with that of men. To achieve the above objective the National Commission for women was set up in January 1992.

Suggestions to achieve it:
(i) Increased use of renewable and clean sources of energy, less use of fossil fuels, organic farming.
(ii) Measures to reduce global warming and global limits on carbon emissions etc.