Class 10 Social Science students should refer to the following concepts and notes for Federalism in standard 10. These exam notes for Grade 10 Social Science will be very useful for upcoming class tests and examinations and help you to score good marks 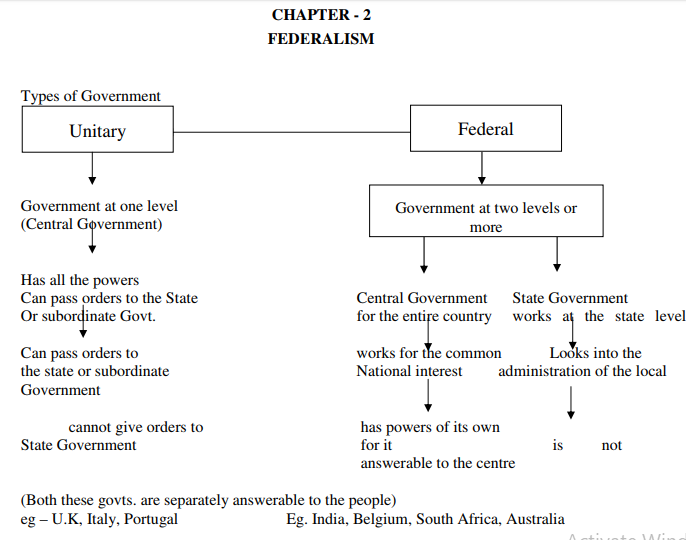 • Two or more levels of government

• Each level has its own jurisdiction (power)

• Jurisdictions Specified in the Constitution

• Changes in the provisions of Constitution require the consent of both the govt’s.

• Courts acts as an umpire if any dispute arise between the levels of government.

• Sources of revenue specified (Financial autonomy) – Every state has its own revenue to look after its welfare. 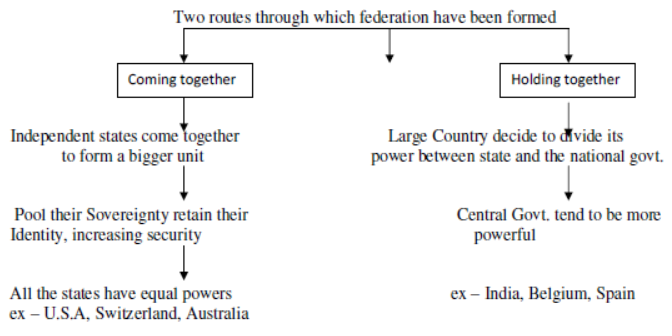 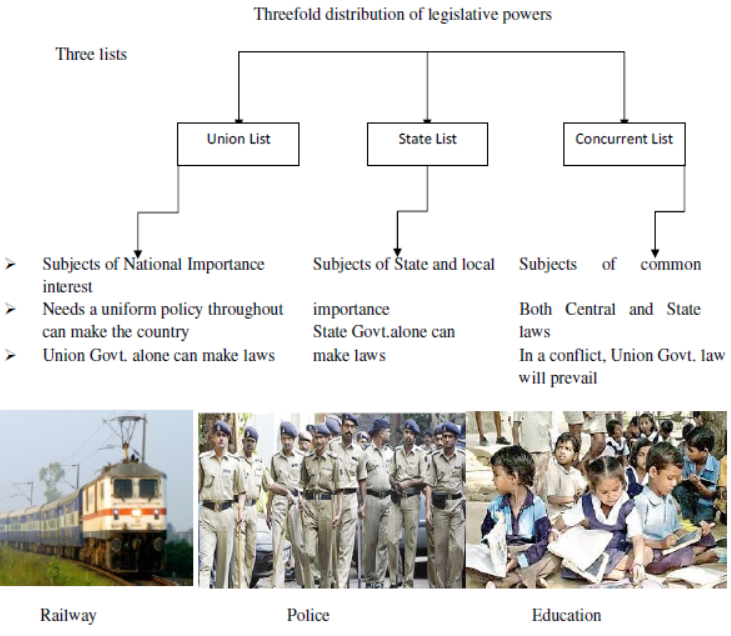 • Subjects that do not fall in any of the three lists, laws of union Govt. will prevail. How is federalism practiced?

• Linguistic states- People who spoke the same language lived in the same state.

• Some states were created not on the basis of language, but to recognize differences based on culture, ethnicity or geography.

• Formation of linguistic states has made the country united, made administration easier. Decentralization Power taken away from centre and State given to local government Reason for Decentralization in India –

• Large no: of problems and issues

• Group of each village have a panchayat

• Directly elected by the people

• Works under the supervision of gramasabha (all voters of the village)

1. What are the two routes through which federation have been formed?

• There are two kinds of routes through which federations can be formed.

• First one is ‘Coming together Federation’ in which independent units comes closely to each other to form a union in which both centre and states vis-à-vis powerful.

• Second one is ‘Holding together Federation’- here a large country decides to divide its powers between the constituent states and the national government.

2. What is the importance of Local Self government?

• The matter of local interest like water supply, the cleaning and lighting of streets, maintenance of drainage system, etc are best settled at the local level.

• It is possible for the people to directly participate in decision making at the local levels like people can take part in panchayat meetings held in their area.

• The money spend and the to manage things more efficiently are seen here.

3. What is the real reason for the success of federalism in India?

• The constitutional provisions are laid out very clearly

• The nature of democratic politics has ensured its success

• There is respect for diversity

• The creation of Linguistic States , the flexibility shown by the Indian political leaders in Language policy and the significant changes made in the Centre –State relationships

to undermine the power of states.

• The central government misused the constitution often to dismiss the state governments that were controlled by other parties. This is against the spirit of federalism.

5. Write a note on the Local bodies that exist in Urban areas?

• Municipalities are setup in towns. Big cities have Municipal Corporations .

• Both Municipalities and Municipal Corporations are controlled by elected bodies consisting of the people’s representatives.

• C]Municipal Chairman is the head of the Municipality and Mayor for Municipal Corporation.

1.What are the main features of Federalism ?

• 1.In federalism there are two or more tires of government but both of the tiers rule over the same citizens.

• Powers of every level are clearly written in the constitution and no one is authorized to cross its limits.

• The fundamental provisions of the Constitution cannot be unilaterally changed by one level of government.

• In federalism, courts are known as the guardians of constitution.

Question. What is the official post for the chaiperson of a Municipal Corporation?

Question. How is a federal government different from the unitary form of government? Why are federations preferred these days?

Ans. Difference between federal and unitary forms of government:

(ii) In unitary government, the sub-units are subordinate to the centre, whereas in a federation, central government cannot encroach on the rights of state governments.

(iii) In Unitary system, centre can order the sub- units with cannot happen in federation.

A federation is preferred because :

(i) It helps in making administration effective and efficient.

(ii) It helps to accommodate all diverse groups.

Question. Highlight any three steps taken by India towards making it a federation.

Ans. (i) Reorganisation of states on linguistic basis.

Question. Describe any three provisions of amendment made in Indian Constitution in 1992 for making three tier government more effective and powerful.

Ans. The various provisions of the constitutional amendment of 1992, made the third tier of our democracy more powerful. Its provisions include –

(a) Now it is constitutionally mandatory to hold regular elections to local government bodies.

(b) Seats are reserved in the elected bodies and the executives of these institutions for the Scheduled Castes, Scheduled Tribes and other Backward Classes.

(c) At least one-third of all positions are reserved for women.

(d) An independent institution called the State Election Commission has been created in each state to conduct panchayat and municipal elections.

(e) The State governments are required to share some powers and revenue with local government bodies. The nature of sharing varies from state to state.

Question. How are the powers divided between the states and centre? Explain with examples.

Ans. (i) There is three-fold distribution of legislative powers :

(a) Union list : Union lists consist of 97 subjects. It includes subjects of national importance such as defence of the country, foreign affairs, banking, communication and currency.

(b) State list : State list consists of 66 subjects. It contains subjects of state and local importance such as police, trade, commerce, agriculture and irrigation.

(c) Concurrent list : Concurrent list consists of 47 subjects. It includes subjects of common interest to both such as education, forest trade unions, marriage, adoption and succession.

(ii) Union Government can make laws on the subjects which are not covered under these lists. These subjects are put in residuary list.

Question. Much of the official work in Indian state is done in which language?

Ans. Much of the official work in Indian states is done in the language of the state.