· Won democracy in 1990 – king formally remained the head of the state.

· He real power was with elected representatives –

· 2005 he dismissed the PM and dissolved the elected govt.

· Maoist insurgents and other organization join together – mass strike – 24 April 2004 king agreed to their demands.

2) Three demands made by SPA

o Due to pressure from World Bank, the control of municipal water supply (city of Cochabamba) to a multi-national company

o Price of water increased by Four times. (Water bill charges increased to 1000-but average income of a person Rs 5000a month)

· Govt. agreed to the demands contract with MNC Cancelled and restored the old rates

3) Democracy has been evolved through mass mobilization

· Conflict between those groups who have exercised power and those who aspire for a share in power.

· Take place when – Expansion, transition to or deepening of democracy

· sometimes resolved through Parliament or from outside people

4) How do mass mobilization influence the decision in democracy –

· Organization that influence government policies but they do not directly control or share political power –formed by people with Common occupation, interest or aspirations eg – Railway associations, Teachers associations. 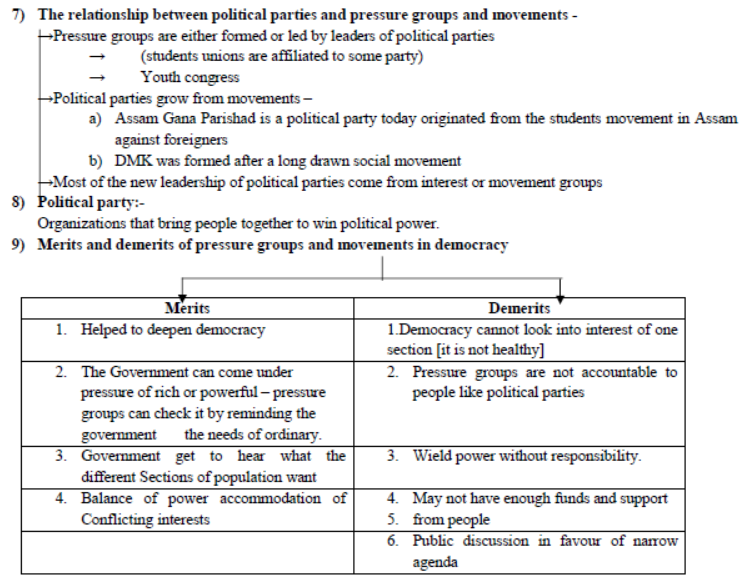 Q.1: - What were the results of the popular struggle of Nepal?
• The King was forced to concede all the three demands of the protesters.
• The SPA chose Girija Prasad Koirala as the new P.M. of the interim government.
• The restored parliament met and passed laws taking away most of the power of the king.

Q.2: - Mention any three similarities between the movements in Nepal and Bolivia.
• Both these are instances of political conflict that led to popular struggles.
• In both cases, the struggle involves mass mobilizations public demonstration of mass support clinched the dispute.
• Both instances involved the critical role of political organization.

Q.3: - Write the composition of the organization which protested against water privatization in Bolivia?
• The protest against water privatization in Bolivia was not led by any political party. It was led by FEDECOR.
• This organization comprised of local professionals, including engineers and environmentalists.
• They were supported by a federation of farmers who relied on irrigation, middle class students, confederation of factory workers, unions and the city’s growing population of the homeless street children.

Q.4: - What are public interest groups? How do they look after the interests of the public ?
• A public interest group is a group that promotes the interests of the people of the society. There interests can be of a particular section of the society or of the entire society in general. Their activities benefit the entire society and not just a particular section of the society.
2nd Part of the question
• They organize meetings and try to gain the public support for their cause.
• They try to influence the media by drawing its attention to their issues.
• They sometimes organized strikes and dharna’s to voice their interests.
E.g.: - Bolivia organization FEDECOR and government employee’s movement called BAMCEF are some examples of public interest group.

Q.1: - Write in brief about the Nepal’s second movement for democracy
• The Nepal movement took place in April 2006 which was aimed at restoring democracy.
• The Nepalese king Birendra was killed in 2001.
• The new king Gyanendra refused to accept the democratic rule.
• In February 2005 the king dismissed the Prime Minister and dissolved the popularly elected parliament.
• All the major parties in the parliament formed SPA and called for a four day’s strike in Katmandu.
• This strike turned into an indefinite strike after the involvement of Maoist with 3 to 5 lakh people.
• On 24 th April 2006, the king was forced to concede the demands of the people. The SPA chose Girija Prasad Koirala as the new P.M. of the interim govt.

Q.2: - Is the influence of pressure groups and movements healthy in a democracy?
Yes, putting pressure on the rulers is not an unhealthy activity in a democracy as long as everyone gets this opportunity because –
• A democracy must look after the interest of all not just one section
• These groups help the people of a particular section to voice their interest and demands.
• Two pressure groups of different ideology helps in maintaining a balance between the demands of various groups in the society.
• Pressure groups and movements have deepened democracy in the world.
• Some people may criticize the role of these groups as these groups promote the interest of
• their sections and not accountable to the people in general.

Q.3: - Discuss in brief the popular struggle of Bolivia
• Bolivia is a poor country in Latin America. The World Bank pressurized the government to give up its control of municipal water supply.
• The govt. sold these rights for the city of Cochabamba to a MNC.
• The MNC immediately increased the price of water by four times.
• Many people received water bills of Rs- 1000 where as their average monthly income was Rs. 5000/.
• In January 2000 a new alliance of labor, human rights and community leaders organized a Successful four days general strike in the city and the Govt. agreed to negotiate, yet nothing happened.
• The agitation started again in February but the police restored to brutal repression.
• Another strike followed in April and the Govt. imposed martial law.
• But the power of the people forced the officials of the MNC and the govt. to concede to all the demands of the protesters.
• Finally the contract with the MNC was cancelled and water supply was restored to the municipality at old rates.

Q.4.How do Pressure groups and movements influence politics?
• They try to gain public support and sympathy for their goals and their activities by carrying out information campaigns, organizing meeting, filing petitions etc.;
• They often organize protest activity like strikes or disrupting government programmes.
• Business groups often employ professional lobbyists or sponsor expensive advertisements.
• The Pressure groups are either formed or led by the leaders of political parties or act as an extended arms of political parties.
• Sometimes Political parties grow out of movements. Like DMK and AIADMK in Tamil Nadu

Question. How has the struggle of the Nepali people become a source of inspiration to democrats all over the world? Explain.
Ans. Nepal witnessed an extraordinary popular movement in April 2006, which aimed at restoring democracy. This struggle is a source of inspiration to democrats all over the world.
All major political parties in the Parliament formed a Seven Party Alliance (SPA) and called for a four day strike in Kathmandu, the country’s capital.
This protest soon turned into an indefinite strike in which Maoist insurgents and various organizations joined hands.
People defied curfew and took to the streets. They demanded restoration of parliament, power to an all-party government and a new constituent assembly.
As a result, on 24 April 2006, that is, the last day of the ultimatum, the king was forced to concede all the demands of people and democracy was restored.

Question. How do pressure groups and movements strengthen democracy?
Ans. They raise the democratic consciousness of the people.

Question. Describe, in brief, any four features of movement for democracy in Nepal.
Ans. (i) Nepal was one of the ‘third wave’ countries that had won democracy in 1990. Although the King formally remained the head of the state, the real power was exercised by popularly elected representatives.
(ii) King Birendra, who has accepted this transition from absolute monarchy to constitutional monarchy, was killed in 2001.
(iii) King Gyanendra, the new king of Nepal, was not prepared to accept democratic rule. He took advantage of the weakness and unpopularity of the democratically elected government.
(iv) In February 2005, the king dismissed the then Prime Minister and dissolved the popularly elected Parliament. The movement of April 2006 was aimed at regaining popular control over the government from the king.
(v) Finally, the king was forced to bow. As a result, the parliament was restored and laws were passed to take away most of the powers of the king.

Question. How did the struggle of the Nepali people become a source of inspiration to democrats all over the world? Explain.
Ans. (i) Nepal witnessed an extraordinary popular movement in April 2006. The movement was aimed at restoring democracy.
(ii) In February 2005, the king of Nepal dismissed the then prime minister and dissolved the popularly elected parliament.
(iii) The movement of April 2006 was aimed at regaining popular control over the government from the king.
(iv) All the political parties in the Parliament formed an alliance—Seven Party Alliance (SPA)—and called for four day strike in Kathmandu, the capital of Nepal.
(v) The protests turned into indefinite strike in which Maoist and various organisations also joined hands.
(vi) People defied curfew and came to streets. More than lakhs of people gathered almost every day to demand restoration of democracy.
(vii) On 21 April, they served an ultimatum to the king and the leaders of the movement rejected the half-hearted concessions given by the king and stuck to their demand for restoration of parliament, power to all party government and a new constituent assembly.
(viii) 24th April 2006 was the last day of the ultimatum; the king was forced to grant all the demands.

Question. How was Nepal movement different from Bolivia’s movement?
Ans. 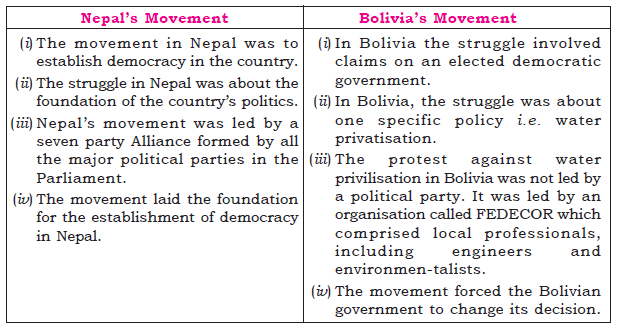 Question. “Social movements and pressure groups try to mobilise citizens in many ways.” Read the above statement carefully and then answer the questions that follow:
(i) Identify the Fundamental Right which is related to the above statement.
(ii) How are pressure groups different from political parties?
(iii) Which value is associated with social movements? Give one example of this statement.
Ans. (i) The Right to Freedom.
(ii) Unlike political parties, pressure groups do not aim to directly control or share political power.
(iii) The value associated with social movements is collective goal. An example of this type of movement is anti-liquor movement.

Question. What is BAMCEF? What problems does it deal with? What is its principal concern?
Ans. BAMCEF stands for Backward and Minority Communities Employees Federation. This is an organisation largely made up of government employees that campaigns against caste discrimination. It addresses the problems of its members who suffer discrimination.
Its principal concern is with social justice and social equality for the entire society.

Question. Give two examples of movements that are long term and involve more than one issue.
Ans. Two examples of such movements:
(i) Environmental movement
(ii) Women’s movement