Class 10 Social Science students should refer to the following concepts and notes for Novels Society And History in standard 10. These exam notes for Grade 10 Social Science will be very useful for upcoming class tests and examinations and help you to score good marks 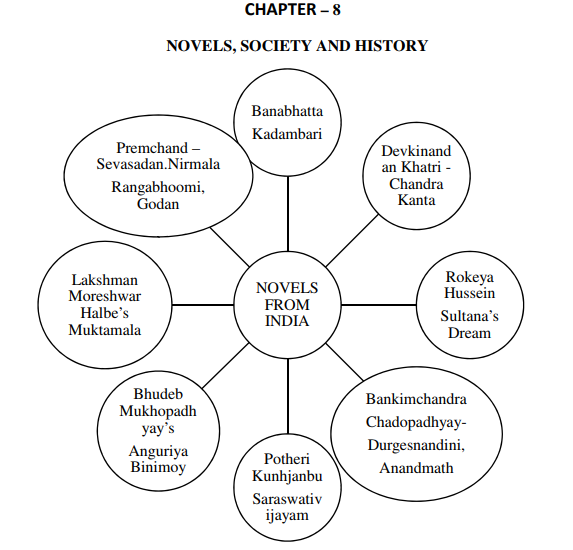 The novel first took firm root in England and France.

Sarah Chauncey Woolsey- who wrote under the pen-name Susan Coolidge.

A novel whose story is published in instalments in a journal is serialized novel. Charles Dickens’s Pickwick Papers was the first novel to be serialised (1836) in a magazine.

Epistolary Novel –Novels written in the form of a series of letters – eg. Pamela written by Samuel Richardson.

Protagonist Main character of a novel.

Sarah Chauncey Woolsey- who wrote under the pen-name Susan Coolidge.

The characters of Hori and Dhaniya appear in Godan written by Premchand.

The traditional art of storytelling is called kissa-goi.

The long tradition of prose tales of adventure and heroism in Persian and Urdu, is known as Dastan.

The earliest Indian novels were written in Bengali and Marathi.

The earliest novel in Marathi was Baba Padmanji’s Yamuna Paryatan (1857), which used a simple style of storytelling to speak about the plight of widows.

Kalki – Pen name of R Krishnamurthy, the most popular historical novelist in Tamil.

Q.1: -Who is the author of Pariksha Guru? What are the values associated with this novel?
• Pareeksha Guru written by Sreenivas Das- published in 1882.
• The novel cautioned young men of well to do families against the dangerous influences of bad company and consequent loose morals.
• It relects the inner and the outer world of newly emerging middle class.
• The charecters in the novel are caught in the difficulty of adapting to colonized society and at the same time preserving their own cultural identity.
• The novel tries to teach young men to remain rooted in the values of their own traditional culture and live with dignity and honour.

Q.2: -Explain how did novels became a popular medium of entertainment among the middle class during late 19th century.
• The world created by novels were absorbing, believable and seemingly real.
• While reading novels, the readers were transported to another person’s world and began looking at life as it was experienced by the characters of the novel.
• Novels allowed individuals the pleasure of reading in private as well as publically.
• The stories of novels were discussed in homes, meetings or even in offices.
• Novels dealt with life of common man, their experiences, emotions &sentiments.

Q.3: Why did O Chandu Menon give up his idea of translating English novel to Malayalam?
• O Chandu Menon tried to translate Benjamin Disraeli’s Henrietta Temple to Malayalam but soon he realized that his readers in Kerala are not familiar with the ways in which the characters in English novels lived: their clothes, ways of speaking and manners were unknown to them.

Q.5: -What actions of Robinson Crusoe makes us see him as a typical colonizer?
• Adventurism- slave trader- Not treat the coloured people as human beings which shows the racial discrimination- his actions were barbaric and primitive which makes
him a typical colonizer.

Q.6: -What are serialized novels and also mention the advantages of it?
• A story is published in installments, keeping the suspense for the next issue.
• Serialization allowed readers to relish the suspense discuss the characters of a novel and live for weeks with their stories.
• This was possible since the magazines were illustrated, cheap and affordable.

LONG ANSWERS TYPE QUESTIONS 5marks
Q.1: - “Novels were useful for both the colonial administrators and Indians in colonial India.” Support the statement with example.
• To colonial administration –
• A source to understand native life and customs.
• It helped to govern Indian society with various communities and castes.
• Novels helped to know the domestic life dresses religious worships etc.
• It helped to understand the strategic areas - Some of the books were translated into English by British administrators or Christian missioners.
To Indians –
• Indians used the novels as a powerful medium to criticize defects what they considered in the society and to suggest remedies.
• To established relationship to its past-To propagate their ideas about society.
• It glorified the accounts of the past and helped in creating sense of National Pride among the readers.
• Novels helped in creating a sense of collective belongingness on the basis of one’s language.

2) Give an assessment contribution made by Vaikom Muhammad Basheer to Malayalam literature.
• Vaikom Muhammad Basheer was one of the early Muslim writers to gain name and fame as a novelist in Malayalam.
• Basheer’s work were based on his rich personal experience rather than on books from the past. When he was in class V he left home to take part in salt Satyagraha.He travelled
to different parts of India.
• He also travelled to Arabia and spent the days working in a ship.
• Basheers novels and stories were written ordinary language of conversation. With wonderful humour Basheers novels spoke about the day to day lives of Muslim households.
• He also brought into Malayalam writing themes which were considered unusual at that
time- poverty, insanity and life in prison.

Q.3: - How ‘Industrial Revolution’ was reflected in the novels?
• When Industrial Revolution began factories came up, business profits increased but workers faced problems.
• Cities expanded in an unregulated way and were filled with over worked and unpaid workers.
• Deeply critical of these developments, novelists such as Charles Dickens wrote about terrible effects of industrialization on people’s lives and characters.
• His novel ‘Hard Times’ depicts a fictitious industrial town as a grim full of machinery, smoking chimneys and rivers polluted.
• Dickens criticized not just the greed for profit but also the ideas that reduced human beings into simple instruments of production.
• Dickens’ ‘Oliver Twist is the tale of poor orphan who lived in a world of petty criminals and beggars. Oliver was finally adopted by a wealthy man and lived happy ever after.
• Emili Zola’s ‘Germinal’ was written on the left of a young miner but it ends up in desire. It didn’t have happened like Oliver Twist of Dickens.

Q4. Explain the role of novelist in the field of social reforms in India with the help of examples
• Indulekha is a novel in which the novelist Chandu Menon criticises the the ignorance and immorality of the Suri Namboothiri who belong to a upper caste hindu in Kerala.This is concerned with the marriage practices of Brahmins with the nairs.
• Saraswati Vijayam stresses the importance of education for the upliftment of the lower caste.
• Premchands Sevasadan deals mainly with poor condition of woman in society. Issues like child marriage and dowry are woven into the story of the novel. (Explain each)
Additional questions:
1. Describe the contribution of Premchand to Hindi Literature.
2. Who is the author of Titash Ekti Nadir Naam? What is the theme of this novel?
3. A group at Slough in England rushed out to parish church and began to ring the church bells. Analyse this statement.
4. How is young Jane depicted in Jane Eyre?
5. Discuss some social changes in the 19th century Britain which Thomas Hardy wrote about.
6. Explain any three features of the early Bengali novels.
7. Describe how women are portrayed in Jane Austen’s novel.
8. Describe the ways in which novels in India attempted to create a sense of pan-Indian belonging.