DEMOCRACY. –Ruled by elected representatives of the people

· have parties and they guarantee right to citizens

· enhances the dignity of individual.

· Improves the quality of decision making

· Provides a method to resolve conflict 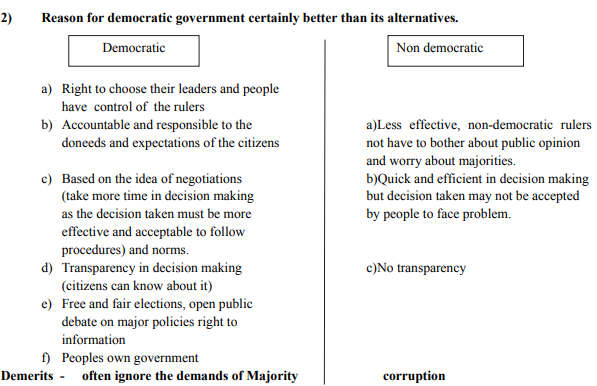 3) Contribution to economic growth and development -

· Cooperation from other countries, Economic priorities adopted by the country etc.

· The role of democracy in the reduction of inequality and poverty is not very successful.

· Some unable to meet the basic needs in life.

· Minimum needs program for the poor

6) Dignity and freedom of citizens-
• Every individual wants to receive respect from fellow beings – (all individuals are equal)
• Freedom of expression to the people –their expectations and complaints are itself a testimony to the success of democracy.
• Eg. Struggle for dignity by women, if recognized, they can always easily project (moral courage) of their problems.

SHORT ANSWER TYPE QUESTIONS [3MARKS]
1. List the factors on which the Economic development of a country depends on ?
• Country’s population size
• Global situation
• Cooperation from other countries
• Economic priorities adopted by the country

2. How does democracy produce an accountable, responsive and legitimate government?
• Democracy is a form of government in which people rule themselves through the representatives who are elected by them.
• The elected members from the government and make policies to run the administration of the country.
• The government elected by the people is also accountable to them.

3. How does democracies accommodate social diversity?
• It is necessary to understand that democracy is not simply ruled by majority opinion. The majority always needs to work with the minority
• It is also necessary that rule by majority does not become rule by majority community
• Democracy remains a democracy as long as every citizen has a choice of living in majority, at same point of time

LONG ANSWER TYPE QUESTIONS [5MARKS]
1. What is democracy? What are its various characteristics?
• Democracy is a form of government in which the supreme power is vested in the people and the representatives of the people , elected by the voters on the basis of universal adult franchise
o It promotes equality among citizens.
o It looks after the interest of the people
o It allows rooms to correct mistakes.
o Accommodation of social diversity

2. Explain the expected outcome from democracy?
•  Economic equality: It is expected from the democracy that economic inequality should be removed from our country
•  Decentralization of power: Power should be decentralized and divided from higher level to lower levels
•  Accommodation of social diversity .
•  Principles of equality -: All citizens of India should be given social justice, there should be no discrimination with any one of them basis of caste, color, creed, religion etc.

3.“ Democracy is better than any other form of government” Give arguments in favor of these statement?
Democracy is considered to be the best form of government and most of the countries in the world have adopted it. Following are the merits of democracy
•  It is based on public opinion: Democracy is that system of rule which is based on public opinion and the rule is being run according to the wish of the people
•  It is based on principles of equality: All humans in democracy are considered as equal. No one gets special privileges
•  Responsible government: Government in monarchy and dictatorship are not responsive to anyone. But government in democracy is responsible to the people and parliament
•  Strong and efficient government: Administration is being run by the representatives of the people who have the support of public. Rulers are controlled by public opinion and they are responsive to the people for their decisions
•  Accommodate all diversities and differences.

QUESTION BANK –
1. Why do some people think that democracy produces less effective government ?
2. What is known as transparency in a democracy?
3.’Democracies are based on Political Equality’ what does it mean?
4. Democracy is based on dignity and freedom-Explain
5. How can democracy be successful in bringing social harmony?

Question. Discuss any three factors that describe the successful working of democracy in India.

Factor for the success of democracy is India:

(i) Transparency of functioning with implementation of RTI Act.

(ii) It provides legitimacy as regular elections are held in India.

(iv) It provides dignity and freedom to the citizens with many fundamental rights.

Question. “Democracies lead to peaceful and harmoniums life among citizens.” Justify this statement.

Democracies lead to peaceful and harmonious life among citizens:

Democracy provides the opportunity to negotiate the differences and decide on what is better for everyone. Non-democratic regimes usually just ignore the internal problems or suppress it. Democracy ensures inclusion of every group including minorities and its interests in the decision making.

Democracy is considered better because :

(a) It promotes equality among citizens.

(b) It recognizes and enhances the dignity of the individual.

(c) It improves the quality of decision making.

(d) It provides a method to resolve conflicts.

Question. “Democracy is seen to be good in principle but felt to be not so good in practice.” Justify the statement.

Democracy is seen to be good in principles but not so good in practice because of the following reasons :

(i) The decision making process in democracy is time-taking.

(ii) The tyranny of the majority sometimes over rides the minority.

(iii) Corruption and red-tapism often tarnishes the functioning of democracies.

(iv) An illiterate and uniformed electorate fails to give itself a legitimate and accountable government.

(v) The role of dynastic politics dominates political cultures which goes against the very concept of democracy.

Question. How is democracy accountable and responsive to the needs and expectations of the citizens? Analyse.

Democracy is accountable and responsive to the needs and expectations of the citizens because :

(i) In a democracy, people have the right to choose their representatives and the people have control over them.

(ii) Citizens have the right to participate in decision making that affects them. This ensures that the working of the government is transparent.

(iii) Everybody expects the government to be attentive to the needs and expectations of itself.

(iv) It is expected that the democratic government develops mechanisms for citizens to hold itself accountable.

(v) The opposition parties can also question and criticize the government policies. They keep a check on the ruling party and make sure that it does not misuse the power.

Question. “Transparency is the most important feature of democracy.” Analyse.

Transparency is the most important feature of democracy :

(i) Democracy ensures that decision-making will be based on certain norms and procedures.

(ii) So, a citizen who wants to know if a decision was taken through correct procedures can find this out by filing R.T.I.

(iii) The citizens have the right and the means to examine the process of decision-making. This is known as transparency.

Question. Explain any three merits of democratic governments over the dictatorship.

(ii) Democracy is based on the principle of equality. All members of the state are equal in the eyes of law. All enjoy equal social, political and economic rights and state cannot discriminate among citizens on the basis of caste, religion, sex, or property. All have equal right to choose their government.

(iii) Democracy is known for its stability, firmness and efficiency. The tenure of the elected representatives is fixed. They form a stable government because it is based on public support. The administration is conducted with a sense of responsibility.

(a) In dictatorship a very select few rule over the country and they are nor answerable to the public. There is no chance of correcting a wrong policy or a decision.

(b) Since people have no say in the government functioning there is large scale dissatisfaction. The rulers generally use suppressive and coercive measures to keep the population from revolting.

(ii) Democracies fall short in elections that provide a fair chance to everyone and do not subject every decision to public debate.

(iii) The tales of corruption are enough to convince that democracies are not free of evil at all.

Please click the link below to download pdf file for CBSE Class 10 Social Science Outcomes Of Democracy Notes Set A.