Class 10 Social Science students should refer to the following concepts and notes for The Rise Of Nationalism In Europe in standard 10. These exam notes for Grade 10 Social Science will be very useful for upcoming class tests and examinations and help you to score good marks

The Rise Of Nationalism In Europe Notes Class 10 Social Science 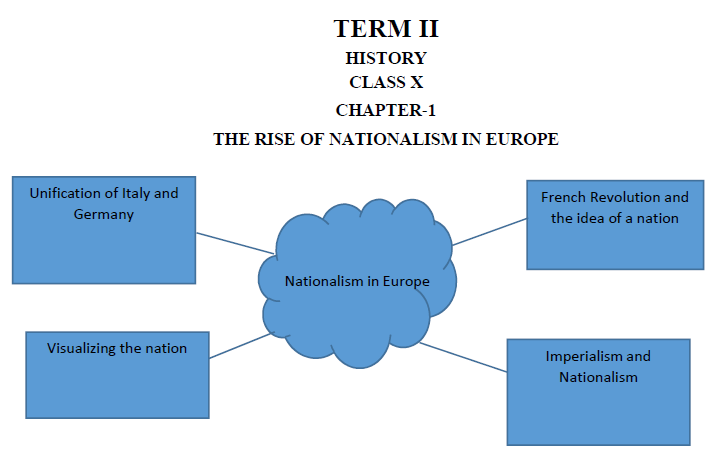 Key Concepts of the lesson- In 1848, Frederic Sorrier a French artist prepared a series of four prints visualizing his dream of a world made up of democratic and social Republic. The first print shows the people of Europe and America-men and women of all ages offering homage to Statue of Liberty.

1. The French Revolution and the idea of Nation-

· Growth of nationalism in France.

· Change of monarchy and establishment of republic, creation of new assembly.

· Rise of Napoleon and his reforms. Revolutionaries help other people of Europe to become nation.

2. The making of Nationalism in Europe.

· Germany, Italy and Switzerland were divided into Kingdom, duchies and cantons these divisions were having their autonomous rulers.

· Industrialization in England, emergence of a working class and liberalism.

· New conservation after 1815 and preservation of traditional institution.

3. The age of Revolution (1830-48)
Liberalism and Nationalism. Greek war of independence against Ottoman Empire and treaty of Constantinople. Emphasis in vernacular. Hunger hardship and popular revolt. Demand for constitutionalism and
national unification. Rights for women Results- Frankfurt Parliament (May 1848)

5. Visualizing the Nation- Representing Nationalism and ideas through female allegory such a Marianne (France) and Germania (German Nation).

6. Nationalism and Imperialism-
Last quarter of the 19th century nationalism became a narrow creed with limited ends, Intolerance Balkan became the sense of big power rivalry Nationalism, aligned with imperialism cause of World War I. Idea of a Nationalism was now same everywhere. But concept of National State was accepted universally.

• Conservatism is a political philosophy that stressed the importance of tradition, and professed gradual development to quick change.

• Giuseppe Mazzini was an Italian revolutionary and member of Secret society?

• Ottovon Bismarck was the chief minister of Prussia and was the architect of the unification of Germany.

• Romanticism was a cultural movement which sought to develop particular form of nationalist sentiments.

• Nation state is the one in which the majority of its citizens came to develop a sense of common identity and shared history or descent.

• The Treaty of Vienna was hosted by the Austrian Chancellor Duke Metternich in 1815.

• Nationalist feelings were kept alive in Poland through music and language.

• Kaiser William1 was the emperor of united Germany

• Liberalism stands for freedom of the individual and equality of all before law.

• Growth of Nationalism sparked the struggle.

• Got support from Western Europeans

• Increase in population in Europe,

3. What were the measures taken by French revolutionaries to forge a sense of collective identity?

• Through the ideas of “la patrie and le citiyon

• Composition of new system of hymns and commemoration of martyrs

• Formulating uniform laws for all citizens.

4. Explain the consequences of the Vienna congress

• The Bourbon dynasty was restored in France,

• A number of states were set up on the boundaries of France.

• Prussia was given important new territories,

• Austria got control of northern Italy,

• Russia was given part of Poland.

5. Why the 1830s were the years of great economic hardship in Europe.

• stiff competition in the market,

6. How was the history of nationalism in Britain unlike the rest of Europe?

• In Britain, the ethnic groups consisting of the English, Welsh, Scot and Irish had their own culture and political tradition.

• The English parliament had seized power from the monarchy in 1688. The act of union made Scotland to come under England. Ireland was forcibly incorporated into the United Kingdom in 1801.

• The symbols of New Britain, the British flag, the national anthem the English language were actively promoted.

LONG ANSWER QUESTION. (5 MARKS)
1. What is the other name for Napoleonic code? Write any four changes brought by this. The Napoleonic code also known as civil codes of 1804.

• Did away privileges based on birth

2. What were the ideals of liberal Nationalism?

• Equality of all before law

• Concept of Govt. by consent.

3. Explain the different stages of unification of Germany.

• Germany was group of small states before its unification.

• The liberal initiative to Nation building failed and was taken over by Prussian empire. Otto von Bismarck was the chief architect in German Unification.

• He led three wars against Austria, Denmark and France which ended in Prussian victory. In 1871 Prussian King William I, was declared German Emperor.

4. Briefly explain the unification of Italy, highlight the value you learn from this.

• During the middle of 18th century, Italy was divided into seven states of which Sardinia and Piedmont were under princely states.

• North, under Austria, Centre ruled by Pope and South ruled by Spain.

• The main leaders were Victor Immanuel II of Sardinia, Chief Minister Count Cavour Mazzini and Garibaldi. With their initiative in 1861 Victor Emmanuel was declared king of united Italy.

• Value highlighted in this is love, unity, National

• Balkan was region of Geographical and ethnic variation comprising of Romania Bulgaria, Albania Greece, and Macedonia, Croatia ‘Bosnia-Herzegovina, Slovenia, Serbia and Montenegro who were all together called slaves.

• Till the last part of 19th century, this was under Ottoman Empire. The disintegration of the Ottoman Empire and emergence of Romantic Nationalism made this region a land of conflict.

• Balkan nations tried to capture more territories from neighboring places. It also became a scene of big power rivalry like Russia, Germany, England and Austria, Hungary. Ultimately it led to open wars and finally led it to the First World War.

6. Why was Frankfurt National assembly convened? Why did it fail?
• It was convened in 1848 to vote for an all-German National Assembly.
• It drafted a new constitution for a German Nation headed by monarchy. It failed because King of Prussia joined other monarchs who were against parliament.
• The parliament was dominated by middle classes who resisted the demands of workers and artisans. At the end troops were called to disband the assembly.

Question. What do you know about the Act of Union, 1707?
Ans. It was signed between England and Scotland as a result of which the ‘United Kingdom of Great Britain’ came into being. Now, England could impose its influence Scotland.

Question. What does the German oak stand for?
(a) Heroism
(b) Potriotism
(c) Liberalism
(d) Socialism
Ans. A

Question. What did Metternick mean to say when he remarked, ‘When France sneeze, the rest of Europe catches cold’?
Ans. (i) The revolutionary spirit spread all over Europe only after the French Revolution took place in 1789. The ideas of liberty, equality and fraternity gained popularity among people all over Europe.
(ii) Educated people especially got attracted to these ideas.
(iii) The political upheaval in France that took place in July 1830 sparked revolutions in places like Brussels which led to Belgium breaking away from the United Kingdom of the Netherlands.
(iv) In this way we see that France was one of the most important countries of Europe. It spread awareness among the people of Europe.
(v) It set values and standards for the entire continent. Other countries of the continent just followed what France did.

Question. “Napoleon had, no doubt, destroyed democracy in France, but in the administrative field he had incorporated revolutionary principles in order to make the whole system more rational and efficient.” Support the statement.
Or
Explain any three features of Napoleon code.
Or
Explain any four provisions of the Napoleon civil code, 1804.
Or
Explain the revolutionary principles incorporated by Napoleon in the administration of France during his regime.
Ans. Though Napoleon was a dictator and was against democracy but he took certain measures to smoothly and proficiently run the administrative system.
(i) Napoleon reformed the French legal system because the old feudal and royal laws were very confusing and conflicting to the people.
(ii) The Napoleonic Code of 1804 was a major step in establishing the rule of law. This Code was exported to the regions under French control.
(iii) In countries like the Dutch Republic, Switzerland, Italy and Germany feudalism was abolished and peasants were freed from serfdom and manorial dues.
(iv) All privileges based on birth were taken away. The equality before the law was established and the right to property was secured.
(v) Transport and communication systems were also paid attention and were improved.
(vi) Low class people like peasants, artisans, workers and new businessmen were given more freedom.
(vii) Uniform laws were adopted for all. Be it a businessman and a small-scale producer of goods—all began to realise that uniform laws, stadardised weights and measures, and a common national currency would facilitate the movement and exchange of goods and capital from one region to another.

Question. Young Italy, a secret society was formed by
(a) Mazzini
(b) Metternich
(c) Wilhelm Wolff
(d) Bismarck
Ans. A

Question. Who was Ottoman Bismarck?
Ans. Ottoman Bismarck was the true architect of Germany who played an important role in the unification of the country. He is known for his policy of ‘Blood and Iron’.

Question. What did Germania symbolise?
(a) French nation
(b) German nation
(c) British nation
(d) None of the above
Ans. B

Question. Who were the Grimm Brothers and how did they contribute to the rise of nationalism in Europe?
Or
How did the Grimm Brothers contribute to the Nation building of Germany?
Ans. (i) The Grimm Brothers—Jacob and Wilhelm Grimm—extensively contributed to the growth of nationalism in Europe.
(ii) They collected several folk tales that expressed pure and authentic German spirit.
(iii) They became quite popular among the masses. Both the brothers also became active in liberal politics, especially the movement for freedom of the press.
(iv) They were against French domination and considered it as a threat to German culture and tried to uproot it through their sincere efforts.
(v) They considered their projects of collecting folktales as part of the wider effort to oppose French domination and create a German national identity.