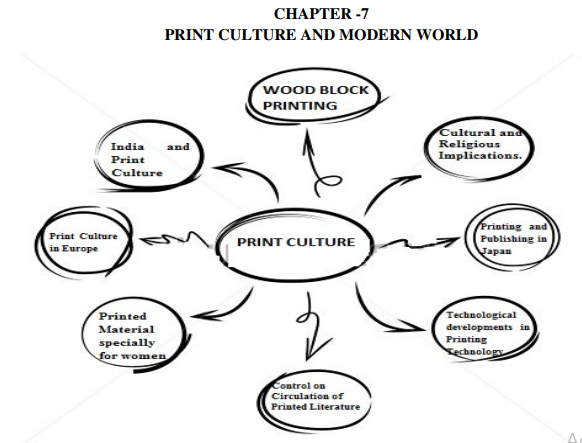 • Before the era of print or invention of Printing Press, writing of books was poorly manual affair.

• Books were handwritten and even illustrated.

• Calligraphy developed as an art during that era.

• Calligraphy means the art of beautiful and stylish writing.

• Printed Matter Chinese Tradition: Chinese were the first to have a system of recruitment of civil service personal through open examination.

• Printing remained confined to examination materials till around the 16th century.

• Trade information was circulated among the traders through printed materials.

• By 19th century mechanical printing press made their appearance in China

• The First Printing Press was invented in 1430s by Johann Gutenberg

• Johann Gutenberg’s Bible was the most beautiful books ever printed.

• Germany took the lead in revolutionizing printing all over Europe.

• The new Print Technology revolutionized the way knowledge came to be spread among the peoples. Printed books were now affordable for a much wider section of the society.

• Power driven Cylindrical Press could print up to 8000 sheets in an hour.
• Invention of Offset Printing.
• Use of electrically operated printing machines
• Use of Paper reels in place of paper sheets and photo electric control of colour register.
• Advertisement and posters were also printed.
• Publication of cheap series of books.
• India and Print Culture
• Print culture came to India with the coming of Portuguese missionaries. Konkani was the first Indian language in which books were printed.
• The first Tamil book printed was printed in 1579 and Malayalam book in 1713.
• English printing in India commenced with the publication of Bengal Gazette in 1780.
• Printed tracts played a very significant role in the spread of social reform movement in India
• Popular Prints-The Calendars and Cartoons
• Printed pictures mostly portrayed Gods and Goddesses
• Printed Material specially for women
• Books for Workers-Industrialization and invention of machines popularized printed books.
• Control on Circulation of Printed Literature- Control on the freedom of press was first introduced in 1820 by the Calcutta Supreme Court.
• Thomas Macaulay played a very important role in withdrawing restrictions on press.
• During the period of freedom struggle British Rulers restricted the freedom of the press.

SHORT ANSWERS TYPE QUESTIONS
Q.1 - :Explain any three features of handwritten manuscripts before the age of print in India?
• They were copied on palm leaves or on handmade papers.
• Pages were beautifully illustrated.
• They were pressed between wooden covers or sewn together to ensure preservation.
• Manuscripts were available in vernacular languages.
• Highly expensive & fragile.
• They could not read easily as the script was written in different styles.
• They were not widely used in everyday life.

Q.2 - :Why did the wood block method become popular in Europe?
• Production of handwritten manuscripts could not meet the ever increasing demand for books.
• Copying was an expensive, laborious and time consuming business.
• The manuscripts were fragile, awkward to handle and could not be carried around or read easily .
• By the early 15th century, woodblocks started being widely used in Europe to print textiles, playing cards and religious pictures with simple, brief texts.

Q.3 - :What was the role of new ’visual image ‘culture in printing in India?
• At the end of the 19th century a new visual culture had started.
• With the increasing number of printing presses visual images could be easily reproduced in multiple copies.
• Painters like Raja Ravi Varma produced images for mass circulation.
• Cheap prints and calendars were brought even by the poor to decorate the walls of their houses.

Q.4” - :Print popularized the ideas of the enlightenment thinkers “.Explain .
• Collectively the writings of thinkers provided a critical commentary on tradition, superstition and despotism.
• Scholars and thinkers argued for the rule of reason rather than custom and demanded that everything to be judged through the application of reason and rationality.
• They attacked the sacred authority of the church and the despotic power of the state thus eroding the legitimacy of a social order based on tradition .
• The writing of Voltaire and Rousseau was read widely and those who read these books saw the world through new eyes, eyes that were questioning critical and rational.

5 Mark Questions
Q.1 - :How print revolution led to the development of reading mania in Europe .
• As literacy and schools spread in European countries there was a virtual reading mania.
• A new forms of popular literature appeared to target new readers
• There were ritual calendars along with ballads and folk tales.
• In England penny chapbooks were carried by petty peddlers known as Chapman and sold for a Penny, so that even the poor could buy them.
• In France these low priced books were called Bibliotheque Bleue as they were bound in cheap blue covers.
• There were romances, histories, books of various sixes, serving developed to combine information on current affairs with entertainment.
• Periodical pressed developed to combine information on current affairs with entertainment.
• The idea of scientists and scholars had now become more accessible to the common people.
Q.2 - :How did oral culture enter print and how was the printed material transmitted orally? Explain Oral culture entered print into the following ways –
• Printers published popular ballads and folktales .