Class 10 Social Science students should refer to the following concepts and notes for Lifelines Of National Economy in standard 10. These exam notes for Grade 10 Social Science will be very useful for upcoming class tests and examinations and help you to score good marks 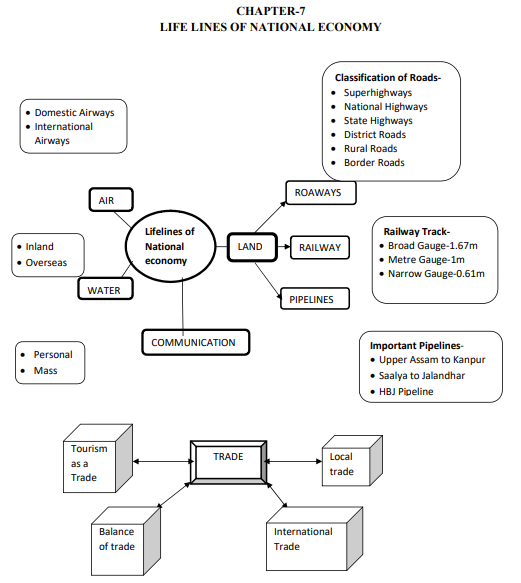 India has one of the largest road networks in the world. Its importance can be viewed.

(i) Construction cost of roads is much lower.

(iii) Roads can negotiate higher gradients of slope & as such can traverse mountains.

(iv) It is economical.

(vi) It is used as feeder to other modes of transport.

- The distribution pattern of the railway network in the country has been largely influence by physiographic, economic and administrative factors.

- The Himalyan mountains regions are unfavourable for the construction of railway lines due to high relief sparse population & each of economic opportunities.

- Rivers also create problem for lay down of railway tracts.

Pipelines transport network is a new arrival on the transportation map of India. Its initial cost is high but subsequent running costs are minimal. It is used for transporting crude oil, petroleum product & natural gas.

2. From Salaya in Gujarat to Jalandhar. In Punjab via Viramgam, Mathura, Delhi & Panipat.

3. Gas pipelines from Hazira in Gujarat connects Jagdishpur in UP via Vijaypur in Madhya Pradesh.

- The exchange of goods among people; states & countries is referred to as trade. Trade between two countries is called International Trade.

- Exports and imports are the components of trade. The balance of a trade of a country is the difference b/w its export and import.

VI. Tourism as a Trade :

- Tourism has proved itself as one of the most important. aspect of trade. Tourism in India has grown substantially. It helps as

- Development of international understanding about our culture and heritage.

· Road Density -The length of road per 100 sq kms of area is known as density of roads.

1. The development of a country depends upon the production of goods and services as well as their movement to their destination. Transport plays an important role in the economy. Because of transport, raw materials reach to the factory or industry and finished products reach to the consumer. Transport has helped in both production and distribution of goods.

2. Apart from transport, mode of communications, like telephone and internet makes flawless flow of information possible. Today, the world has been converted into a large village with the help of efficient and fast moving transport and developed communication system.

3. Transport can be classified into land, water and air transport.

4. Roadways
India has one of the largest road networks in the world. Roadways have preceded railways. The growing importance of road transport in comparison with rail transport is because the construction cost of roads is much lower. It provides door to door services and thus the cost of loading and unloading is much lower. It is used as feeder to other modes of transport.

6. Roads can also be classified on the basis of the type of material used for their construction such as metalled and unmetalled roads. Metalled roads are all weather roads whereas unmetalled roads go out of use in the rainy season.

7. Road density means the length of road per 100 sq. km of area. Distribution of road is not uniform in the country. Density of all roads varies from only 10 km in Jammu & Kashmir to 375 km in Kerala with the national average of 75 km.

8. Railways
The Indian railways have a network of 7,031 stations spread over a route length of 63,221 km with a fleet of 7817 locomotives, 5321 passenger service vehicles, 4904 other coach vehicles and 228,170 wagons as on 31 March, 2004. The Indian railways is the largest public sector undertaking of India. The first train steamed off from Mumbai to Thane in 1853, covering a distance of 34 km. It is organised into 16 railway zones. Lifelines of National Economy

9. Railways are the prime mode of transportation for goods and passengers in India. Railways also make it possible to conduct varied activities like business, sightseeing and pilgrimage along with transportation of goods over longer distances.

10. The distribution pattern of the railway network in the country has been largely influenced by physiographic, economic and administrative factors.

12. Today, the railways have become more important in our national economy than all other means of transport put together. However, rail transport suffers from certain problems as well. For example, many passengers travel without tickets.

14. Initial cost of laying pipelines is high but subsequent running costs are minimal. It rules out trans-shipment losses or delays.

15. Waterways are the cheapest means of transport. They are most suitable for carrying heavy and bulky goods. It is a fuel-efficient and environment friendly mode of transport.

16. India has inland navigation waterways of 14,500 km in length. Out of these only 3,700 km are navigable by mechanised boats. The workable waterways include the Godavari, Krishna, Barak, Sunderbans, Buckingham canal, Brahamani, East-West canal and Damodar Valley Corporation Canal. The following waterways have been declared as the National Waterways by the Government:
— The Ganga river between Allahabad and Haldia (1620 km)—N.W. No. 1.
— The Brahmaputra river between Sadiya and Dhubri (891 km)—N.W. No. 2.
— The West-Coast Canal in Kerala (Kottapurma-Komman, Udyogamandal and Champakkara canals-205 km)—N.W. No. 3.

18. The name of some major ports are—Kandla, Mumbai, Vishakhapatnam, Paradip, Kolkata, etc. Mumbai is the biggest port with a spacious, natural and well-sheltered harbour.

19. The air travel is the fastest mode of transport. It can cover difficult terrains and long oceanic stretches with great ease. The air transport was nationalised in 1953. Airways are of two types—Domestic and International.

23. Six mail channels have been introduced by Indian postal network for quick delivery of mails in large towns and cities.

24. India has one of the largest telephone networks in Asia. Special provisions have been made by the government by extending twenty-four hours STD facility to every village in the country to strengthen the flow of information.

25. Mass Communication is a communication in which masses are communicated at the same time by one source. Mass communication provides entertainment and creates awareness among people about various national programmes and policies. It includes radio, television, newspapers, magazines, books and films.

26. All India Radio (Akashwani) broadcasts a variety of programmes in national, regional and local languages for various categories of people, spread over different parts of the country.

27. Doordarshan is the national television channel of India. It is one of the largest terrestrial networks in the world. It broadcasts a variety of programmes from entertainment, education to sports, etc. for people of different age groups.

29. India is the largest producer of feature films in the world. It produces short films, video feature films and video short films. The Central Board of Film Certification is the authority to certify both Indian and foreign films.

30. The exchange of goods among people, states and countries is referred to as trade. The market is a place where such exchanges take place. Trade between two or more countries is termed as international trade but trade which occurs in a region within the same country is called local trade. It may take place through sea, air or land routes. Export and import are the components of trade. The difference between export and import is known as balance of trade.

31. India has trade relations with all the major trading blocks and all geographical regions of the world. Among the commodities of export are the agricultural and allied products, ores and minerals, gems and jewellery, chemical and allied products, engineering goods and petroleum products. Major imports are petroleum and its products, pearls and precious stones, inorganic chemicals, coal, coke and briquettes and machinery.

33. Our country earns foreign exchange through tourism. More than 15 million people are directly engaged in the tourism industry.

4. Golden Quadrilateral Super Highways: These are six lane highways connecting major cities and ports of the country for speedy movement of goods and passengers.

5. Rural roads: Roads which link rural areas and villages with towns are classified as rural roads.

6. Border roads: Strategically important roads in the bordering areas of the country are called border roads.

1. Transport : Movement of people and goods from one place to another place is called transport.

2. Traders : Traders are the people who make the products come to the consumers by transportation.

5. State Highways : Roads linking a state capital with different district headquarters are known as State Highways. These roads are constructed and maintained by the State Public Works Department (PWD) in State and Union Territories.

6. District Highways : District highways are roads that connect the district headquarters with other places of the district. These roads are maintained by the Zila Parishad.

10. Air Transport : Air transport is a transportation system for moving passengers or goods by air.

11. Communication : The imparting or exchanging of information by speaking, writing, or using some other medium is called communication.

12. Mass Communication : Mass communication provides entertainment and creates awareness among people about various national programmes and policies. It is the means through which one can communicate with several people at the same time.

13. Land Transport : Land transport is the transport or movement of people, animals and goods from one location to another on land. Two main forms of land transport are rail transport and road transport.

15. Border Roads : Border Roads Organization, a Government of India undertaking, constructs and maintains roads in the bordering areas of the country.

2.Write three advantage of waterways.
• Cheapest means of transport,can carry heavy and bulky goods, do not cause air pollution.

LONG ANSWER TYPE
1. What are the advantages of transport?
• Facilitates easy and free movement of people from one place to another.
• Helps to carry goods and materials from one place to another
• Helps in production and distribution of goods.
• Connect markets with the production centres.
• Promotes easy accessibility of goods and services.
• Helps in development of trade and commerce.
• Helps to increase the volume of the Trade.

2. What are the problems faced by Indian roadways?
• Road network is inadequate for increasing volume of traffic.
• About half of the roads are unmetalled.
• The National Highways are inadequate and are poorly maintained.
• The roadways are highly congested in cities and are lacking safety measures.
• Most of the bridges and culverts are old and narrow.
• Lack of proper security measures.

3. What are the Problems Faced by Indian Railways?
• Requires huge investment at the time of installation.
• Maintenance and upkeep is very costly.
• Construction is difficult and costly in uneven and high hills and deserts.
• Not suitable for transportation of perishable goods.
• Ticket-less travellers.
• Thefts and damaging of railway property.
• Unnecessarily chain pulling to stop train.
• Gauge Conversions.
• Sinking and slipping of tracks in rains.
• Modernization and Electrification.

4. Why is transport and communication called lifelines of a country?
• Connects far lying areas of the country
• They benefit trade and commerce
• Help in the development of agriculture and industry.
• Helpful during calamities
• Promotes unity of the country