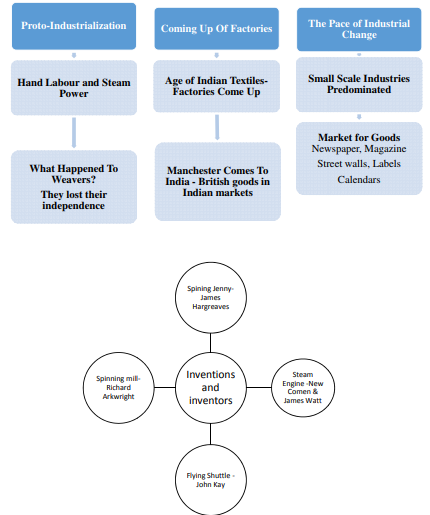 IMPORTANT CONCEPTS OF THE LESSON
1. An association of craftsmen or merchants following same craft to protect
2. The members interest and supervise the standard of the work.
3. Tanning. Convert raw hide into leather by soaking in liquid containing tannic acid.
4. Food processing. Technique of chopping and mixing food for making jam, juices, etc.
5. Victorian Britain. Britain during the reign of Queen Victoria.
6. Brewery. A place where beer etc. is brewed commercially. Brewing is a process of infusion, boiling and fermentation.
7. Vagrant.A person without a settled home or regular work.
8. Bourgeois.The upper middle class.
9. Gomastha .An Indian word meaning an agent, a middle man between the merchant and weavers.
10. Stapler.A person who staples or sorts wool according to its fibre.

INDUSTRIALISATION
Production of goods with the help of machines in factories
• The first industrialized Nation-Britain
• Features
• Handmade goods to machine made goods in factories, cottage to factory, large scale
production, started in
• England in later parts of 18th Century. In course of time, it affected all systems of production.
Orient. Countries to the east of Mediterranean Sea usually referring to Asia.

COMING UP OF FACTORIES
• Early factories in England came up by the 1730s .
• First symbol of new era -cotton mill
• Many factories sprang up in England
• A series of inventions in carding, twisting, spinning and rolling .

THE PACE OF INDUSTRIAL CHANGE
• Cotton and iron and steel industries were the most dynamic industries .
• New industries could not displace traditional ones
• Technological changes occurred slowly
• Steam engine invented by James Watt had no buyers for years .
• New technologies were slow to be accepted .

HAND LABOUR AND STEAM POWER
• In Victorian Britain there was no shortage of human labour .
• In many industries the demand for labour was seasonal .
• Range of products could be produced only with hand labour .
• Demand for intricate design .
• Upper classes preferred things produced by hand .

LIFE OF THE WORKER
• Abundance of labour affected the life of workers badly .
• Labour was seasonal .
• Fear of unemployment made workers hostile to new technology
• Women labours protested against the introduction of spinning jenny .
• Introduction of railways opened greater opportunities .

INDUSTRIALISATION IN THE COLONIES
• Textile industry was the Centre of industrialization in India .

WHERE DID THE WORKERS COME FROM?
• Most of the workers came from Indian villages .

SMALL SCALE INDUSTRIES PREDOMINATED
• Most of the Industries were located in Bengal and Bombay .
• A small portion of total industrial labour worked in factories .
• Use of fly shuttle increased handicraft .

Please click the link below to download pdf file for CBSE Class 10 Social Science- The Age Of Industrialization.