NEET Biology Reproductive Health MCQs Set B with answers available in Pdf for free download. The MCQ Questions for NEET Biology with answers have been prepared as per the latest 2021 NEET Biology syllabus, books and examination pattern. Multiple Choice Questions form important part of competitive exams and NEET exam and if practiced properly can help you to get higher rank. Refer to more topic wise NEET Biology Questions and also download more latest study material for all subjects and do free NEET Biology Mock Test 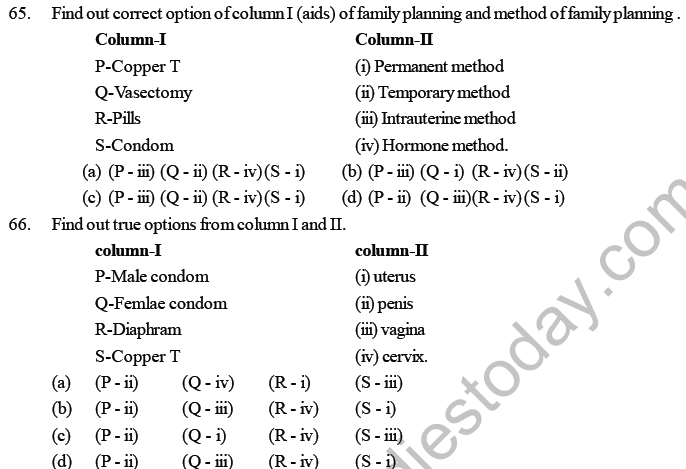 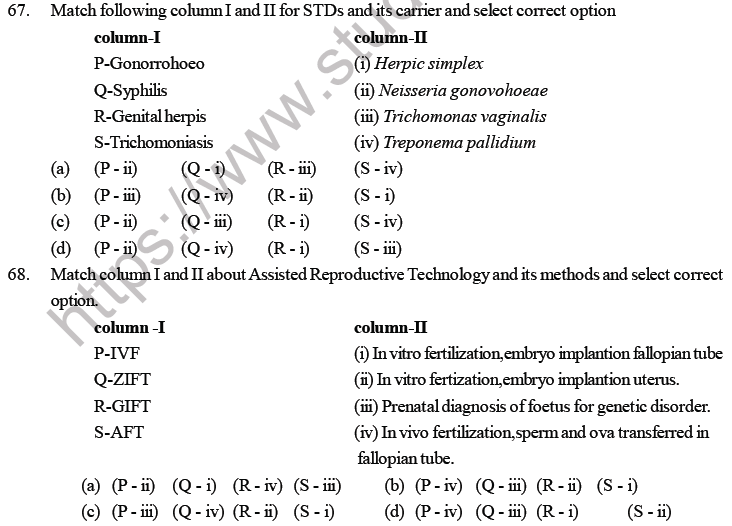 69. Which is not true for population explosion ?
(a) Increased rate of industrialization and urbanization.
(b) Encrochment on land ,air and water.
(c) scarecity of food , habitat and clothes.
(d) country develops more.
70. Given statement A and reason-R find out correct statement out of given option .
A (statement) Reproductive health is define by WHO.
R (reason) It is a world health organization.
(a) A is correct but R is an explaination of X.
(b) A is correct but R done give correct explaination of X
(c) A is correct and reason R is wrong.
(d) A is not correct and reason R is correct. 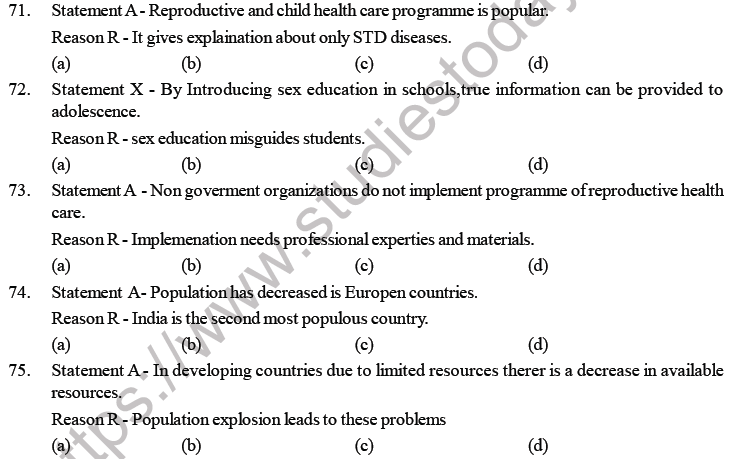 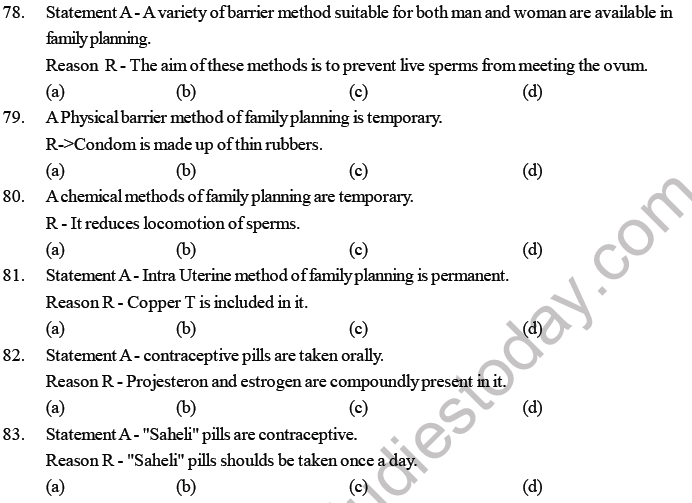 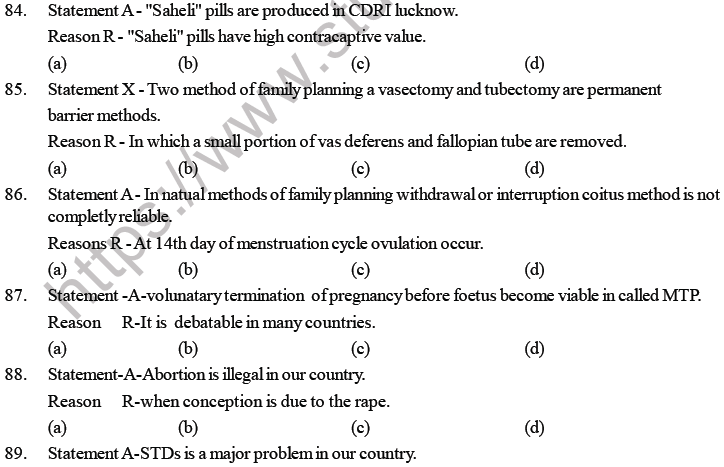 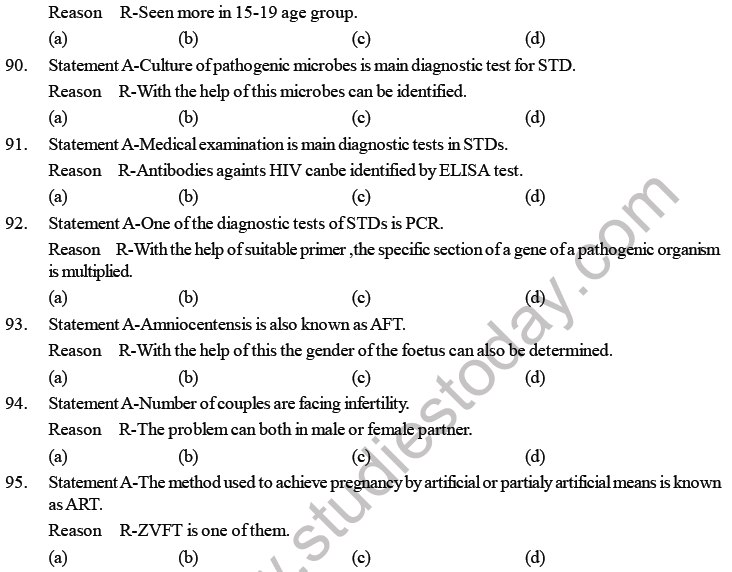 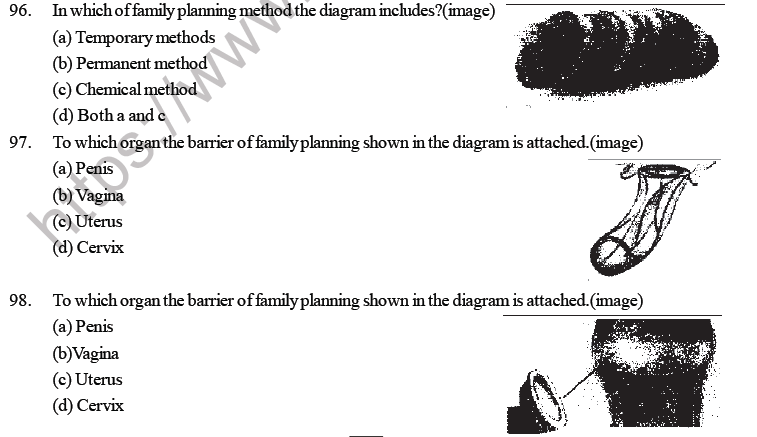 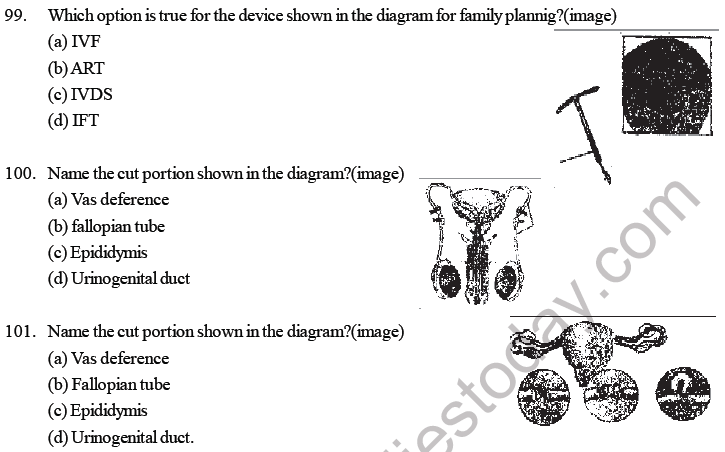 102.What is the function of copper-T
(a) Checks mutation (b) Stop fertilization
(c) Stops zygote formation (d) Stops oblituation of blastocoel
103. A contraceptive pill contains_____
(a) Progesterone and estrogen (b) Oxytocin
(c) Relaxin (d) None of these
104. Trade name of weekly oral contraceptive pill is
(a) Mala (b) Shaheli (c) Mala-A (d) Mala-D
105. Amniocettesis involves the analysis of
(a) Amnion (b) Body fluid of amniotes
(c) Amino acids of protein (d) Amniotic fluid
106. In amniocentesis the fluid is taken from
(a) Foetal blood (b) Mother's blood
(c) Body fluid of mother (d) Fluid surrounding foetus
107. Daily oral contraceptive pill is
(a) Mala C (b) Mala M and Mala D
(c) Mala A (d) Mala D
108. Cu ions released from copper releasing Intra uterine devices (IUDS)
(a) Prevent ovulation (b) Make uterus unsuitable for implantation
(c) Increase phagocytosis of sperms (d) (b)and(c)both
109. Medical termination of the pregnancy (MTP)is considered safe up to how many weeks of pregnancy.
(a) Six weeks (b) Eight weeks (c) Twelve weeks (d)Eighteen weeks
110. Which one of the following is the most widely accepted method of contraception in india at present?
(a)IUDs (b) Cervical caps (c) Tubectomy (d) Diaphragms
111. Saheli is
(a) An oral contraceptive for females (b) A surgical sterilization method for females
(c) A diaphragm for females (d) A surgical method of sterilization in male 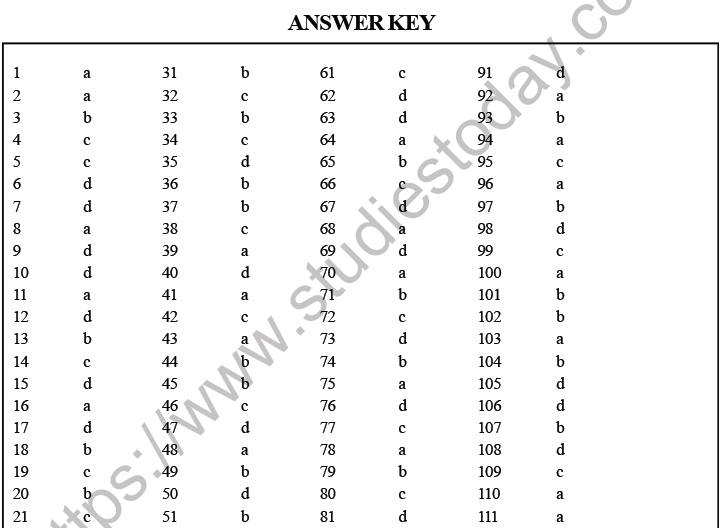