NEET Biology Life Processes Control and Coordination MCQs Set B with answers available in Pdf for free download. The MCQ Questions for NEET Biology with answers have been prepared as per the latest 2021 NEET Biology syllabus, books and examination pattern. Multiple Choice Questions form important part of competitive exams and NEET exam and if practiced properly can help you to get higher rank. Refer to more topic wise NEET Biology Questions and also download more latest study material for all subjects and do free NEET Biology Mock Test

1. What is the weight of an adult person's brain
(A) 900 (B) 1350 (C) 1500 (D) 2350
2. What is called of movement occurred in a plant due to light ?
(A) Thermonestry (B) Thigmonesty
(C) Yearmonesty (D) Photonesty
3. Insulin hormone is secreted by ....... gland -
(A) lymphatic gland (B) Salivary gland
(C) Pancreas (D) Pituatry gland
4. An enzyme secreted by an endocrine gland which is present in an exocrine gland :
(A) Paratharmone (B) Thyroxin
(C) Glucagon (D) Adrinalin
5. Which of the following activity is controlled by medulla oblongata ?
(A) Maintain balance of the body
(B) Peristalitc movement alimentary canal
(C) Controlling body temperature
(D) Facial expression 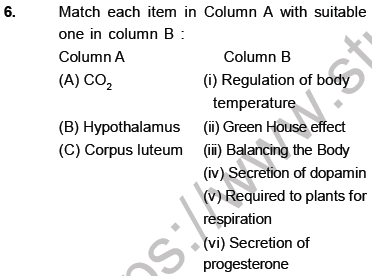 (A) A = (v), B = (iii), C = (iv)
(B) A = (ii), B = (i), C = (iv)
(C) A = (ii), B = (i), C = (vi)
(D) A = (v), B = (ii), C = (vi)
7. Which of the following is a plant hormone ?
(A) Insulin (B) Thyroxin
(C) Cytokinin (D) Oestrogen
8. The hormone present in higher concentration in fruits and seeds is
(A) Auxin (B) Gibberellin
(C) Cytokinin (D) Ethylene
9. The outermost layers of meninges is
(A) Myelin membrane (B) Arachnoid mater
(C) Dura mater (D) Pia mater
10. Which part of the human brain is more developed that other mammals :
(A) Cerebellum (B) Cerebrum
(C) Sensory lobes (D) none
11. In plants "Auxin" is used for____
(A) Division of cell
(B) Ripening of fruits
(C) Root growth inhibition
(D) Elongation and division of cell
12. Which hormone is not found in plants ?
(A) Gibberellin (B) Auxin
(C) Cytokinin (D) Glucagon
13. Phototropic and geotropic response of a plant is under control of following harmone :
(A) Auxin (B) Gibberlin
(C) Cytokinin (D) Ethylene
14. Spinal cord originates from :
(A) Cerebrum (B) Cerebellum
(C) Medulla (D) Pons
15. Which one of the following represents the correct sequence of reflex action ?
(A) Receptor → Sensory nerve → motor nerve→ spinal cord → muscle
(B) Receptor → motor nerve →spinal cord →sensory nerve → muscle
(C) Receptor → Sensory nerve → spinal cord → muscle → motor nerve
(D) Receptor → sensory nerve → spinal cord → motor nerve → muscle
16. Which of the following cannot be considred as a receptor ?
(A) Muscle (B) Ear
(C) Eye (D) Nose
17. The part of brain which controls the balance and psture of the body is
(A) Cerebellum (B) Cerebrum
(C) Pons (D) Medulla
18. Growth of plants is not promoted by
(A) Cytokinins (B) Auxins
(C) Gibberellins (D) Abscisic acid
19. Which one of the following pairs is not correct?
(A) The pituitary gland - Adrenalin
(B) Pancreas - Insulin
(C) Ovary - Estrogen
(D) Testis - Testosterone
20. Find the odd man out
(A) Gonadotrophins (B) Thyrotrophins
(C) Corticotrophins (D) Vasopressin
21. Involuntary actions like blood pressure salivation and vomiting are controlled by this part of hind brain
(A) Medals (B) Cerebellum
(C) Medulla (D) Cerebrum
22. The endocrine gland in which both exocrine and endocrine parts are present :
(A) Pancreas (B) Adrenal gold
(C) Thyroid (D) Pitutary gland
23. Iodine is necessary for the synthesis of which of the following hormones :
(A) Insulin (B) Adrenaline
(C) Thyroxine (D) Auxin
24. An injury in accident has disturbed regulation of body temperature, water balance and hunger. The part of brain effected is :
(A) Cerebellum (B) Cerebrum
(C) Medulla oblongata (D) Hypothalamus
25. If a rat is given an injection of sodium iodide with radioactive iodine, then in which of the following most of iodine, then in which of the following most of iodine would be incorporated?
(A) Cartilage (B) Thyroid
(C) Parathyroid (D) Lymph nodes
26. Which among the following hormones is associated with wilting of leaves ?
(A) Abscisic acid (B) Gibberellin
(C) Cytokinin (D) Auxin
27. Synapse is
(A) gap between two muscle cells
(B) gap between two bones
(C) gap between two neurons
(D) gap between muscle and bone
28. Which of the folllowing plant hormones induces cell division ?
(A) Auxin (B) Gibberelin
(C) Ethylene (D) Cytokinin
29. Central Nervous system consists of brain and
(A) Spinal cord
(B) Spinal nerves
(C) Cranial nerves
(D) All the above