NEET UG Biology Biomolecules 1 MCQs with answers available in Pdf for free download. The MCQ Questions for NEET Biology with answers have been prepared as per the latest NEET Biology syllabus, books and examination pattern. Multiple Choice Questions form important part of competitive exams and NEET exam and if practiced properly can help you to get higher rank. Refer to more topic wise NEET Biology Questions and also download more latest study material for all subjects and do free NEET Biology Mock Test

The Substances which are formed due to bond formation between C and H are called organic substances. A carbohydrate molecule contains Carbon, Hydrogen, and Oxygen. The ratio of H and O is generally 2 : 1 as water (H2O)

-Carbohydrates have the general formula of Cn(H2O)m.

-Carbohydrates can be divided into three main types. These are,

-Ribose and Deoxy ribose are both pentose monosaccharide and are found in RNA and DNA.

-Lipids are of three types,

-Lipids are the food stuffs of highest Calorific value and they are stored in the body as a reserve food.

7. Which the following is the word regarding steroids is not correct?

8. Which of the following statement regarding to properties of starch is not correct?

a) Present of amylose and amylopectin chains.

b) Stored food in plants.

9. Which one of the following pairs is not correctly matched?

10. Which the folowing pair regarding to biological importance of carbohydrates is not correctly matched?

a) Cellulose→Forms the plant cell wall.

b) Glycogen →Reserve food in animals.

11. Which the following regarding to examples of Keto sugar is not correctly?

a) Fructose b) Ribulose b) Ribose sugar d) Dihydroxy acetose.

12. Which of the following pairs is not correctly matched?

13. Which of the following option is not correctly for this molecule?

a) It is Keto hexoses sugar. b) Hydrolysis of a molecule of maltose

c) It can pass through the cell membarane d) Found in the juice of fruits.

14. Which one of the following pairs is not correctly matched?

15. Which one of the following pairs is not correctly matched?

b) Starch – amylase and amyloprectin.

16. Which one of the following pairs is correctly matched?

17. Lipids are relatively insoluble in….

a) Chloroform b) Water

18. Which of the following statement regarding the Fatty acid is not correct?

a) Unsaturated fatty acids are two successive carbon atoms at certain places therein are linked by a double bond.

b) Saturated fatty acids are capable of accepting hydrogen or halogen atoms.

19. Which of the following statement regarding to Lipid is not correct?

b) The lipids are a heterogenous group of compounds related to Fatty acids.

c) Lipids are the important constituents of the diet because of their high energy value.

d) Lipids are formed of C, H and O atoms, The number of H atom is less than ahat of O.

20. Which of the following statement regarding to Amylase is not correct?

a) Unbranched polysaccharide chains made up of glucose units.

b) Amylase occur in the constitution of glycogen.

d) None of these

21. Which of the following statements are true?

P : Those which have molecular weights 596 Dalton are called micromolecules.

Q: Those which have molecular weights 1288 Dalton are called macromolecules.

R: Lipids have molecular weight more than ten thousand Dalton and above.

22. Which of the following options suggest number of carbons in descending order?

23. In the formation of triglyceride, glycerol get linked with any Fatty acids by…

Which of the following the correct option for statement P and statement Q.

Q : In the structure of wax an alcohol molecule is one monohydroxy alcohol

25. P : The presence of lipid is inevitable for the activity of glucose phosphatase.

Q : Copper is co-factor for the activation of enzymes like phosphatase.

27. P : In animal the food is stored as glycogen

Q : Amylase and amylopectin are occuring in the constitution of glycogen.

28. Which of the following structure shows the molecules?

d) None of these 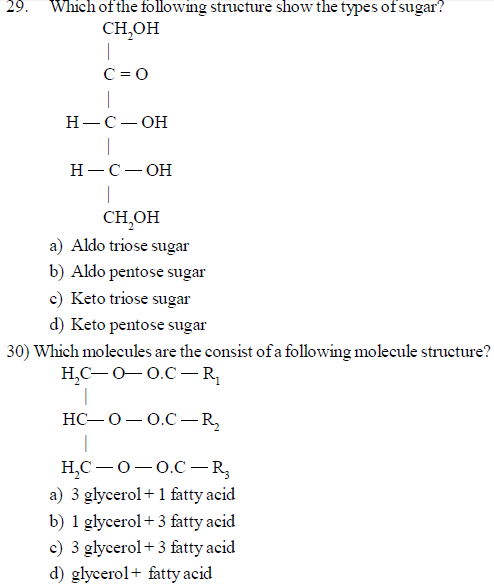 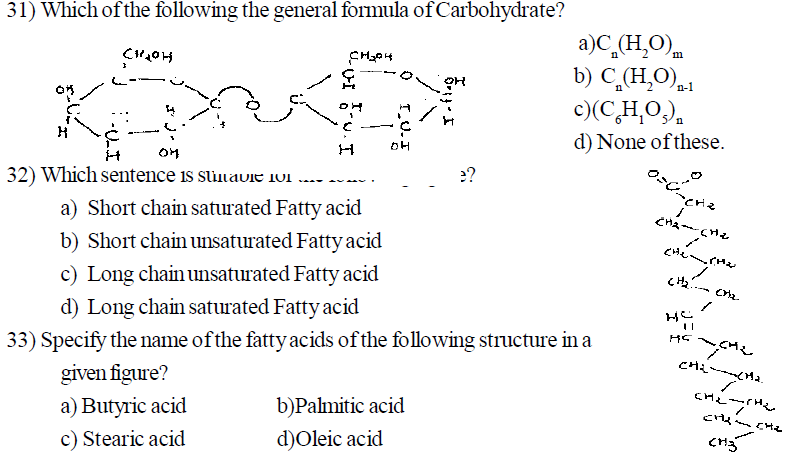 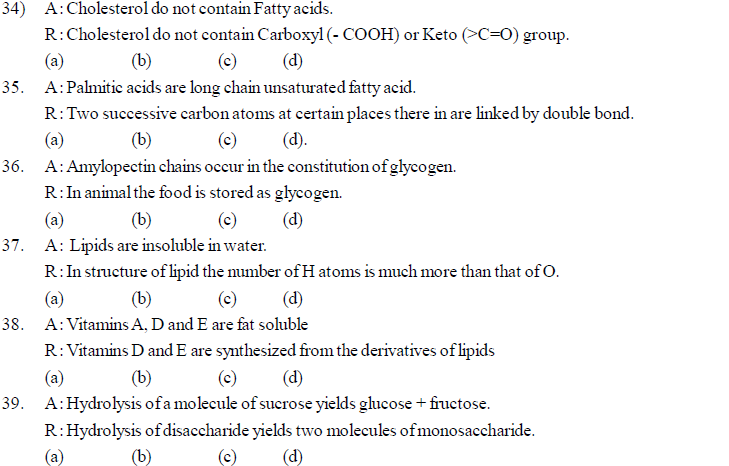 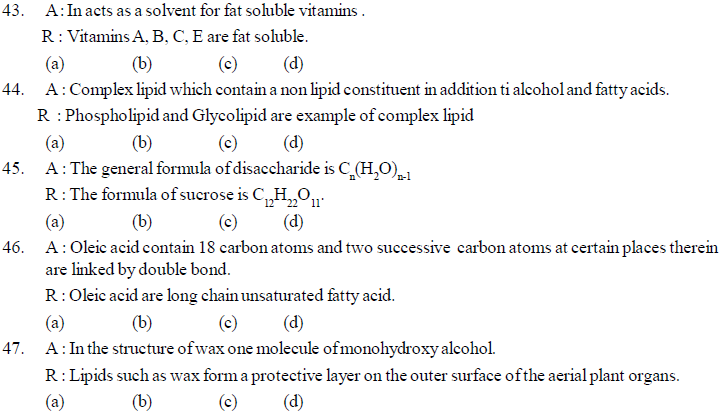 52. Which of the following group is not organic group?
a) Fats, Proteins , Enzymes, Hormones.
b) Co-factors, Hormones, Water, Minerals.
c) Proteins, Carbohydrates, Nucleic acid, Hormones.
d) Proteins, Carbohydrates, Fats, Enzymes.
53. The middle Lamella is made up of ____
a) Muramic acid b) Calcium pectate
c) Phosphoglycerol d) Hemicellulose.
54. The chemical formula of starch is ___
a)(C6H10O5)n b)(C6H12O6)n
c)C12H22O11 d)CH3COOH
55. Find out the wrongly matched pair
a) Primary metabolite - Ribose.
b) Secondary metabolite - Insulin.
c) Protein - Insulin.
d) Cellulose - Heteropolymer.
56) Chitin is a ___
a) Polysaccharide
b) Nitrogenous polysaccharide
c) Lipoprotein
d) Protein
57. In a polysaccharide, the individual monosaccharides are linked by a ____
a) Glycosidic bond
b) Peptide bond
c) Ester bond
d) Phosphodiester bond
59. Carbohydrates are commonly found as starch in plant storage organs which of the following five properties of starch make it useful as a storage material?
P. Easily transported.
Q. Chemically non reactive.
R. Easily digested by animals.
S. Osmotically inactive.
T. Synthesized during photosynthesis.
a) P, R and T b) P and T
c) Q and R d) Q and S
59. Match the items in column-I with items in column-II and the correct answer.
Column – I           Column – II
P Triglyceride         i  Animal hormones
Q Membrane lipid   ii Feathers and leaves
R Steroid               iii Phospholipids
S Wax                   iv Fat stored in the form of droplets.
a) P iv Q iii R i S ii
b) P iv Q i R iii S ii
c) P iii Q iv R i S ii
d) P iv Q i R ii S iii
60. Find out the correct combination
i) Triose sugar – Ribose.
ii) Starch – amylase and amylopectin
iii) Plasma membarane – phospholipid
iv) Malanin – sterols
v) Pitutary hormones – peptide.
a) Only ii, iii and iv
b) Only I, ii and iii
c) Only I and iii
d) Only ii, iii and v
61. Generally protein and carbohydarte components are found in cow milk…
a) Albumin, Lactose
b) Globulin, Casin
c) Casin, Lactose
d) Casin, Fructose
62. Starch and Cellulose are the compounds made up to many units of ____
a) Simple sugar
b) Fatty acid
c) Glycerol
d) Amino acid
63. Which of the following is the characteristic of plants ___
a) Glucose and Cellulose
b) Pyruvic acid and Glucose
c) Cellulose and Starch
d) Starch snd Pyruvic acid
64. Most common monomer of Carbohydrate is _____
a) Glucose b) Fructose
c) Sucrose d) Maltose
65. Lipids are insoluble in water because lipid molecules are _____
a) Neutral b) Zwitter ions
c) Hydrophobic d) Hydrophillic
66. Given below is the chemical formula is

a) Palmitic acid b) Stearic acid
c) Glycerol d) Galactose
67. Given below chemical formula is ____
CH3(CH2)CH = CH(CH2)7COOH
a) α - ketoglutarate b) Oxalosuccinet
b) Oleic acid d) Linolic acid.
68. Which of the following is not a disaccharide?
a) Maltose b)Starch c) Sucrose d)Lactose
69. The repeating unit of Glycogen is _____
a) Fructose b) Mannose c) Glucose d) Galactose
70. Maltose are insoluble in ____
a) Water b) Alcohol c) Acid d) Basic
71. Which is an organic component found in most cells?
a) Glucose b) Lignin c) Sodium chloride Oxygen 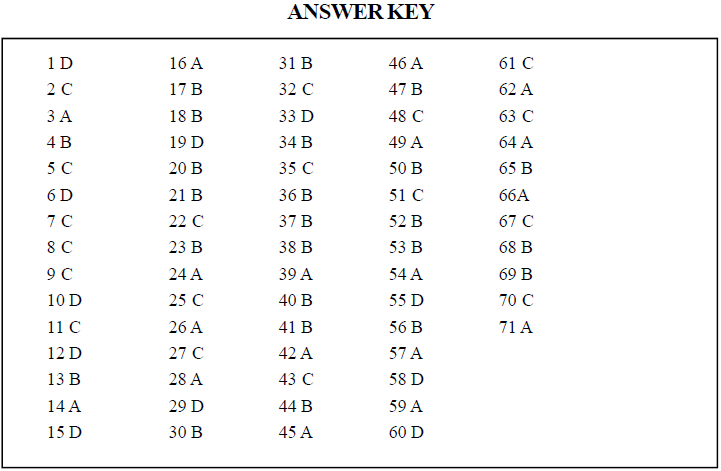