DEBENTURES :A debenture is a document that either creates a debt or acknowledges it. In corporate finance, the term is used for a mediumto longterm debt instrument used by large companies to borrow money. In some countries the term is used interchangeably with bond, loan stock or note. A debenture is thus like a certificate of loan or a loan bond evidencing the fact that the company is liable to pay a specified amount with interest and although the money raised by the debentures becomes a part of the company’s capital structure, it does not become share capital.

Convertibility point of view : there are two types of debentures:

Convertible debentures, which are can be converted into equity shares of the issuing company after a predetermined period of time.

These may be Partly Convertible Debentures (PCD): A part of these instruments are converted into Equity shares in the future at notice of the issuer. The issuer decides the ratio for conversion. This is normally decided at the time of subscription.

debentures, which are simply regular debentures, cannot be converted into equity shares of the liable company. They are debentures without the convertibility feature, they usually carry higher interest rates than their convertible counterparts. On basis of Security, debentures are classified into:∙

Secured Debentures: These instruments are secured by a charge on the fixed assets of the issuer company. So if the issuer fails on payment of either the principal or interest amount, his assets can be sold to repay the liability to the investors

Unsecured Debentures: These instrument are unsecured in the sense that if the issuer defaults on payment of the interest or principal amount, the investor is treated like along other unsecured creditors of the company .

From redemption point of view

Redeemable Debentures:Redeemable debentures are those which are redeemed or paid off after the termination of fixed term. The amount paid off includes the principal amount and the current year’s interest. The company always has the option of either to redeem a specific number of debentures each year or redeem all the debentures at specified date.

Irredeemable or Perpetual Debentures:Irredeemable debentures are those debentures which do not have any fixed date of redemption. They are redeemed either in the event of winding up or at a very remote period of time. Irredeemable or perpetual debenture holders can never force the company to redeem their debentures.

Debentures can be issued in two ways

2. for consideration other than cash

Terms of issue of: Debentures can be issued in two ways

1 .Issue of Debentures at Par

2. Issue of Debentures at Premium

2. Second instalment paid on allotment is called as allotment money

3. Subsequent instalments paid are called as call money calls can be more than one and called First call, second call or as the case may be ISSUE OF Debentures FOR CASH AT PAR : This means shares are issued at face value 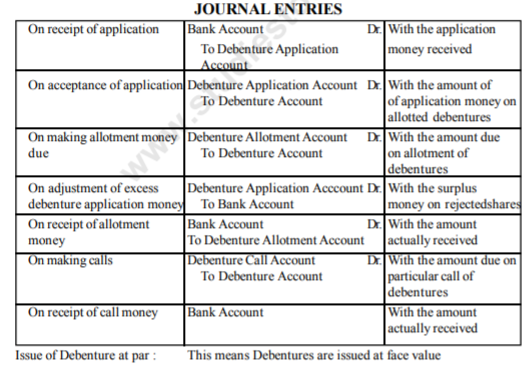 Download past year Question Papers for Class 12 Accountancy as per CBSE NCERT KVS syllabus with solutions in pdf free
More..

Download Worksheets for Class 12 Accountancy made for all important topics and is available for free download in pdf, chapter wise assignments or booklet with...
More..

Access free T.S. Grewal's Solutions for all books for CBSE Class 12. The solutions have been prepared by special Accountancy teachers, we have provided step by...
More..

Re verification of Class 10 Board Exams Marks

Modalities and Schedule for Secondary School (Class X) Examinations, 2020 in the subjects whose examinations have been conducted by CBSE for the processes of (I) Verification of Marks (II) Obtaining Photocopy of the Evaluated Answer Book(s) (Ill) Re-evaluation of Marks...