Download printable Social Science Class 7 Worksheets in pdf format, CBSE Class 7 Social Science The Mughal Empire Worksheet Set B has been prepared as per the latest syllabus and exam pattern issued by CBSE, NCERT and KVS. Also download free pdf Social Science Class 7 Assignments and practice them daily to get better marks in tests and exams for Grade 7. Free chapter wise worksheets with answers have been designed by Standard 7 teachers as per latest examination pattern

Class 7 Social Science students should refer to the following printable worksheet in Pdf for The Mughal Empire in Grade 7. This test paper with questions and solutions for Standard 7 Social Science will be very useful for tests and exams and help you to score better marks

I. FILLIN THE BLANKS:

IV. ANSWER IN TWO POINTS:
1. Why did the Mughals emphasize their Timurid and not their Mongol descent?
2. What was the Mughal tradition of succession?
V. ANSWER IN THREE POINTS:
3. Write about the Zabt revenue system introduced by Akbar’s revenue minister, Raja Todar Mal
VI. ANSWER IN FOUR POINTS:
4. Write about the Mansabdari system introduced by Akbar.
5. How were the debates with the religious scholars important in the formation of Akbar’s ideas on governance? 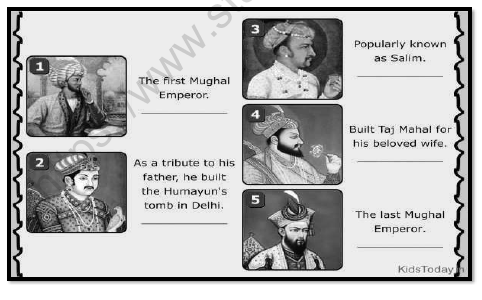