Download printable Social Science Class 7 Worksheets in pdf format, CBSE Class 7 Social Science Equality in Indian Democracy Worksheet has been prepared as per the latest syllabus and exam pattern issued by CBSE, NCERT and KVS. Also download free pdf Social Science Class 7 Assignments and practice them daily to get better marks in tests and exams for Grade 7. Free chapter wise worksheets with answers have been designed by Standard 7 teachers as per latest examination pattern

Class 7 Social Science students should refer to the following printable worksheet in Pdf for Equality in Indian Democracy in Grade 7. This test paper with questions and solutions for Standard 7 Social Science will be very useful for tests and exams and help you to score better marks

CLASS: - VII Subject-Civics
Give short answers for the following questions:-
Q1.How is political awareness an important condition for Democracy?
Ans:- Political awareness is an important condition for Democracy as politically enlightened citizens will be able to judge the performance of the government and make the correct choice of their representatives by evaluating the merits and demerits of different candidates and will not be easily swayed by false promises made by the candidates or by their money or muscle power.
Q2. Why is public opinion essential for a Democracy to work?
Ans:- Public opinion as a decision- making mechanism, plays a major role in a Democracy because a Democratic system grants people the right to formulate sound public opinion and right to express it properly. No Democratic
government can ignore public opinion. If the government ignores or suppresses public opinion, people can remove it in the next election.
Q3. What are the prerequisite for a political party in a Democracy?
Ans:- A political party should have a national outlook. It should place national interest above everything else. It should not represent any particular religion,caste or region. National integration should be the goal of all political parties.
Give long answers for the following questions.
Q1.Discuss how intolerance can destroy the Democratic system of a country.
Ans:- Intolerance has no place in Democracy. The very foundation of Democracy is based on liberty and equality which in turn is the natural outcome of tolerance. In a democratic country like India, everyone is allowed to voice his/her opinion. This spreads the culture of equality and of respecting the rights and views of others. Thus intolerance and democracy are antithetical to each other.
Q2.What do you understand by ‘Political discipline of Citizens’?
Ans:- ‘Political discipline of Citizens’ means that the citizens of a country must be politically aware and disciplined .This means that they must
1) be aware of their rights and duties
2) demand their rights and perform their duties.
3) use persuasion and not coercion to bring about change.
4) respect the view of others even if they themselves do not agree with these views.
Q3.Equality and human dignity are the core values of a Democracy. Discuss.
Ans:- Democracy is based on the principles of equality and human dignity. Everyone is treated equally and there is no discrimination of any kind. But political equality in itself is meaningless if not accompanied by social and economic equality.Caste, gender and regional divisions need to be broken down. The gap between the rich and the poor also needs to be bridged. People should treat one another with dignity. Only then can a democracy function efficiently.
TOPIC: EQUALITY IN INDIAN DEMOCRACY
Democracy is the most popular form of government in the world. Active participation by the citizens, freedom to express one’s opinion, resolving conflict through consensus and consultation, equality and justice are the main features of a democratic government. However, equality is the most important of a democratic setup. Treating everyone equally and holding the dignity of fellow citizens are core to democracy.
In a democracy, all adult citizens, regardless of their caste, religion, gender or class enjoy the right to vote. This is called Universal Adult Franchise which means that all adult citizens have the right to cast their vote and choose their representative. It is based on the principle of one person one vote & each vote has equal value. This system of government recognises the value of every citizen. Besides political equality, all democratic governments aim to achieve social as well as economic equality
for their citizens.
INEQUALITY
In-spite of the equal status granted by the Constitution, there are millions of people like Kanha and Aarti whose circumstances are far from equal. There are various forms of inequality prevalent in our society. Unequal distribution of resources is the main reason for the existence of inequality in the society. Due to lack of money, many people are deprived of even the most basic things, that is, food, clothing and shelter. People are discriminated on the grounds of class, caste, wealth, profession, gender and dis-ability. This leads to inequality and injustice. 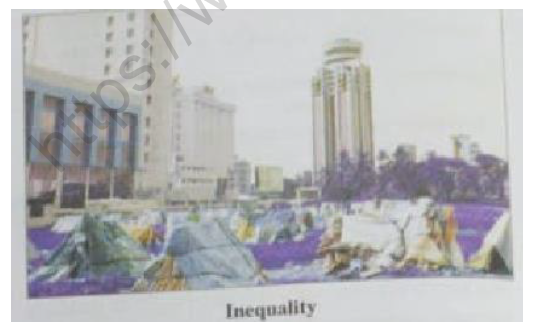 CASTE INEQUALITY
The most common form of inequality in our society is the caste-system. Caste system is classification of society based on profession and this division has been there since ages. The term Scheduled Caste is used to refer to people belonging to lower caste. This system is more predominant in the Rural areas. Many renowned personalities like B.R.Ambedkar and J.G.Phule experience discrimination on grounds of caste. Even in the 21st century, in many parts of the country, underprivileged sections of the society can-not use the wells of the upper classes, enter temples, dine with upper class people, access public places and at times are even denied medical attention and even education.
When you flip through the newspaper, you find the numerous incidents of caste-based hostilities that point towards the existence of unfair caste practices. Homes of lower class people are situatuted outside the village limit as per the dictates of the powerful upper class. As a result, they are unable to benefit from amenities such as good roads, water, electricity, health-care and education. The government schools in some villages do not permit Dalit children to sit with upper caste children. In addition, even the census officers declined to record their information. So, most of the Dalit families do not exist in government record. This leads them without access to food and other welfare
programs. Even in urban areas, people continue to practice caste system, though not in rampant and harsh ways as in rural areas.
GENDER-BASED INEQUALITY
Besides caste-based discrimination, gender-based discrimination is also wide-spread in our society. Women are paid less for the same amount in type of work done by men. Abortion, Neglect, abandonment and female infanticide are harsh realities of India as well as many other countries. The un-even sex ratio is due to dislike many people have for girl child.
EQUALITY IN INDIAN DEMOCRACY
The Indian constitution recognises that all people are equal and no individual should be discriminated on the basis of caste, religion, tribe, economic standing or education. The following provisions have been made in Indian constitution for this :
• All people are equal in the eyes of law, be it the president or any ordinary citizen, and everyone has to abide by the laws laid down in the constitution.
• The Constitution prohibits discrimination on grounds of religion, race. Caste, sex, disability or place of birth. All citizens have equal rights to use wells, tanks, bathing ghats or roads developed by the government for the public.
• Every citizen can access shops, hotels, parks and places of amusement without any restriction.
• The Constitution also forbids untouchability and it’s practice in any form.
• To promote equal service prospects, there is provision that grants Eqaulity of opportunity in matters of public employment to any office under the government.
• To include people with dis-abilities in the main stream, the government enacted a law in 1955. It ensures them Equal treatment and free education. It emphasises that all public buildings should be dis-abled/friendly. 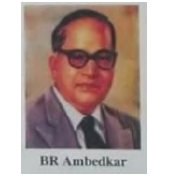 EQUALITY THROUGH WELFARE SCHEMES
The other way through which the government is trying to advance equality, as assured in the Constitution, is by promoting welfare schemes. The aim of these programmes is to provide better opportunities to all regardless of any caste, class, religious or economic differences.
One Important step for promoting equality is the midday meal scheme. Tamil Nadu was the first state to introduce this scheme in 2001.This programme has many advantages. It has led to an increase in the number of enrolments. The attendance also improved. Earlier children went home on the pretext of having food and did not come back. It is not so now. It also helped in reducing caste discrimination as persons of different castes are employed to cook these meals. Moreover, children of all castes have their meals together. It also ensures that children get a healthy diet every day.
Sarva Shiksha Abhiyan
The Sarva Shiksha Abhiyan also seeks to make education accessible to the maximum possible number of children in the age group of 6-14 years, especially girls and the depressed sections of the society.
The government is promoting many more schemes to bridge the gap between the various segments of society, but what is critical is that there is a need to respect every individual’s uniqueness and to change the mindset of the people. It is necessary that people change their outlook; only then it will be possible to end inequality in society. Establishing equality in a diverse country like ours is a constant fight, as it involves changing the way of thinking prevalent since ages. Some other important programmes and acts implemented by the government are MGNREGA, i.e., Mahatma Gandhi National Rural Employment Guarantee Act (since 2009) which aims to generate employment opportunities for the youth in villages and to help in curbing migration to urban area. Then, there is National Rural Health Mission (NHRM), which is supposed to provide better medical facilities to people in villages.