*Rule of Law. It signifies that according to established rule all laws apply equally to all citizens of the country and no one can be above the law.
*Sedition Act. An act passed by the British government to arrest without trial any person protesting or criticising the British government. In general, this act applies to any activity that is against the government in the form of resistance.
*Domestic Violence. The term refers to the injury or harm caused by an adult male. Usually the husband, to his wife.
*Repressive. A law which is based on force or pressure and against the will of people. This act prevents the free and natural development of a person.
*Evolution. The term implies process of development from a simple to a complex form. It indicates the development of any act, species of plants or animals and any charter.

(i) The 'Rule of Law' means
* A system in which all public affairs are conducted according to law.
*Under this system it is ensured that all citizens obey the law. Nobody is considered above law.
* Rule of Law implies that nobody can be punished unless he/she has violated a particular law. All are treated equal before law.

(ii) An example of a violation of a Rule of Law is :
The defence minister helps his nephew go into hiding because his nephew has been given six years imprisonment by the High Court for a crime which he has committed. This is a clear case of the violation of Rule of Law.

INTRODUCTION OF BILL IN PARLIAMENT.
Finally after a long journey the bill is introduced in Parliament for passage. In Parliament the bill passes through three stages before becoming an act or law. These are:

* First stage: In its first stage only the name and the purpose of the bill is given and its copies are circulated among the members of the House. If the House approves its introduction, it is published in the Government Gazette.

*Second stage : To follow up, the bill is discussed clause by clause and certain changes are made with the approval of the House. Sometimes the bill is referred to the select committee or circulated to elicit public opinion as in the case of Domestic Violence Act 2005. The Women's Bill was sent to the Parliamentary Standing Committee.

Third stage: In the third and last stage, the bill is put to vote. Discussion is allowed and only verbal amendments are moved. If passed by a simple majority, it is sent to the other house, where the same proceedure is followed. And, if the Bill is passed by both the Houses, it is sent to the President for approval. After his assent the Bill becomes a law. The same procedure was followed for passing the "Protection of Women from Domestic Violence" bill which
came into effect in 2006.

*The Parliament plays an important role in making laws. There are several stages through which this takes place and it is often different groups in society that raise the need for a particular law. To explain the stages we can take the example of the Protection of Women from Domestic violence Act 2005

Filing up of a petition
* After filing of a petition, the need for a new law is raised in different forums like the women's issues were raised throughout the 1990s.
Drafting the bill
*After nationwide consultations a group of lawyers takes the lead in drafting the bill as in the case of Women's
Protection Bill.
Discussion on bill in different organisations
*In the next step, meetings are held with different organisations to discuss the bill. 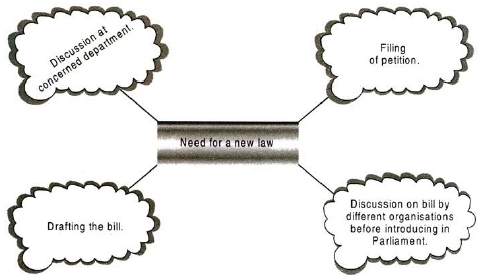