CBSE Class 8 Social Science Land Soil Water Natural Vegatation and Wild life Notes Learning the important concepts is very important for every student to get better marks in examinations. The concepts should be clear which will help in faster learning. The attached concepts made as per NCERT and CBSE pattern will help the student to understand the chapter and score better marks in the examinations.

LAND RESOURCES
Land is an important component of natural resources. It is not evenly distributed all around the world. Differences are fuuudiu in its use and levels of development, all around the world, depending upon the factors like-relief, climate’and population distribution, etc. Their misuse can endanger survival of humanity.

1. Physical Features : Relief features like mountains, plateaus, river, slope of the land etc., influence forest cover, human habitation and hence put a limit on land use.
2. Types of Rocks : Types of rocks like sedimentary, igneous and metamorphic rocks, affect availability of minerals and soils, etc., in an area. Soils are also made from weathering or breakdown of rocks. Therefore, rocks influence the type and degree of land use.
3. Slope : Humans have,generally preferred gentle slopes for habitation as well as agriculture. Steep slopes are not favourable for agriculture or construction of houses as such. Further, on steep slopes soil erosion occurs rapidly.
4. Ciamate : Climate is an important factor determining land use. It affects crop growth, habitation by animals and humans. Cold areas of Tundra region, or extremely hot and and climates of deserts are unsuitable for human habitation.
5. Human Needs : Human needs like construction of roads, railways, ,communication lines, land cultivation, overcoming climate barriers, economic well-being and technology also determine land use. People inhabit in less numbers in the snow bourrcvarea! of Siberia,’or deep inside the deserts, like Sahara.
6. Private vs. Community : Land can also be divided on the basis of Private land an ommunity land. Private land is owned by individuals whereas, community land is owned by the community. Tor common uses like collection of fodder, fruits, nuts, etc. It is also called common group resource. 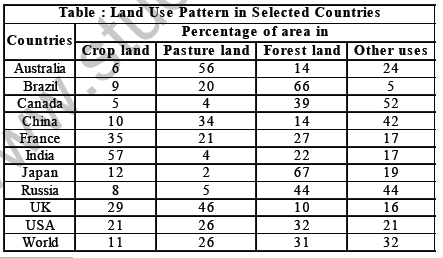 Land degradation takes place due to the following reasons:
1. Change in Landforms: Man has the ability to ground high hills or fill up deep depressions. Dams across rivers, mining and construction of houses, bridges and roads affect landforms directly.

3. Degradation by Mining and Quarrying: More than 5,500 mines and quarries are operating in India.
The dumping of mineral wastes and abandoned mines are degrading and defacing the land.

4. Degradation by industrial vaste : Indiscriminate discharge of effluents has led to land degradation
and making the land unfit for cultivation.

HOW CAN WE CONSERVE DEGRADED LAND
The following steps can go a long way in the conservation and reclamation of land :
1. Afforestation and control on overgrazing.
2. Plantation of shelter belts of plants.
3. Growing of thorny bushes to stabilise the sand dunes.
4. Proper discharge and disposal of industrial effluents and wastes.
5. Environmental friendly mining.

SOIL
Soil is the base of terrestrial Iife supporting system. It is a fragile resource which can easily be damaged or destroyed by human activity. It must be conserved and treaeed with care.

DEFINITION OF SOIL
According to Geologists, soil is 'the mixture of disintegrated rock material comprising mineral product together with decayed organic material. and living organisms'.

1. Weathering : Weathering is the bracking up of rocks and the agents of gradation carry this load over the large areas of the land. The colour, structure, mineral content in soil is formed due to it.
2. Climate : Without climate, weathering cannot take place. Climate has different effects on different types of rocks. Through temperature and precipitation, it affects rate of weathering, decomposition of organic material as well as the type and kind of vegetation in the area. Climate can be regarded as the most
dominant factor in soil formation.
3. Biota or Biomass : The decomposition of organic matter gives humus and bacteria to do the activity of mixing and shifting of soil materials. The decayed matter also increases chemical action and lends colour and texture to soil.
4. Topography : It includes relief, slope as well as the direction with respect to sunshine and winds. Gentle slopes favour soil formation, while steep slopes lead to soil erosion.

Soil Erosion
Removal of soil by running water, winds and glaciers is called soil erosion. soil erosion is of various types:
1. Sheet Erosion : When a sheet or layer of soil is removed over a large area by running water, it is called sheet erosion.
2. Rill Erosion : If rills appear, they increase in number over a period of time. It is called rill erosion.
3. Gully Erosion : If the water flows regularly along a definite path down the slope, it cuts a channel called gully and this type of erosion is called gully erosion. The land degraded by gully erosion is called badland or ravine.

Download Class 8 Social Science assignments. Practice tests for Class 8 for Social Science has been made for all important topics in NCERT book and...
More..

Download Class 8 Social Science assignments. Practice tests for Class 8 for Social Science has been made for all important topics in NCERT book and...
More..