Class 8 Social Science students should refer to the following concepts and notes for Minerals And Energy Resources in standard 8. These exam notes for Grade 8 Social Science will be very useful for upcoming class tests and examinations and help you to score good marks

CBSE Class 8 Social Science Minerals and Energy Resources Notes Learning the important concepts is very important for every student to get better marks in examinations. The concepts should be clear which will help in faster learning. The attached concepts made as per NCERT and CBSE pattern will help the student to understand the chapter and score better marks in the examinations. 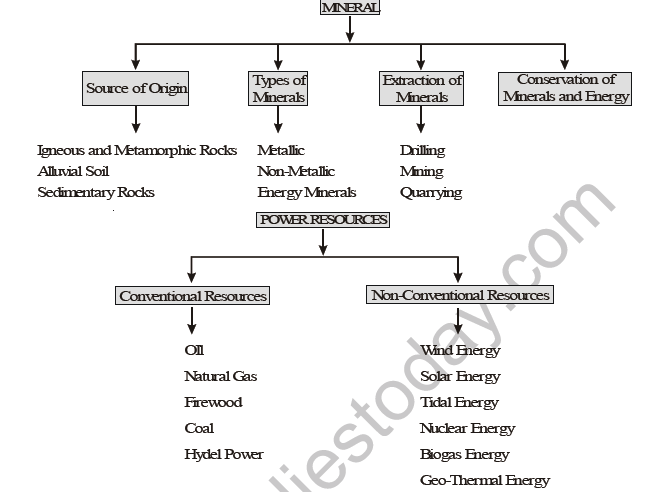 • Minerals Natural inorganic substances, which consist of one or more elements.

• Ductility : It is the ability of a metal to be drawn into thin wire without breaking.

• Smelting : The process of separating of metals from their ores by the use of heat.

• Quarrying : Mining of ores from the surface of the land.

• Shaft Mining : Mining of ores at great depths below the ground.

• Mineral Fuels (fossil) : Non-metallic minerals used as power resources or fuel such as coal and petroleum.

• Drilling : The process of digging wells and extracting mineral oil.

• Grid : Transmission of electricity through network of power lines.

• Reservoir Rocks : The rocks that contain large deposits of oil and gas.

• Rock : Exposed hard substance of the lithosphere is known as the rock. It consists of one or more minerals but with no definite mineral composition.

Metals have the characteristics of shine and lustre.

• Non-Metallic Minerals : Non-metallic minerals do not contain metals and are bad conductors of heat and electricity. Non-metals lack shine and lustre.

• Conventional Sources : Conventional sources of energy are those sources which have been in use for quite sometime and got exhausted. For example–coal, petroleum, natural gas, etc.

• Black Gold : Petroleum and its derivatives are called Black Gold.

• Biogas : It is a fuel for cooking and lighting obtained from organic waste of dead plants and animal material.

* Salt and graphite are also treated as minerals.

* All rock minerals are rocks but all rocks are not minerals.

*Sometimes rock looks blue because its contains copper minerals. There is no well known minerals in Switzerland.

*The rarest available diamond is the green diamond.

*Petroleum is the combination of two Latin words

*The first country to develop hydroelectricity was Norway.

* Scotland is the site of the first world’s solar and wind powered bus shelter.

Mineral : A naturally occuring substance that has a definite chemical compocition is called Mineral.

• Mineral are not evenly distributed

• Some minerals are formed in area which are not earily accessible such that the Artic Ocean bed and Antarctica.

• Mineral can be identified on its basis of their physical properties such as colour, density, hardness, and chemical properly. 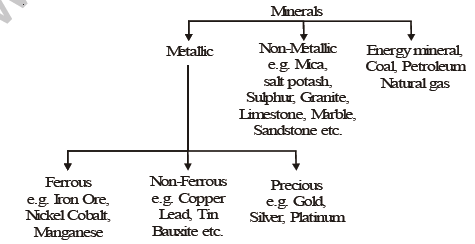 • Metallic Minerals : We get metals from these minerals metallic minerals further be divided into ferrous and non-ferrous.

1. Mining : The process of taking out minerals from rocks buried under the earth surface is called mining.

2. Drilling : The process of digging wells and extracting mineral oil is known as 'drilling'. In this deep wells are dug for extracting oil and natural gas.

3. Quarrying : It is the process used to extract mineral that lie near the surface. In this an open pit is dug. Such an open pit mine is called a 'quarry'.

(i) Iron ore is the basic minerals.

(iii) Magnetite : This is the best quality of iron ore and contains about 72% iron. It has excellent magnetic qualities, especially valuable in the electrical industry.

(iv) Hematite : It is most important industrial iron ore in terms of quantity used. It contains 60% to 70% of pure Iron.

(v) The major iron ore belts in India are :

• Uses : (i) It is mainly used in the manufacturing of steel and ferro-mangnese alloy.

(ii) It is also used in manufacturing bleaching powder, insecticides and paints.

(iii) It increases the strength of steel.

(iv) It is also used for making glass and chemical.

(i) India is one of the leading producer of Manganese.

(ii) Manganese of India is of high quality and is in great demand.

(iii) Japan is the leading importer of India's Manganese.

(i) The physical properties of copper make it valuable to industry.

(ii) Being malleable, ductile and a good conductor, It is mainly used in electrical cables, electronics and chemical industry.

(iii) India is critically deficient in the reserve and production of Copper.

(i) It is useful in cooking utensils, radiation and refrigerators.

(ii) It is used in ranging from rain gauges to electronic system for rockets.

Bauxite is the main ore of aluminium. Bauxite deposits are formed by the decomposition of rock rich in aluminium silicates.

(i) It is a good conductor of heat and electricity.

(ii) It is used to make cans for various beverages.

(iii) It can be pressed into a thin foil.

(iv) Because it is light and strong, it is used in space craft.

(v) The bodies and parts of some automobilies are made from aluminium alloy.

India is the largest producer of bauxite in South Asia.

It is a non metallic mineral. India is the largest producer of mica and it produces more than 60% word's mica.

• Main Properties and Uses of Mica :

(i) It is made up of a series of plates or leaves.

(ii) It can be converted into thin sheets.

(iii) It can be black, green, red yellow or brown.

(v) It is indispensable minerals used in electric and electronic industries.

(i) It is associated with rocks composed of either calcium carbonate of magnesium, or mixture of these two.

(ii) It is found in sedimentary rocks.

(iii) It is used for variety of purposes.

(iv) It is a basic input in cement Industry.

(v) It is also used by chemical, iron and steel industry.

Minerals are considered back bone of of an economy. Most of the mineral are non-renewable. So there is urger need to conserve them.

• Measures to conserve the minerals :

(i) Minerals should be used in a planned and judicious way.

(ii) Wastage of minerals should be minimised.

(iii) Modern technology should be used for the exploitation of minerals.

(iv) Export of minerals should be minimised.

(v) We should think about the use of substitutes in order to save minerals.

(vi) We should encourage recycling of metals.

• Conventionial Resource : Conventional power resources are those which are exhautible.

(i) Once they have been used up, they cannot be replaced e.g. coal, petrolem

(ii) They are very costly and causes pollution.