Question : Reaction of water with aluminium carbide gives a colourles. gas. The gas is:
a. Methane
b. Acetylene
c. Ethane
d. Propane
Answer : A

Question : This is not true regarding the micelle.
a. The micelle stay in solution as a colloid
b. Micelle will not come together to precipitate
c. There is ion-ion repulsion
d. The dirt suspended in the micelles is very difficult to get rinsed oil
Answer : D

Question : This is not a characteristic of members of a homologous series.
a. They possess varying chemical properties
b. Their properties vary in regular and predictable manner
c. Their formulae fit the general molecular formula
d. Adjacent members differ by one carbon and two hydrogen atoms
Answer : A

Question : A gas on passing through ammonical AgNO3 does not give any precipitate but decolourises alkaline KMnO4 The gas may be :
a. C2H6
b. C2H4
c. C2H2
d. C3H8
Answer : C

Question : Ethanol is made unfit for drinking by adding
a. Propanol
b. Methanal
c. Methanol
d. Ethanal
Answer : C

Question : The general formula CnH2nO2 could be for open chain
a. diketones
b. carboxylic acids
c. diols
d. dialdehydes.
Answer : B

Question : Match the following with the correct response:

a. 1-D, 2-A, 3-C, 4-B
b. 1-C, 2-B, 3-D, 4-A
c. 1-B, 2-D, 3-A, 4-C
d. 1-A, 2-C, 3-B, 4-D
Answer : A
Explanation: NaCl has ionic bonds between the sodium ion and the chlorine ion. Ammonia has polar covalent bonds between nitrogen atom and hydrogen atoms. Nitrogen molecule has non-polar covalent bonds between the two nitrogen atoms since the two atoms are alike. C60 is a member of fullerenes (Allotropes of carbon). Buckminsterfullerene contains a cluster of 60 carbon atoms joined together to form spherical molecules.
Question : Diamond is not a good conductor of electricity because:
a. It is not soluble in water.
b. It is very hard.
c. It has no free electrons to conduct electric current.
d. Its structure is very compact.
Answer : C
Explanation: Diamond is not a good conductor of electricity because it has no free electrons in its structure (like graphite) to conduct electric current.
Question : Substance ‘X’ is formed by the reaction of carboxylic acid and alcohol. It is used in making ice creams, cold drinks, perfumes and in flavoring agent. Name ‘X’.
a. Aldehyde
b. Alkyne
c. Ester
d. Ketone
Answer : C
Explanation: Substance X is an ester. The reaction in which a carboxylic acid combines with an alcohol to form an ester is called esterification. Some volatile esters with characteristic odours are used in synthetic flavours, perfumes, and cosmetics. Certain volatile esters are used as solvents for lacquers, paints, and varnishes; large quantities of ethyl acetate and butyl acetate are commercially produced for this purpose.

Question : Give names of the following:
(a) An aldehyde derived from ethane
(b) Ketone derived from butane
(c) Compound obtained by the oxidation of ethanol by chromic anhydride
Answer :

Question : An organic compound A is widely used as a preservative in pickles and has a molecular formula C2H4O2. This compound reacts with ethanol to form a sweet smelling compound B.
i. Identify the compound A.
ii. Write the chemical equation for its reaction with ethanol to form compound B.
iii. How can we get compound A form B?
iv. Name the process and write corresponding chemical equuation.
v. Which gas is produced when compound A reacts with washing soda? Write the chemical equation.
Answer :
i. A is ethanoic acid (CH3COOH). Commonly, known as acetic acid. Its 5 % solution in water is used to prepare vinegar, which is used as preservatives for pickles.

Question : What is a functional group? Give examples of four different functional groups.
Answer : Functional group: An atom/group of atoms joined in a specific manner which is responsible for the characteristic chemical properties of the organic compounds. Examples are hydroxyl group
(– OH), aldehyde group (– CHO), ketonic group (C=O ), carboxylic acid group (–COOH), etc.

(b) What will you observe on adding a 5% alkaline potassium permanganate solution drop by drop to some warm ethanol taken in a test tube? Write the name of the compound formed during the above chemical reaction.
Answer : (a) Functional group : The functional group in an organic compound is an atom or a group of atoms bonded together in such a unique fashion, that it is usually the site of chemical reactivity of an organic molecule.

Question : What is ethanol? Draw the structure of ethanol molecule. How does ethanol behave with the following:
(a) Sodium
(b) Excess of concentrated sulphuric acid at 443 K?
Write chemical equation for each reaction.
Answer : Ethanol is the second member of the homologous series of alcohols. 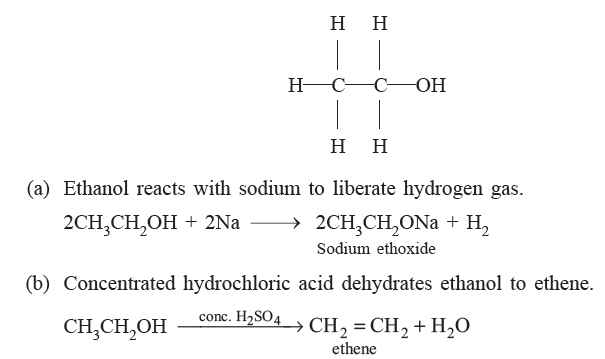 Question : An organic compound ‘A’ is an essential constituent of wine and beer. Oxidation of ‘A’ yields an organic acid ‘B’ which is present in vinegar. Name the compounds ‘A’ and ‘B’ and write their structural formula. What happens when ‘A’ and ‘B’ react in the presence of an acid catalyst?
Write the chemical equation for the reaction.
Answer : ethyl alcohol is an essential constituent of wine and beer. Therefore, A is ethyl alcohol. Oxidation of ethyl alcohol gives acetic acid. Vinegar contains acetic acid. Therefore, B is acetic acid. 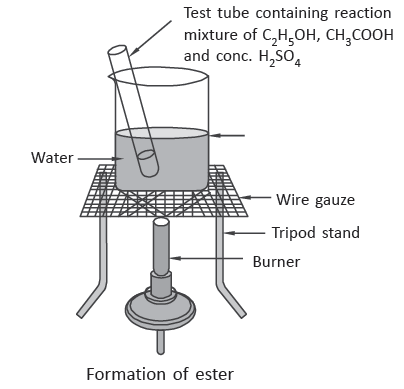 Question : An ester has the molecular formula C4H8O2.Write its structural formula. What happens when this ester is heated in the presence of sodium hydroxide solution? Write balanced chemical equation for the reaction and name the products. What is a saponification reaction?
Answer :

The reaction between an ester and an alkali to form the sodium salt of an alkanoic acid and an alcohol is known as saponification.

Question : Give reasons for the following observation:
The element carbon forms a very large number of compounds.
Answer :
(i) Carbon has the unique ability to form bonds with other carbon atoms, so as to form long straight chains, branched chains and closed rings, giving rise to a large number of molecules.
(ii) Carbon atom has four valence electrons, therefore, it can bind itself with four more carbon atoms with single covalent bonds, or with different atoms of monovalent elements.
OR
A compound C (molecular formula, C2 H4 O2) reacts with Na-metal to form a compound R and evolves a gas which burns with a pop sound. Compound C on treatment with an alcohol A in the presence of an acid forms a sweet smelling compound S (molecular formula, C3H6O2). On addition of NaOH to C, it also gives R and water. S on treatment with NaOH solution gives back R and A.