Read and download free pdf of CBSE Class 10 Biology Life Processes Worksheet Set B. Students and teachers of Class 10 Biology can get free printable Worksheets for Class 10 Biology in PDF format prepared as per the latest syllabus and examination pattern in your schools. Standard 10 students should practice questions and answers given here for Biology in Grade 10 which will help them to improve your knowledge of all important chapters and its topics. Students should also download free pdf of Class 10 Biology Worksheets prepared by school teachers as per the latest NCERT, CBSE, KVS books and syllabus issued this academic year and solve important problems provided here with solutions on daily basis to get more score in school exams and tests

Class 10 Biology students should refer to the following printable worksheet in Pdf for Life Processes in standard 10. This test paper with questions and answers for Grade 10 Biology will be very useful for exams and help you to score good marks

1. Name the process required for the maintenance of life.

2. What is the function of stomata and how do they perform this function?

3. Which element is essential for the synthesis of proteins in plants?

4. How do the plants fulfill the requirement of nitrogen to make proteins?

5. Describe the nutrition process in Amoeba.

6. Name the enzyme present is saliva.

7. What are the secretions of gastric glands?

8. Name the muscle which regulate the exit of food from stomach?

10. What causes the formation of cramps in our muscles?

11. Why does the rate of breathing in aquatic organisms is much faster than the terrestrial organism?

13. Why does the ventricles have thick walls than atria?

14. Name the group of animals that have 3 chambered and 2 chambered heart?

Question. With the help of a labelled diagram of human excretory system, Mention its important part and explain them.
Ans. 1) Kidney – It is the functional unit of excretory system. Each kidney is made up of about million microscopic coiled channels called nephrons. Nephrons are the basic filtration unit in the kidneys. It consists of – Glomerulus’s, Bowman’s capsule, convoluted tubule.
2) Ureter – Wastes comes out of the kidney into the ureter.
3) Urinary bladder – Ureter pours its contents into a muscular sac called the urinary bladder.
4) Urethra – Urine flows from bladder to the outside through the urethra.
Question. Saliva contains an enzyme called:
(a)Trypsin
(b) Ptyalin
(c) Amylase
(d) Pepsin
Ans. Correct option(c)
Question. (i) Draw a well labeled diagram of human digestive system
(ii) Describe the role of following in digestion.
a) Bile
b) Salivary amylase
c) HCl
Ans. (i)
a) Bile – emulsiflcation of fats
b) Salivary amylase – digest starch in mouth
c) HCl – Activate pepsinogen by making medium acidic in stomata.
Question. Draw the diagram of alimentary canal of man and label it.
Ans. 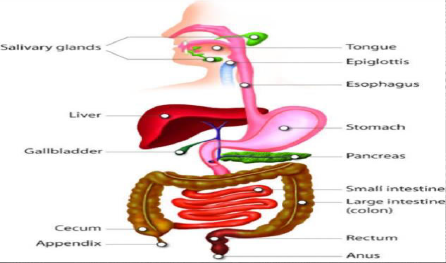 Question. With the help of labeled diagram, Discuss the mechanism of respiration in human beings.
Ans. Mechanism of Respiration – It occurs in following steps
a) Breathing – Taking in oxygen and expelling carbon – dioxide out is called breathing. It involves following steps –
(i) Inhalation – It is taking in oxygen. It occurs due to contraction of muscles attached to ribs. This lifts ribs and flatter diaphragm, which increase the volume of thoracic cavity. Hence the pressure inside the thoracic cavity decreases and air rushes inside of the lungs.
(ii) Exhalation – It is expelling of carbon – dioxide. It occurs due to relaxation of muscles attached to ribs and diaphragm is done shaped. This decreases the volume of thoracic cavity and decreases air pressure and expels out of the lung.
b) Exchange of gases – It takes place between the alveoli of lungs and surrounding blood capillaries.
c) Transport of gases in blood – Hemoglobin present in the blood transport. in blood. Oxygen is transport from the lungs to the body cells in the form of any hemoglobin.
d) Oxidation of food – Break down of glucose molecules which produce energy. It occurs is into chondria.
Question. Blood from superior vena cava flows into------------
(a)Right atrium
(b) Right ventricle
(c) Left atrium
(d) Left ventricle
Ans. Correct option(a)
Question. Describe an experiment to prove that carbon – dioxide is essential for the process of photosynthesis.
Ans. Experiment showing is essential for photosynthesis.
1) Take a potted plant with elongated leaves
2) Take an empty bottle and put a little amount of potassium hydroxide (KOH) in it.
3) Now cut the cork of the bottle into two parts and place it on one of the leaves of the potted plant in between the two parts of the cork.
4) Now put the bottle in the presence of sunlight 72 – 96 hours.
5) Now test the leaf for the presence of starch.
Question. Write three types of blood vessels. Give one important feature of each.
Ans.(i)Arteries-No valves, thick walled, carry oxygenated blood away from heart.
(ii)Veins-Presence of valves, thin walled, carry deoxygenated blood towards heart.
(iii)Capillaries-Very fine blood vessels, found in tissues, site for material exchange
Question. Describe the structure and functioning of nephron.
Ans. Each nephron is a cluster of very thin-walled blood capillaries. Each capillary cluster in the kidney called glomerulus is associated with the cup shaped Bowman’s capsule that collects the filtered urine.
Nephron filters the blood in order to remove nitrogenous waste. They also absorb some useful substance such as glucose, amino acids, minerals and major amount of water from filtrate.
Question. How does aerobic respiration differs from anaerobic respiration?
Ans.

Question. Describe double circulation in human beings. Why is it necessary?
Ans. In mammals and birds the blood goes through the heart twice during each cycle. This is known as double circulation.
Deoxygenated blood which enters right auricle and then it enters the right ventricle from where it is pumped to lungs for oxygenation. From lungs after oxygenation it comes to left auricle and then enters left ventricle from where it is pumped to various parts of body.
Such system of circulation does not allow mixing of oxygenated and deoxygenated blood which allows efficient supply of oxygen to the body.
Question. Out of a goat and tiger, which one will have a longer small intestine? Justify your answer.
Ans. Goat because herbivores eating grass needs a longer small intestine to allow the cellulose to be digested.
Class 10 Science Life Process Notes and Questions

Question: How is small intestine deigned to absorb digested
Ans. The inner lining of small intestine has numerous finger-like projections called villi which increase the surface area for absorption. The villi are richly supplied with blood vessels which transport the absorbed food to each and every cells of the body. Where, it is utilized to obtaining energy and repair of old tissues.

Question: How are lungs designed in human beings to maximize the area of exchange of gases
Ans. Lungs have some adaptations in them so that eficient exchanges of gases take place. The adaptations are –
a) Increased surface area
b) Very fine and delicate surface for easy exchange of oxygen and carbon dioxide
c) Mechanism for moving the air in and out of respiratory surface where the oxygen is absorbed

Question: Dark reaction of photosynthesis does not need light. Do plants undergo dark reaction at night explain.
Ans. Dark reaction does not mean that it occurs in the absence of light i.e., at night. Infact these reactions do not depend on light energy and occur simultaneously with light reaction.

Question: What are the functions of lymph in our body?
Ans. Functions of lymph area)
It returns tissue fluid from interstitial space into the blood.
b) It collects carbon dioxide, waste products and metabolites from tissues via tissue fluid.
c) Lymph has lymphocytes (WBC’S), the lymph provides in immunity to the body and fight against the invading organisms.

Question: With the help of labelled diagram, discuss the structure of cross – section of leaf.
Ans. Leaf has two parts:
(i) Epidermis – Outermost layer of cell is called epidermis. Lower epidermis has small pores in between cells called stomata.
(ii) Mesophyll – Parenchymatons cells containing chloroplast is called mesophyll. It is two types – palisade and spongy parenchyma.

Question: How is haemoglobin associated with respiration explained?
Ans. Transportation of oxygen and carbon – dioxide occurs with the help of respiratory pigment haemoglobin. Haemoglobin is a red pigment having very high affinity for oxygen. Oxygen is transported from the lungs to the body cells in the form of oxyhemoglobin. Carbon – dioxide is transported from the body cells to the lungs in the form of carbamino – haemoglobin

Question: What is “translocation”? Why it is essential for plants.
Ans. Transportation of organic solutes in the plants is called translocation. It is necessary, because all the cells need food to carry out their vital functions. It occurs in upward as well as downward direction or to the storage organs of roots, fruits, seeds and to growing organs.

Question: What are the modes of excretion in plants?
Ans. Modes of excretion in plants are –
a) The plants get rid of excess water by transpiration.
b) The only major gases excretory product of plants in oxygen. It is released from plants into the environment by diffusion.
c) Organic wastes of plants are stored within dead permanent tissues such as wood or within leaves or bark which are periodically removed.
d) The plants also excrete some wastes substances into the soil around them.
e) Many wastes products of plants are stored in cellular vacuoles.

Question: While eating you are advised not to talk Why are you advised so?
Ans. We are advised so because while eating some food particles might enter the wind pipe which can lead to choking.

Question: In the process of Photosynthesis food A is prepared which gets converted into food B. What are A and B? Why is A converted to B?
Ans. Food A is glucose and food B is Starch.
A is converted to B as B is insoluble form of carbohydrate. It is more compact and hence, suitable for storage.

Question: What is the function of digestive enzymes?
Ans. Enzymes break-down the various complex components of food into simple and soluble components so that they can be absorbed easily.

Question: Due to availability of less water, how does the plant cope up with lack of water in desert conditions?
Ans. They open their stomata at night and stomata remain closed during day time, to conserve moisture.