Read and download free pdf of CBSE Class 10 Biology Control And Coordination Worksheet Set A. Students and teachers of Class 10 Biology can get free printable Worksheets for Class 10 Biology in PDF format prepared as per the latest syllabus and examination pattern in your schools. Standard 10 students should practice questions and answers given here for Biology in Grade 10 which will help them to improve your knowledge of all important chapters and its topics. Students should also download free pdf of Class 10 Biology Worksheets prepared by school teachers as per the latest NCERT, CBSE, KVS books and syllabus issued this academic year and solve important problems provided here with solutions on daily basis to get more score in school exams and tests

Class 10 Biology students should refer to the following printable worksheet in Pdf for Control And Coordination in standard 10. This test paper with questions and answers for Grade 10 Biology will be very useful for exams and help you to score good marks 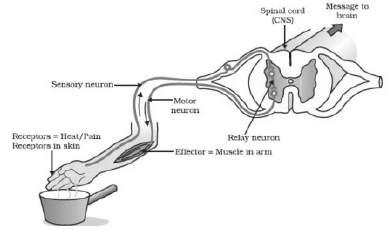 Question : How does the removal of waste products take place in single celled organisms?

Question : Draw a diagram for human excretory system and label

Question : Draw a diagram for nephron and label

Question : Name the blood vessel entering the kidney and the one leaving it.What is the difference in the composition of blood in these 2 vessels(write 2 differences)