Key Concepts of the lesson:

· Mahatma Gandhi and the idea of Satyagraha – The power of Truth & the need to search for truth –Mental strength is more powerful than physical force to win the heart of the oppressor. Novel idea of Satyagraha was first time implemented in South Africa.

· In India the first was at Champaran in 1916– to inspire plantation workers to struggle against oppressive plantation system. In 1917 Satyagraha at Kheda -to support peasants

· In 1918 Satyagraha at Ahmedabad-Among the cotton mill workers.

· The First World War - its effects

· Huge increases in defenses expenditure. Custom duties were raised, Income tax was introduced. There was forced recruitments in rural areas, spread of epidemics

· The Rowlett Act of 1919: It gave the British government enormous power to repress political activities and allowed detention of political prisoners without trial for two years.

· Non-cooperation programmer was adopted at Nagpur in Dec.1920.

· The peasant movement in Awadh demanded reduction of revenue, abolition of beggar-Bab Ramachandra.

· Inland Emigration Act of 1859: Under this act plantation workers were not permitted to leave the tea gardens without permission.

· Swaraj Party was founded by C.R.Das and Moti Lal Nehru for return to council Politics.

· Lahore Congress session and demand for Purna Swaraj in 1929.

· Dandi march and the beginning of civil Disobedience movement

· Salt was something consumed by the rich and the poor alike, and it was one of the most essential items of food- salt considered a more effective weapon for protest against Britishers.

· Who participated in the movement?

· The rich peasant communities, the poor peasantry, business class, the industrial workers in Nagpur and a large scale participation of women took active part in the movement.

· Limits of the movement-less participation by untouchables – Ambedker for separate electorate and Poona pact of 1932, luke warm response by some Muslim Political Organization

· Provisions of Poona pact of 1932 – Signed between Dr.Ambedkar & Gandhi ji- It gave depressed classes reserved seats in central provincial councils but they were to be voted by the general electorate. 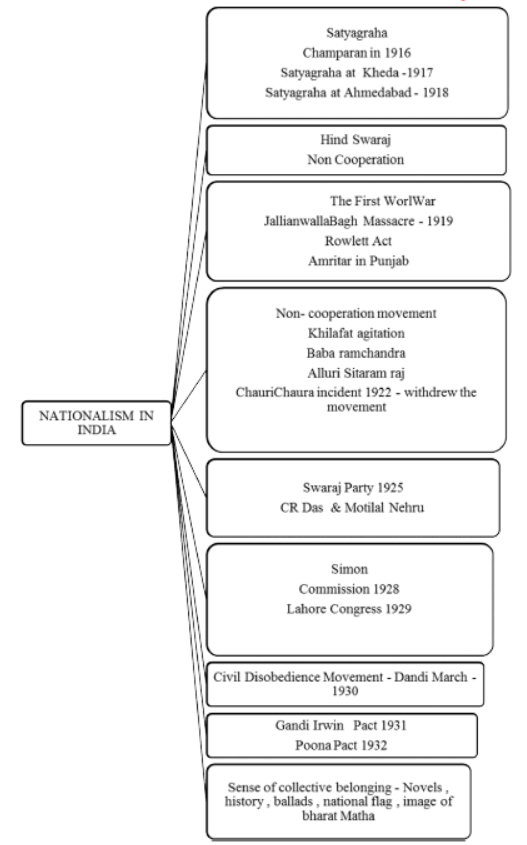 1. Why Non-Cooperation? What was the method used in the Movement?
• Gandhi in his famous book Hind Swaraj, declared that the British continue to rule with the Cooperation of the Indians – If we withdraw our Co-operation then their rule would end. It began with surrender of titles, boycott of civil services, army, police, courts and legislative councils, schools and foreign goods - Swadeshi, Boycott & National education.

2. Why did non-cooperation movement slowdown in cities?
• Khadi cloth was more expensive for the poor-No alternative Indian Institution to accommodate Indians. Students and teachers began going back to Govt. Schools and lawyer joined courts.

3. When did Simon commission come to India? Why was it boycotted?
• Simon reached Indian in 1928. It was boycott because- It did not have any single Indian- It did not talk about Swaraj

4. Who were the leaders of Khilafat Movement? Why was it started?
• Ali brothers - Muhammad Ali and Shaukat Ali. The defeat of Ottoman Turkey in 1st world war-Harsh peace treaty was going to be imposed on Ottoman emperor-To defend this, a Khilafat Committee was formed –to undo the wrong done to Turkey-Joined with non-cooperation movement

5. What were the conditions of the Gandhi Irwin pact?
• Mahatma Gandhi signed the pact with Lord Irwin on 5th March, 1931- Gandhi agreed to participate in the 2nd Round table conference in England-Government agreed to release all the political prisoners.

6. What were the decisions of the Lahore Congress session of 1929?
• In December 1929 under the presidency of Jawaharlal Nehru the Lahore Congress formalized the demand of ‘Purna Swaraj’ or complete independence.It was declared that 26th January 1930 would be celebrated as the Independence day when people were to take a pledge to struggle for independence-Decided to launch Civil Disobedience movement.

7. How did the First World War help in the growth of nationalist movement in India?
• War created a new political and economic situation. It led to an increase in expenditure. The war led to a price rise and hardship for common people. War led to forced recruitment of people. Acute Shortage of food led to famine and misery. Indians began to realize that they were drawn in a war unnecessarily. This feeling united Indians against the British.

1. “This sense of collective belonging came partly through the experience of united struggles role of folklore, songs, icons &images”Analyse the statement.
• In late 19th century, Indian Nationalist began recording folk tales sung by bards and toured village to gather. The tales they believed gave true picture of traditional culture that was damaged by outside forces. It was essential to preserve this folk tradition in order to discover the National Identity. It restored a sense of pride in one’s past
• During Swadeshi Movement, a tricolor flag was designed representing eight provinces through eight lotuses and a crescent moon symbolizing Hindu-Muslim unity. Later Gandhiji developed tricolor flag (Red, Green and White) with a spinning wheel at center representing self-help. Carrying the flag became a symbol of defiance.
• This image Bharath Mata was first created by Bankim Chandra Chttopadhyay. In 1870 he wrote Vande Mataram a hymn to the mother land. Abanindranath Tagore in his painting portrayed Bharath Mata as calm, ascetic figure, composed, divine and spiritual

2. Describe the Dandi March of Gandhiji.
• Mahatma Gandhi found in salt a powerful symbol that could unite the Nation. He sent letter to Viceroy Irwin in which the most stirring was demand to abolish salt tax. When Irwin refused, Gandhi started the salt march accompanied by 78 of his trusted volunteers, marched 240 miles from Sabarmati ashram to Dandi. On his way he told the importance of Swaraj to people and asked to defy British. On 6th April he reached Dandi violated the law, manufacturing salt by boiling sea water. It marked the beginning of civil disobedience movement.

3. Who was Alluri Sitaram Raju? Explain his role in inspiring the rebels with Gandhijis ideas?
• Alluri Sitaram Raju was a tribal leader in the Gudem hills of Andhra Pradesh. He started a militant Guerilla Movement in the early 1920s. The tribal people were enraged by the British policy, but when the government began forcing them to contribute ‘beggar for road building, the hill people revolted. Raju inspired the hill people. He talked on the greatness of Mahatma Gandhi. Inspired by Gandhijis Non Cooperation Movement he persuaded people to wear Khadi and give up drinking. But at the same time he did not believe in Non Violence, he thought that India could be liberated only by the use of force.

Please click the link below to download pdf file for CBSE Class 10 Social Science Nationalism In India Notes Set A.