Ans:  Sectors are the groups of various economis activities that are involved in the production of goods and services.

Que.No.2:   Which type of activity comes under the primary sector?

Que.No.3:   In which sector seasonal and disguised unemployement is most prevelent?

Ans:  In primary sector specially in agriculture seasonal and disguised unemployement is most prevelent.

Que.No.4:   Which types of activities do the secondary sector covers?

Ans:   Secondary sector covers activities of manufacturing & industries in which producer is involved in changing the natural products in a very useful product.

Que.No.5:   How is tertiary sector different from the primary and secondary sector?

Ans:    Tertiary Sector is quite different from primary and secondary sector because in tertiary sector people are involve in the production of services instead of goods.

Ans:  GDP is the Gross Domestic Product- It is the sum of total Production in the three sectors of a country in a year.

Que.No.7  Which sector is the largest employer in India?

Ans: The primary sector is the largest employer in India.

Ans:  When there are more than required persons are involved in production due to lack of jobs it is termed as Disguised umemployement. If we remove a few person from this the production will not be affected.

Ans:  National Rural Employement Guarentee Act 2005. This is the act made in the year 2005 to ensure 100 days guarenteed employement in rural area.

Ans:  The organised sector is the sector where workers are employed on permanent basis, their terms of employement are regular, people have assured work, their working hours, saleries benefits and terms & condition of services are clearly specified.They are governed by the rules and regulations made by the government.

Que.No.1: Do you think the classification of economic activities into primary, secondary and tertiary is useful? Explain how.

Answer:  The classification of economic activities into primary, tertiary and secondary is useful on account of the information it provides on how and where the people of a country are employed. also this helps in ascertaining as to which sector of economic activity contributes more or less to the country’s GDP and per capita income.

If the tertiary sector is developing much faster than the primary sector, then it implies that agriculture is depleting, and the government must take measures to rectify this. The knowledge that the agricultural profession is becoming unpopular or regressive can only come if we know which sector it belongs to. Hence it is necessary to classify economic activities into these there sectors for smooth economic administration and development.

Que.No.2: For each of the sectors that we came across in this chapter why should one focus on employment and GDP? Could there be other issues which should be examined? Discuss.

Answer: For each of the sectors that we came across in this chapter, one should focus on employment and GDP because these determine the size of a country’s economy. A focus on employment and GDP helps determine two important things- per capita income and productivity. Hence, in each of the three sectors, employment rate and status as well as its contribution to the GDP help us understand how that particular sector is functioning and what needs to be done to initiate further growth in it. Yes, the other issues which should be examined are –

Que.No.3: How is the tertiary sector different from other sectors? Illustrate with a few examples.

Que.No.4: What do you understand by disguised unemployment? Explain with an example each from the urban and rural areas.

Answer: Disguised Unemployment is a kind of unemployment in which there are people who are visibly employed but are actually unemployed. This situation is also known as Hidden Unemployment. In such a situation more people are engaged in a work than required. For example:

In rural areas, this type of unemployment is generally found in agricultural sector like – in a family of 9 people all are engaged in the same agricultural plot. But if 4 people are with drawn from it there will be no reduction in output. So, these 4 people are actually disguisedly employed. · In urban areas, this type of unemployment can be seen mostly in service sectors such as in a family all members are engaged in one petty shop or a small business which can be managed by less number of persons. 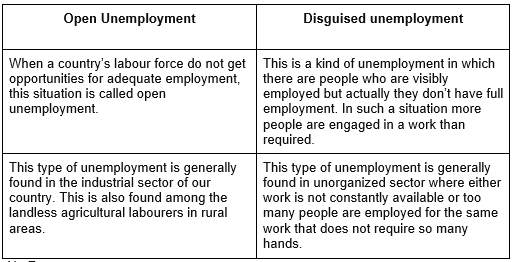 Que.No.6: “Tertiary sector is not playing any significant role in the development of Indian economy.” Do you agree? Give reasons in support of your answer.

Que.No.7: Service sector in India employs two different kinds of people. Who are these?

The service sector in India employs the following two different kinds of people. They are: 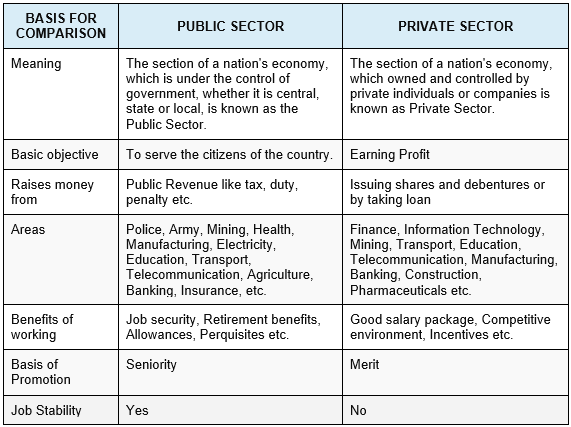 Que.No.2: Explain how public sector contributes to the economic development of a nation.

Ans: In the following ways Public sector contributes to the economic development of a nation:

Que.No.3:  Why is the tertiary sector becoming the most important sector in India?

Ans:  Over 30 years between 1985 and 2015, production in the tertiary sector has increased the most, and it has emerged as the largest producing sector in India replacing the primary sector.

i.  In any country several services such as hospitals, educational instituions, post and telegraph services, police station etc. are required these are called basic services in the developing countries the government has to take the resposibility for provision of these services.

ii.   Development of agriculture and industry leads to development of services like transport, trade, storage etc. Greater the development of the primary and secondary sectors more would be the demand for such services.

iv.   Over the past decade of or so, certain new services such as those based on information and communication technology have become important and essential. The production of these services has been rising rapidly.

Que.No.4: Explain the measures that can be adopted to create more employment?

i.   Construction of dams and canals can lead to a lot of employement generation with in the agricultural sector itself reducing the problem of unemployement.

ii.   If govn. Invest some money on transportation and storage of crops or make better rural roads so that mini trucks reach every where, several farmers can continue to grow and sell their crops. This activity can provide productive employement not just to farmers but also to others who are in services like transport or trade.

iii.   If local Banks give credits at reasonable rates to the small and marginal farmers, they will be able to buy necessary inputs for their crops in time.

iv.   Similarly to provide education to all children, we would need more buildings, teachers and other staff which can also generate employement.

v.    To improve health situation we need health centers, hospitals, and for that doctors, nurses, workers are also needed.

Que.No.5: There has been a big change in the three sectors of the economic activities, but a similar shift has not taken place in the share of employement. Explain the above statement on the basis of facts?

ii.     In the tertiary sector, the production of services rose by 11 times but employement in the services rose only by three times.

iii.    More than ½ of the workers in the country are working in the primary sector producing only one quarter of the goods.

iv.    Seconadary and tertiary sectors produce ¾ of the produce whereas, they only employee ½ of the countries workers.

v.     Primary sector has disguised employement where as workers in the seconadry and tertiary sectors work over time.