Que.No.1: What do you mean  Political parties ?

Ans: Political parties are one of the most visible institutions in a democracy. They reflect fundamental political divisions in a society.

Que.No.2: What are activities of the political parties ?

Que.No.3: Which parties play the role of opposition ?

Ans: Those parties that lose in the elections play the role of opposition to the parties in power.

Que.No.4: Why the political parties are necessary in modern democracy?

Ans: Political parties are necessary in modern democracy as without it , every candidate in the election will be independent. So no one will be able to make any promises to the people about any major policy changes.

Que.No.5: Who recognized the parties in India?

Ans: Election Commission of India had recognized more than 750 parties in India.

Que.No.6: Where is one party rule? What is that party?

Ans: One party system is ruled in China. The communist party is allowed to the rule.

Que.No.7: What kind of political party are in India?

Ans: India has a multi-party system where the government is formed by various parties coming together in a coalition.

Que.No.8: What is called state party?

Ans: A party that secure at least six per cent of the total votes in an election to the Legislative Assembly of a state and wins at least two seats is recognised as state party.

Que.No.9: What is called national party?

Ans: A party that secures at least six per cent of the total votes in the Lok  Sabha  elections or Assembly elections in four states  and wins at least four seats in the Lok Sabha is recognized as national party.

Que.No.10: What are the national recognized parties in our country?

Que.No.1: Explain three functions of  each of the ruling party.

Ans: Functions  of the ruling parties are as follows:-

(i) They play major role in making laws for the country.

(ii) They form the government and run the country.

(iii) They recruit leaders, train them and then make ministers to run the government.

Que.No.2: What are the characteristics of a political party?

Ans: Characteristics of a political party are:-

(i) Every party has a certain structure. The group of people is organized in a proper way.

(ii) All the members agree on some policies and programmes for the society with a view to promote the collective good. They seek to implement these policies by winning popular support through elections.

(iii) Political parties reflects fundamental political divisions in a society. Parties are about a part of the society and thus involve partnership.

Ans: The political parties play an important role in modern democracy as:-

(i) Parties contest elections: In most democracies , elections are fought mainly among the candidates put up by political parties.

(ii)Parties put forward different policies and programmes and the voters choose from them.

(iii)Parties play a decisive role in making laws for a country.

Que.No.4: What do you understand  by the bi-party system ?  Write its one merit and demerit .

(i) In some countries, power usually changes between two main parties. It is also known as two party system.

(ii) In this system, the government is formed by one party and other plays the role of opposition.

(iii) Merit:-This system allows stability of government as no coalition is there.

Demerit:- In this system, only two main parties have a serious chance of winning majority seats to form the government.

Ans: Multi-party system: If several parties compete for power and more than two parties have a reasonable chance of coming to power either on their own strength or in alliance with others, we call it a multi-party system. India adopted a Multi party system because:

(i) There is social and geographical diversity in India.

(ii) India is such a large country which is not easily absorbed by two or three parties.

(iii) The system allows a variety of interests and opinions to enjoy political representation.

Ans: The three major alliances parties in India are:-

(i) The National Democratic Alliance(NDA) formed by BJP

Que.No.7: What is meant by a ‘National Political Party’? State the conditions required to be a national political party.

Ans: National political party have units in the various states, they follow the same policies, programmes and strategy that is decided at the national level.

(i)A party that secure at least six per cent of the total votes in general elections of Lok Sabha or assembly elections in four states.

Que.No.1: What is the need of  the political party? How would its absence affect any country?

Ans: ”Political parties are necessary conditions for a demoracy” because of the following reasons---

(i) We cannot think modern democracies  without political parties. In case there are no political parties every candidate in the elections will be independent , no one will be able to make any promises to the people about any major policy changes. The government may be formed, but its utility  will remain always uncertain.

(ii) Elected representative will be accountable to their constituency for what they do in the locality.But, no one will responsible for how the country will run.

(iii) Political parties agree on policies and programmes to promote collective good and influence people to know why their policy is better than others. They try  to implement  the policies by winning popular support through elections.

(iv) The absence of political parties would affect a democracy badly. The interest of all the people would not reach the Parliament . Therefore, some sections of people would remain behind the mainstream . They would not get all the welfare measures.

(v) The role of opposition party in a democracy necessities the existence of political parties.

Que.No.2: What is meant by national parties? State the criteria for recognizing a party as National and State party.

Ans: (i) democracies that follow a federal system all over the world tend to have two kinds of political parties.

(iii) Those parties which are countrywide parties are called national parties.

(iv) A party that secures at least six per cent of the total votes in an election to the Legislative Assembly of a state and wins at least two seats is recognized as a state party.

Que.No.3: Write the differences between National Party and state party. 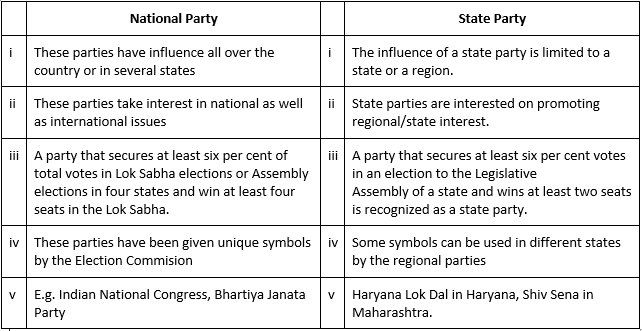 Que.No.4: Write about the national parties of India in detail.

Ans: In India we have seven national parties:-

(i) Indian National Congress (INC):- The Congress party was founded in 1885. It played an important role in Indian politics at the national and state levels after the independence . The party supports secularism and welfare of weaker sections and minorities.

(ii) Bharatiya Janata party (BJP): It was founded in 1980 by reviving the erstwhile Bharatiya Jana Sangh, cultural nationalism is its important element. It wants a uniform civil code for all people living in India.

(iii) Bhahujan Samaj Party (BSP): It was formed in 1984, under the leadership of Kanshi Ram. The party seeks to represent and secure the power for Bhahujan  Samaj which includes dalits,adivasis, OBCs and religious minorities.

(iv) Communist Party of India-Marxist(CPI-M): It was founded in 1964. The party believes in Marxism and Leninism. It supports socialism, secularism and democracy and oppose imperialism and communalism.

(v) Communist Party of India (CPI): It was formed in 1925. The party believes in Marxism and Leninism , secularism  and democracy and is opposed to the forces of secessionism and communalism . It accepts parliamentary democracy as the means of promoting the  interest of working class , farmers and the poor.

(vi) National Congress Party(NCP): It was formed in 1999 following a split in Congress Party. The party supports democracy , Gandhian secularism , equity,social justice and federalism. It wants high offices in the government to be confined to the natural born citizens.

(vii) All India Trinamool Congress (AITC):  It was founded on 1st January 1998 under the leadership of Mamata Banerjee . The flag of the party is symbolized from ‘flowers and grass’ . It believes in secularism and federalism party in the Lok Sabha.

Que.No.5: Name the national political party which gets inspiration from India’s ancient culture and values. Mention four features of that party.

(i)Cultural nationalism or ‘Hindutva’ is an important element in its conception of Indian nationhood and politics.

(ii) The party wants full territorial and political integration of Jammu and  Kashmir  with India.

(iii) A uniform civil code for all people living in the country irrespective of religion and ban on religious conversions.

(iv) Its support base increased substantially in the 1990s.

Que.No.6: a) Locate the 3 states which are governed  by BJP party.

(b) Locate the 2 states which are governed by Indian National Congress Party.