CBSE Class 12 Physics Sound Wave Theory and Examples. Please refer to the examination notes which you can use for preparing and revising for exams. These notes will help you to revise the concepts quickly and get good marks.

(a) Material medium is required for the propagation of sound waves.
(b) Sound waves are longitudinal in nature.
(c) Speed of sound in air at N.T.P. is 332 m/s.
(d) Sound is audiable only between 20 Hz to 20 KHz.
(e) Sound waves can not be polarised.
2. PROPAGATION OF SOUND WAVES (LONGITUDINAL WAVES) 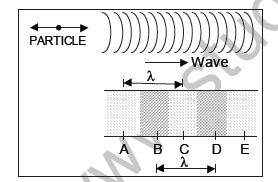 The distance between the centres of two consecutive compressions and two consecutive rarefaction is the wavelength (λ) of the wave. In above figure BD = AC = λ.
3. EQUATION OF A PROGRESSIVE SOUND WAVE

Sound wave is a longitudinal wave with regions of compression & rarefactions. The increase of pressure above its normal value may be written as,

4. VELOCITY OF SOUND IN A MEDIUM


Medium is necessary for sound propagation. These are longitudinal. In a medium, velocity of sound wave & mechanical wave depends on property of medium. It does not depends on amplitude & nature of wave.

WAVE VELOCITY IS AFFECTED BY FOLLOWING PROPERTIES OF MEDIUM :
(i) Elasticity (ii) Inertia
LAW OF NEWTON : In a medium, velocity of sound is given by 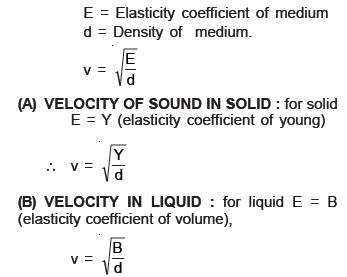 (C) VELOCITY OF SOUND IN GAS :
(I) NEWTON'S LAW : According to it, in a gaseous medium compression & rarefaction are formed slowly during wave propagation. So medium has sufficient time for energy transfer. Thus, temperature of medium remains constant. Sound wave motion is isothermal phenomenon. 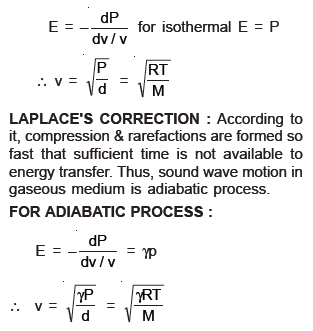 5. FACTORS AFFECTING VELOCITY OF SOUND IN GASEOUS MEDIUM
(A) EFFECT OF PRESSURE AT CONSTANT TEMPERATURE : No effect, because density increases on pressure increasing. 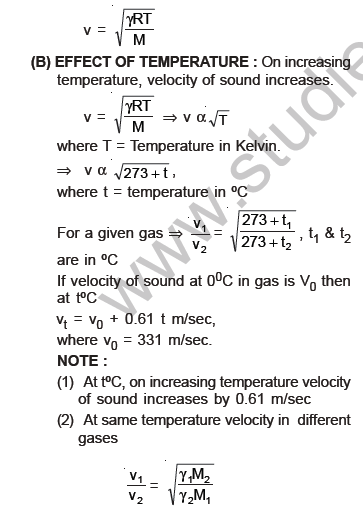 (D) EFFECT OF AMPLITUDE & FREQUENCY : No effect. In a medium, all sound waves which falls in sonic range, travels with equal velocity. Resultant velocity of wave remain same due to superposition of these waves. (Sonic velocity = 20Hz - 20000 Hz)

6. CHARACTERISTICS OF SOUND
There are three important characteristics of musical sound. Loudness, Pitch and Quality.

6.1 LOUDNESS
(i) Loudness of sound is a subjective term and is related to the intensity of sound. The intensity of sound at any point may be defined as the amount of sound energy passing per unit time per unit area around that point in a perpendicular direction. It is a physical quantity which is measured in Watt meter–2 in SI.
(ii) The sound waves falling on the ear drum of the observer produces the sensation of hearing. The sensation of sound which enables us to distinguish between a loud and a faint sound is called loudness. It depends upon the intensity of sound at a place and the sensitiveness of the ear of the observer situated at that place. The same sound may appear to be loud to one person and may appear faint to other. This is the reason that loudness is not entirely a physical quantity.

Download past year Question Papers for Class 12 Physics as per CBSE NCERT KVS syllabus with solutions in pdf free
More..