CBSE Class 8 Social Science Sample Paper Set T.Sample Papers are the very important for every student. The sample papers should be practiced to gain extra marks in examinations. The sample papers have been prepared based on summative assessment1 and summative assessment 2 pattern. The sample papers have been prepared based on pattern of last year examinations and as per latest changes in the syllabus. Students, teachers and parents can download all CBSE educational material and very well prepared worksheets from this website.  All CBSE educational material is developed by our panel of teachers, have also been submitted by CBSE teachers and students.

(i) Tagore wanted an education that could help Indians recover their Sense of dignity and self- respect.

(ii) Motilal Nehru expressed the pain and anger of the country by renouncing his knighthood.

(iv) The demand for Purna Swaraj in 1929 was made under the presidentship of Gandhi.

(i) What difficulties were faced by the poor children of peasant families as a result of new rules and routines?

(ii) Why did the reforms take place in the 19th century?

Q.5. Answer the questions in detail: (any two) [4 × 2= 8]
(i) In the British period, what new opportunities opened up for people who came from castes that were regarded as low?
(ii) What was the condition of Indian pathshalas during the British rule?
(iii) What economic impact did the First World War have on India?
Q.6. Mark the following places on the physical map of India (Answers and marking to be done on the map only) [1 × 5= 5]
(i) The place where Prarthana Samaj was established.
(ii) The place where congress split.
(iii) Centre of Home Rule League.
(iv) The place where Jallianwala Bagh Massacre took place.
(v) Centre of Singh Sabha. 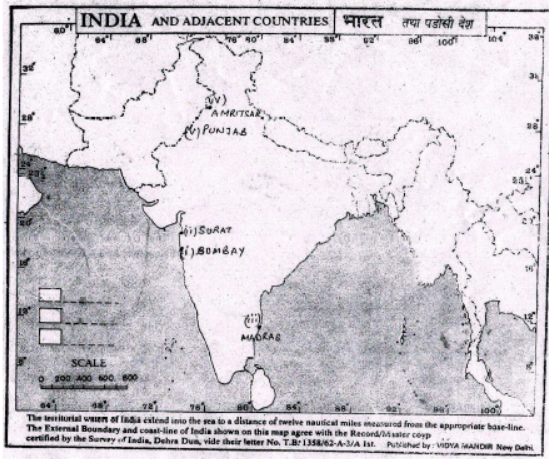 CIVICS- [20]
Q.1. Fill in the blanks: [½ × 4= 2]
(i) Around ________ percent of India‟s population is Adivasi.
(ii) The area around Niyamgiri Hill located in Kalahandi district of Orissa is inhabited by _________, an Adivasi community.
(iii) The Scheduled Castes and the Scheduled Tribes (Prevention of Atrocities) Act was framed in the year __________.
(iv) The __________ policy reserve seats in education and government employment for Dalits and Adivasis.
Q.2. Answer in a word: [½ × 4= 2]
(i) A person who does not get adequate nutrition or food-
(ii) To challenge someone or something-
(iii) To exclude or banish an individual or a group-
(iv) An act that violates all norms of decency and dignity that a society believes in-
Q.3. Define the following: [1 × 4= 4]
(i) Ghettoisation
(ii) Marginalised
(iii) Displaced
(iv) Assertive
Q.4. Answer in brief: [2 × 3= 6]
(iv) Write a short note on Article 17.
(v) List two reasons why Adivasis are becoming increasingly marginalised.
(vi) How have the Fundamental Rights been drawn on or used by the marginalised?
Q.5. Answer in detail: (Any two) [3 × 2= 6]
(i) How does the reservation policy work?
(ii) What measures are being taken by the government to promote social justice in the Indian society?
(iii) Which factors have been responsible for the forced migration of Adivasis from their homeland?
GEOGRAPHY- [30]
Q.1. Fill in the blanks: [½ × 6= 3]
(i) In the world 50% population are engaged in _________ activity.
(ii) Silicon Valley is located near the __________ Mountains.
(iii) The __________ industry deals in the storage, processing and distribution of information.
(iv) Sixty per cent of the world‟s people stay in just ________ countries.
(v) Birth, death and _________ are three main factors that cause population change.
(vi) __________ requires 210 frost- free days for growth.
Q.2. Define the following terms : [1 × 3= 3]
(i) Organic farming
(ii) Industry
(iii) Population change
Q.3. Distinguish between: [2 × 2= 4]
(i) Primary activities and Secondary activities
(ii) Small scale and large scale industry
Q.4. Answer the following questions in brief: [2 × 3= 6]
(i) What is shifting cultivation? Write its two disadvantages.
(ii) What do you understand by industrial system? Which process involved in it.
(iii) Why is the study of population necessary?
Q.5. Study the diagram and answer the questions that follow: [1 × 3= 3]
(i) Why is the base of pyramid broad?
(ii) Which country is represented through it? 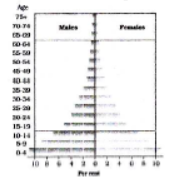 (iii) Which two main aspects of population composition are shown through it?
Q.8. Answer the following questions in detail: (Any two) [4 × 2= 8]
(i) Compare the farms in India with that in USA.
(ii) Classify industries on the basis of ownership and explain them with example.
(iii) Write any four factors that affect the distribution of population.
Q.9. Identify the following places and fill in the given map. Attach the map with your answer sheet: [½ × 6= 3]
(a) A cotton textile centre
(b) A woolen textile centre
(c) An iron and steel industry
(d) A silk industry
(e) An iron and steel industry centre
(f) A software technology park