1 ‘Shifting cultivation is known by different names in different parts of the world’. Name any one of them.

2 Give two examples of industries that are not involved in manufacturing goods.

3 What do you understand by ‘emigration of population’?

5 Who was the founder of the AryaSamaj?

7 Schedule tribe is the term used for ____________, used by Indian government in various official documents.

8 What percentage of seats is reserved for women in RajyaSabha?

9 Under which article of the constitution universal access to water is recognized?

11 Mention any three factors that influence the location of Industries.

12 “Population of the world is unevenly distributed” Do you agree? - justify your opinion by giving few points?

13 State the efforts taken by the East India Company to streamline the working of pathshalas.

14 Justify the strong anti-Indian stance of James Mill and Macaulay.

15 Explain the activities that educated- women were able to organise, to help change the existing 'regressive' social conditions

16 Write briefly about Gandhi’s Quit India Movement and its course.

17 Discuss the religious beliefs of Adivasis.

18 Why are public facilities such as schools and hospitals owned privately in cities? 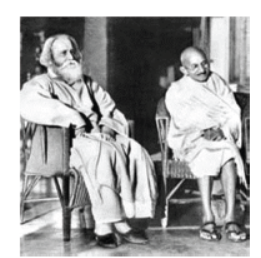 1. Identify the two individuals in the given picture who criticized western education.
2. How were their views about western education different from each other?
20 Are there any laws for producers and consumers? If yes, then what they state?
21 How were the victims of the Bhopal Tragedy cheated out of justice? 3
22 Distinguish between Subsistence farming and Commercial farming by giving five points.
23 “India has a glorious tradition of producing good quality cotton textile” – Justify the statement by giving few points.
24 Illustrate along with a diagram the significance of population pyramid of Kenya.
25 Read the source given and answer the following question:
In 1927, Ambedkar said:
We now want to go to the Tank only to prove that like others, we are also human beings …
Hindu society should be reorganized on two main principles – equality and absence of casteism.
1. Which section of the society was represented by Ambedkar?
2. When did he start the Temple Entry Movement?
3. What was his aim behind the Temple Entry Movement?
4. State the caste prejudice he experienced as a child in his day to day life.
26 The Congress in the first twenty years was “moderate” in its approach. Explain. What were the major demands of the moderates?
27 Identify and analyse some points of distinction under Islam.
28 Do you think the public distribution facility in our country is adequate and fair? Justify
29 What are the advantages to foreign companies in setting up production in India?
30 On the Political map of India locate the following important centres of Freedom movement:
1. Surat2.
2. Champaran
31 On the same Political map of India locate the following Iron and Steel industries:
1. Salem
2. Durgapur
3. Bhilai