1 Is water a renewable or non renewable resource?
Ans: Renewable
2 Name two countries facing water shortage.
Ans: Africa, west Asia, south Asia, western USA, North West Mexico, parts of South America and Australia.
3 Which mineral is termed as ‘Black Gold’ and why?
Ans: Petroleum is referred to as black because: -
1) its derivatives like diesel, kerosene and petrol are very expensive.
2) It is black in colour when drilled.
4 Name the last powerful ruler of the Mughal Empire.
Ans: Aurangzeb.
5 Define the term “Mahal” in the British revenue records.
Ans: Mahal is a revenue estate which may be a village or a group of villages.
6 From which Hindi word was the word sepoy derived?
Ans: The term "sepoy" is derived from the Persian word meaning "infantry soldier" in the Mughal Empire.
7 State the essence of secularism.
Ans: All forms of domination related to religion should end.
8 Mention the year when the Electronic Voting Machines were used throughout the country for the first time.
Ans: In 2004
9 State the meaning of Appellate jurisdiction.
Ans: This means that a person can appeal to a higher court if they believe that judgement passed by the lower court is not just.
10 Classify the resources on the basis of their origin and explain them.
Ans: Biotic and abiotic (1mark)
Abiotic resource                         Biotic resource
Abiotic resources are                  Biotic resources are
nonliving resource.                       living resource.
Example- soils, minerals             Example- Plants and
and rocks.                                   animals.
11 Explain the importance of natural vegetation. (any3)
Ans: Vegetation is useful to us in the following way:
1) Plants provide us with timber
2) Give shelter to animals,
3) Produce oxygen we breathe,
4) Protects soils so essential for growing crops,
5) Act as shelter belts,
6) Help in storage of underground water,
7) Give us fruits, nuts, latex, turpentine oil, gum, medicinal plants
8) Provide the paper that is so essential for your studies.
12 Give any three differences between conventional and non-conventional sources of energy.
Ans: 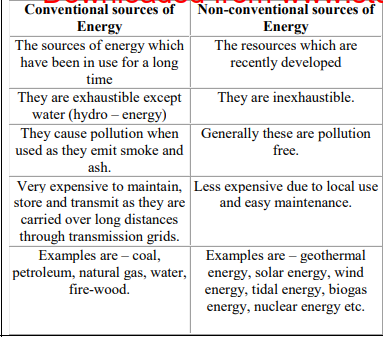 13 “The British army brought several changes in the composition .” Do you agree with the given statement? Give reasons.
Ans: Several changes occurred in the composition of the Company’s army:
i) The company began recruitment for its own army, which came to be known as the sepoy.
ii) With the advance of the warfare technology the cavalry recruitment declined.
iii) The British began to give a uniform military training and discipline in the European style .
14 Give two reasons which led to the Anglo Mysore War .Explain the factors that make Tipu Sultan an admirable entity.
Ans: i) Mysore had grown in strength under the leadership of powerful rulers like Haider Ali and Tipu Sultan.
ii) Mysore controlled the profitable trade of the Malabar coast where the Company purchased pepper and cardamom. Tipu Sultan stopped the the export of sandalwood, pepper and cardamom through the ports of
his kingdom and disallowed local merchants from trading with the company.
iii) The close relationship between Tipu Sultan and the French in India made the British furious.
Values: We learn that like Tipu Sultan we should be brave , courageous and should not give up easily.
15 Under whose Governor Generalship was the Doctrine of Lapse devised? Highlight the policy in your own words with the help of examples.
Ans: i) Under the Governor-Generalship of Lord Dalhousie Doctrine of Lapse was devised.
ii)The doctrine declared that if an Indian ruler died without a male heir his kingdom would
“lapse” , that is , become part of Company territory.
iii) For ex – Sambalpur , Udaipur , Satara , Nagpur and Jhansi.
16 Give reasons as to why were the planters reluctant to expand the area under ‘nij’ cultivation till late 19th century.
Ans: i) The planters found it difficult to expand the area under nij cultivation. Indigo could be planted on fertile lands and these were already densely populated.
ii) Labour force was not easily available. Peasants were busy with rice cultivation.
iii) Nij cultivation on a large scale also required many ploughs and bullocks. Investing on them was a big problem.
17 Mention in your words what impact did Bahadur Shah Zafar’s support to the rebellion have on the people and the ruling families?
Ans: i) Bahadur Shah Zafar’s support to the rebellion boosted the morale of the people and the ruling families. They became united to fight the British authority.
ii) People of the towns and villages rose up in rebellion and rallied around local leaders.
iii) Nana Sahib gathered forces and expelled the British garrison from the city of Kanpur
and proclaimed himself Peshwa.
18 Discuss the significance of Pledge of Allegiance.
a.In the U.S.A most children in govt school begin their day reciting the ‘Pledge of Allegiance’.
b.This pledge includes the words ‘under God’.
c. It was established more than 60 yrs ago that govt school students are not required to recite the pledge if it conflicts with their religious beliefs.
19 ‘Parliament has more and more people from different backgrounds.” Analyse the statement. The
i).Parliament is made up of all representatives together and it guides the government.
ii). It means the people through their chosen representatives from different caste and religion form the government and control it.
iii). Some seats are reserved for the people belonging to SC/ST category.
20 As an organ of the state, Judiciary plays a crucial role in the functioning of India’s democracy. Justify the statement.
i) Judiciary settles the disputes. And punishes the guilty.
ii)Judiciary has the power to modify or cancel the laws if it finds that they violate the basic structure.
iii) In case our Fundamental Rights are violated we can approach the Supreme Court or the High Court.