a) Igneous b) Sedimentary c) Metamorphic d) None of these

ii) The cultivation of fruits, flowers and vegetables is called - (1)

a) Horticulture b) Sericulture c) Apiculture d) None of these

a) Primary b) Secondary c) Tertiary d) None of these

a) Formation of the Indian National Congress

b) The Lucknow Pact

c) Partition of Bengal d) None of these

vi) Rabindranath Tagore renounced his knighthood after the - (1)

c) Passing of the Rowlatt Act d) None of these

Q.4 Give one example of a large scale industry and cottage industry. (1)

Q.7 How did the Morley Minto Reforms try to destroy Hindu-Muslim Unity? (1)

Q.8 State the purpose of the khilafat movement. (1)

Q.9 What is Universal Adult Franchise? (1)

Q.10 When is a coalition government formed? (1)

Q.13 What is organic farming, ranching and information technology? (3)

Q.14 Give three reasons why Bangalore has emerged as the main centre of India’s IT industry. (3)

Q.17 Mention three major tasks that the Indian government had just after independence. (3)

Q.19 When and by whom was the Muslim League established? What was its objective? (3)

Q.20 Write a note on the Jallianwala Bagh incident. (3)

Q.21 Name the first President of India. How is India’s President elected? (1+2)

Q.22 Give three points of difference between Civil and Criminal cases. (3)

Q.23 Give the full form of FIR, PIL and SAARC

Q.24 Discuss the role of a public prosecutor in a trial. (3)

Q.29 Discuss the strengths and weaknesses of Indian democracy.

Who is the real head of the union executive? Mention it’s four functions. (5)

Q.30 Mention some steps that can be taken to reduce the damages caused by industrial accidents. (5)

Q.31 Write a note on the conservation of mineral and power resources. (5)

Q.32 In April 2001, the Rajasthan branch of an organization called People’s Union for Civil Liberties (PUCL) filed a PIL in the Supreme Court  or enforcement of the right to food as part of the Fundamental Right to life mentioned in Article 21 of India’s Constitution. The petition pointed out to the court that starvation deaths were being reported from various states at a time when the country’s food stocks were overflowing. While hearing the case, the Supreme Court gave various orders to the state governments to increase the people’s access to food.

i) What value do the ‘People’s Union for Civil Liberties’ teach us. (1)

Q.33 In the outline map of India, features have been marked 1, 2, and 3. Identify them with the help of the following informations:

1) An Iron and Steel Plant (SAIL) located in Chhattisgarh. (1)

In the political map of India, locate and label the following:

6) A SAARC Nation located to the South-East of India. 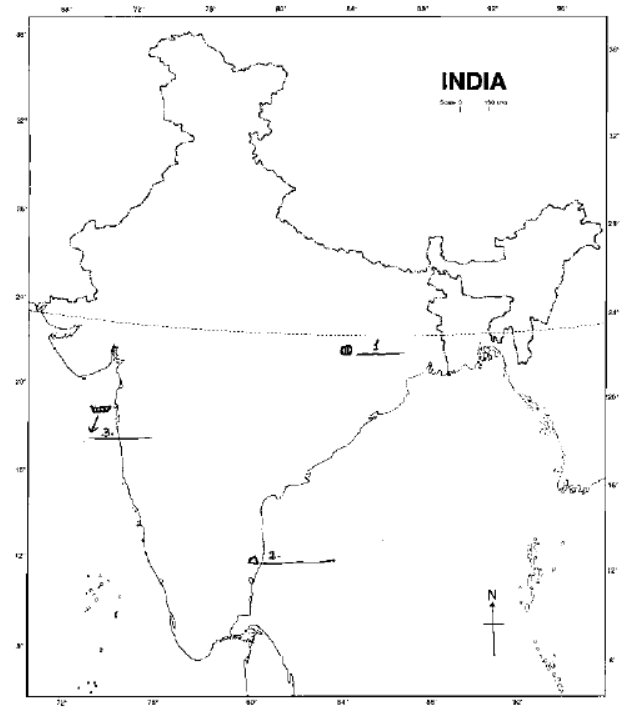