1 Nature has endowed abundant substances all around us. Which of these can be identified as resources?

2 Mention two causes of water pollution in the rivers.

3 Which mineral is termed as black gold and why?

4 Mention one unconventional resource that is best suited for the tropical regions.

5 Why do you think it was essential to adopt the feature of secularism in the Indian constitution?

6 Who is the signing authority in India for a bill to become a law?

7 What is meant by rule of law?

8 Why is battle of Plassey considered a turning point in Indian history?

9 Which tribal group was reluctant to work as labourers?

10 Who were the architects that were called to design the city of New Delhi?

11 Observe the storyboard given below. The government schools do not promote any religious prayer nor celebrate any religious festivals. Which feature of the constitution does this follow? What values do you inherit from this? 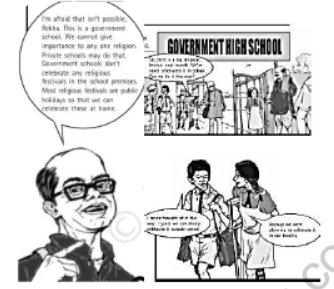 12 Although the first war of independence had forced the East India Company to leave India, yet it failed to seek independence from the British. Mention any two values that were missing during this huge revolt.
13 What are renewable resources? Why should we switch to renewable resources for our development?
14 Soil is considered as the valuable dust. Identify and explain the soil conservation methods depicted in the images below.

15 Hydro electricity is a clean and renewable source of energy. Yet building dams on rivers is often criticized by environmental activists. Mention any three reasons why building dams is a hazard.
16 What is Question hour in the parliament? How do the MPs control and guide the government?
17 Which article of the constitution illustrates the rights of an arrested person? Mention two rights as stated in this article.
18 What is an archive? Which two buildings were especially constructed by the British for archiving?
19 Explain the policy of Doctrine of Lapse used by the East India Company to annex Indian princely states.
20 Explain three activities professed by the tribal groups in India. 3
21 Explain the socio religious causes that led to the revolt of 1857. 3
22 What did the British do to make the city of Delhi forget its Mughal past after the revolt of 1857?
23 The amount of water present on earth is constant; still some regions have started facing a shortage in the supply of fresh water.
a. Give reasons for this rising water crisis.
b. What are the main causes of water pollution?
c. Mention any one method of water conservation that you have observed in your school.
24 a. Mention any two conventional sources of energy and state their disadvantages.
b. Identify and elaborate the non-conventional energy resource depicted in the image under the following headings-

25 Explain in detail the Parliamentary form of government. 5
26 Explain the process of election procedure in India. 5
27 Mention the mechanism devised by the judiciary to make justice accessible to all. How is this
mechanism implemented? Quote any example of cases where this mechanism has proved its worth.
28 Mention any five aftermaths of the great revolt that is remembered as the first war of independence in Indian history.

Please click the link below to download the full pdf file for CBSE Class 8 Social Science Sample Paper Set I.