1 After the failure of Permanent settlement, the British adopted new forms of land revenue settlement. Highlight the main feature of the revenue policy laid in South India.

3 Interpret the idea of ‘Pledge of Allegiance’.

4 Give an example from any part of world where the ideals of secularism were violated.

6 What provision is laid under Right to Constitutional Remedies?

7 Coal mining is banned in Mahan Forest of Madhya Pradesh. Give a reason

8 What is an ecosystem?

9 State the importance of resource conservation.

10 Can you recall the conditions laid under Subsidiary Alliance?

11 “By the seventeenth century, European cloth producers persuaded their governments to relax the ban on indigo import. The French began cultivating indigo in St Domingue in the Caribbean islands, the Portuguese in Brazil, the English in Jamaica, and the Spanish in Venezuela. Indigo plantations also came up in many parts of North America.”

a. What is the use of indigo?

b. Name the alternate plant for indigo produced in temperate countries.

c. In spite of so many countries producing indigo, Indian indgo was much in demand. Why?

12 The Reformation policy of Britishers in 1857 led to social threat to the natives. Analyse.

13 What objections did the sepoys have to the new cartridges that they were asked to use. Give two reasons for the spread of mutiny.

14 Constitution is important in the working of democratic country. Justify by giving a few points.

15 “Secularism in India means equal treatment of all religions by the state. Unlike the Western concept of secularism which means a separation of religion and state, the concept of secularism in India envisions acceptance of religious laws as binding on the state, and equal participation of state in different religions”. In reference to the given context answer the following questions:
a. Define secularism.
b. How Indian secularism different from secularism of other countries. Give one example to support your answer
16 Will the government intervene if some religious groups says that their religion allows them to practice infanticide . Give reasons for your answer.

a. The figure given above represents which house of Parliament
b. How the members are elected
c. Who presides over the meeting of the house? Who is the current presiding officer of the house
18 Highlight the proceedings of elections in India 3
19 Study the given picture and answer the questions which follow. 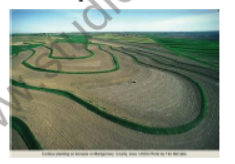 a. . Identify the type of soil conservation method shown in the picture.
b. State any two causes for soil erosion.
20 Explain. The term resource with the help of example. When can a resource become economically valuable?
21 Enlist few points of advantages and disadvantages for wind energy. 3
22 “The East India Company was granted the right to carry out trade with the east under the Royal charter. Among various European companies the French East India Company became major rival to British expansion…..This led to fierce competition”
In reference to the above text answer the following questions
a. Who granted the Royal Charter and in which year.
b. What led to the fierce battles among the European traders. Also state the effect of this competition
c. Name few goods and commodities which attracted the European traders.
23 List down the problems of Nij Cultivation. 5
a. Identify this great Indian sepoy.
b. Narrate the incident at Meerut which took place immediately after this young soldier was hanged to death.
c. State the impact of this event in Delhi
25 With the objective of transforming India into strong democratic society the framers of the constitution laid down some important features. List down and explain briefly these key features of Indian constitution.
26 The Indian Parliament enables its citizen to participate in decision making and control the government. In this reference answer the following questions:
a. What is the need of parliament?
b. The reservation of Dalits and women is important in India. Give reasons.
27 a. How is sustainable development different from resource conservation?.
b. What principles are laid for sustainable development?
28 Draw a well labeled diagram of soil profile and explain any three factors of soil formation.
29 a. Distinguish between metallic and non metallic mineral
b. Explain any three techniques of mineral extraction
30 On a physical map of India locate the major centres of revolt during 1857:
i. Jhansi ii. Lucknow
31 On the same physical map of India locate the power stations of India:
i. Narora ii. Kalpakkam iii. Tarapur