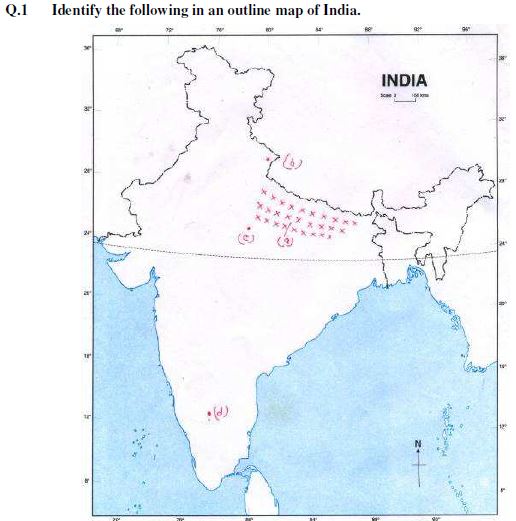 a) The type of soil.

b) The Biosphere reserve recognized by UNESCO.

c) The place annexed under Doctrine of Lapse.

a) Battle of Plassey

b) Sepoy Mutiny/First war of Independence

a) ______ are rows of trees that break the force of raindrops and check the speed of winds.

b) The ______ is a natural scavenger which is now endangered in India.

c) ______ was the first state to accept subsidiary alliance.

Q.5 Give appropriate term for the following statements. (1×4=4)

a) This revenue settlement involved collecting revenue directly from cultivators.

b) A country having an elected head of state.

c) The rights which are considered essential for the well-being of citizens.

d) A proposal to pass a new law or to change an existing one.

a) Constitution b) Preamble c) Biome

a) The Battle of Buxar took place in

b) Some of our Fundamental Rights can be restricted during

i) elections ii) festivals iii) wars iv) none of these

c) With increasing distance from the equator, growing season of plants generally

d) How many members can be nominated to the Lok Sabha?

e) Which of the following places remained almost unaffected by the Revolt of 1857 ?

Q.8 Substitute the underlined words to correct the following statements. (1×5=5)
a) Macro Polo reached India in 1498.
b) The most important administrative unit in British India was Province.
c) India’s last governor general under the company was Lord Dalhousie.
d) The Prime Minister can be impeached by the Parliament.
e) Children aged between 8 and 12 years have the right to get free primary education. 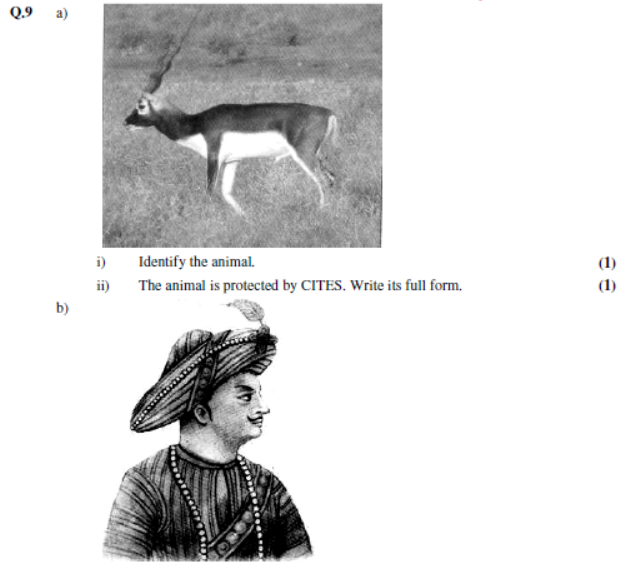 Q.11 Answer the following questions in not more than 40 words. (Any 6)
a) Write down three points of difference between Lok Sabha and Rajya Sabha.
b) What were the responsibilities of a collector in British India?
c) Give reasons for the company’s hostility towards Tipu Sultan.
d) What causes forest fires?
e) What are multi-purpose river valley projects? Give one example.
f) State which fundamental right do the following statements talk about?
i) Abolition of untouchability
ii) Restriction on bonded labour.
iii) Right to settle in any part of India.
g) What were the political causes of the Revolt of 1857?
SECTION – C
Q.12 Answer the following questions in not more than 100 words. (Any 5)
a) What were the terms of Lord Wellesley’s Subsidiary alliance?
b) Mention any five effects of the land-revenue settlements introduced by the British.
c) Discuss why the sepoys were discontented.
d) Briefly discuss the fundamental duties of Indian citizen.
e) Name the components of our union legislature. Who can contest Lok Sabha elections?
f) Mention some ways of conserving vegetation and wild life.
g) What are the two ways in which soil gets polluted? Briefly write any three methods of soil conservation.
Q.13 Read the given extract and answer the questions that follow.
Indigo planting in Bengal dated back to 1777. With expansion of British power in Bengal, indigo planting became more and more commercially profitable due to the demand for blue dye in Europe. The indigo planters mercilessly pursued the peasants to plant indigo instead of food crops. They provided loan and once a farmer took such loans, he remained in debt for whole of his life. Indigo planters resorted to mortgages or destruction of their property if they were unwilling to obey them. Government rules favoured the planters. Out of the severe oppression unleased on them, the farmers resorted to revolt.
a) Whose problem has been highlighted in the above text?
b) Do you justify the revolt started by Indigo peasants? Give reason.
c) What measures would you suggest for bringing about improvement in the life of peasants in India at present?