Science
Download PDF
Read and download free pdf of CBSE Class 9 Physics Motion Worksheet Set A. Students and teachers of Class 9 Physics can get free printable Worksheets for Class 9 Physics in PDF format prepared as per the latest syllabus and examination pattern in your schools. Standard 9 students should practice questions and answers given here for Physics in Grade 9 which will help them to improve your knowledge of all important chapters and its topics. Students should also download free pdf of Class 9 Physics Worksheets prepared by school teachers as per the latest NCERT, CBSE, KVS books and syllabus issued this academic year and solve important problems provided here with solutions on daily basis to get more score in school exams and tests

Class 9 Physics students should refer to the following printable worksheet in Pdf for Motion in standard 9. This test paper with questions and answers for Grade 9 Physics will be very useful for exams and help you to score good marks

Worksheets have become an integral part of the education system. Worksheets are very critical for every student to practice his/ her concepts. Students, teachers and parents can download all CBSE educational material and extremely well prepared worksheets from this website. All revision worksheets, Sample papers, Question banks and easy to learn study notes for all classes and subjects have been prepared based on the latest guidelines sent by CBSE. All CBSE educational material is developed by our panel of teachers, have also been submitted by thousands of teachers and students. The study material has been carefully compiled by the best teachers in India. Worksheets have been submitted

by teachers of various CBSE schools and also have been carefully developed keeping into consideration the latest CBSE syllabus.

Fill in the blanks :

Question. Displacement has both direction and magnitude for its complete description and these physical quantities are called a _____

Question. The to and fro motion of a simple pendulum is an example of a periodic or an _________

Question. When a body moves from one position to another the shortest distance between the initial and final position of the body along with its direction is known as _______

Question. The smallest time interval that can be measured with commonly available clocks and watches is____________.

Answer : speed of a vehicle.

Question. Physical quantities that do not require direction for their complete description are called ______ 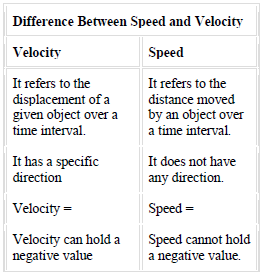 Question. A racing car has a uniform acceleration of 4 m s-2. What distance will it cover in 10 s after start?
Answer : Given, the car is initially at rest; initial velocity (u) = 0 ms-1
Acceleration (a) = 4 ms-2
Time period (t) = 10 s
As per the second motion equation,
Therefore, the total distance covered by the car (s) =
= 200 meters
Therefore, the car will cover a distance of 200 meters after 10 seconds. 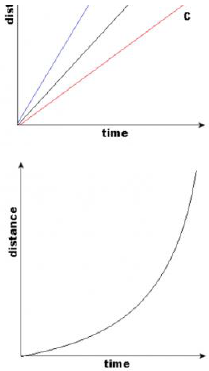 Since there is no change in the velocity of the object (Y-Axis value) at any point of time (X-axis value), the object is said to be in uniform motion.

Since there is no change in the distance traveled by the object (or the Y-Axis value) at any point in the X-Axis (time), the object is at rest.

Question. What does the odometer of an automobile measure?
Answer : The odometer measures the total distance traveled by the automobile.

Question. A stone is thrown in a vertically upward direction with a velocity of 5 m s-1. If the acceleration of the stone during its motion is 10 m s-2 in the downward direction, what will be the height attained by the stone and how much time will it take to reach there?
Answer : Given, initial velocity (u) = 5 m/s
Terminal velocity (v) = 0 m/s (since the stone will reach a position of rest at the point of maximum height)
Acceleration = 10 ms-2 in the direction opposite to the trajectory of the stone = -10 ms-2
As per the third motion equation,
Therefore, the distance traveled by the stone (s) =
Distance (s) = 1.25 meters
As per the first motion equation,
Therefore, time taken by the stone to reach a position of rest (maximum height) =
= Time taken = 0.5 seconds
Therefore, the stone reaches a maximum height of 1.25 meters in a timeframe of 0.5 seconds.

1. If the displacement of an object is proportional to square of time, then the object moves

(a) uniform velocity
(b) uniform acceleration

2. The distance time graph of a body coincides with its time axis. The body must be

(a) in uniform motion

3. From the given v – t graph (see below Fig.), it can be inferred that the object is

(a) in uniform motion

4. The velocity time graph of a body is parallel to the time axis. The body is

(b) having uniform acceleration

5. A particle is moving in a circular path of radius r. The displacement after half a circle

6. A body is thrown vertically upward with velocity u, the greatest height h to which it will