Class 8 Science Some Natural Phenomena Exam Notes. Please refer to the examination notes which you can use for preparing and revising for exams. These notes will help you to revise the concepts quickly and get good marks.

2.Types of charges and their interaction

The ancient Greeks knew as early as 600 B.C. that when amber (amber is a kind of resin) was rubbed with fur, it attracted light objects such as hair. If you take off these clothes in the dark, you see even a spark and hear crackling sound.

In 1752 Benjamin Franklin, an American scientist, showed that lightning and the spark from your clothes are essentially the same phenomena.

when a plastic comb is rubbed with dry hair, it acquires a small charge. These objects are called charged objects. In the process of charging the plastic comb, hair also get charged.

The method of charging by friction is called frictional charging.

Types Of  Charges And Their Interaction

There are two kinds of charges same kind of charges repel each other, while charges of different kind attract each other

It is a convention to call the charge acquired by a glass rod when it is rubbed with silk as positive. The other kind of charge is said to be negative.

Take an empty jam bottle. Take a piece of cardboard slightly bigger in size than the mouth of the bottle. Pierce a hole in it so that a metal paper clip could be inserted. Cut two strips of aluminium foils. Hang them on the paper clip as shown. Insert the paper clip in the cardboard lid so that it is perpendicular to it (Fig.). Charge a refill and touch it with the end of the paper clip. Observe that they repel each other.

This device is known as electroscope. Thus, we find that electrical charge can be transferred from a charged object to another through a metal conductor.

During the development of a thunderstorm, the air currents move upward while the water droplets move downward. These vigorous movements cause separation

When the magnitude of the accumulated charges becomes very large, the air which is normally a poor conductor of electricity, is no longer able to resist their flow. Negative and positive charges meet, producing streaks of bright light and sound. We see streaks as lightning (Fig.). The process is called an electric discharge. The process of electric discharge can occur between two or more clouds, or between clouds and the earth & at that moment air near lightning path reaches up to 30,000°C 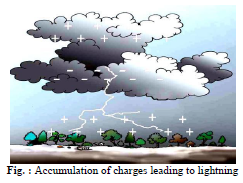 A house or a building is a safe place. If you are travelling by car or by bus, you are safe inside with windows and doors of the vehicle shut.

If outside the home :

Open vehicles, like motorbikes, tractors, construction machinery, open cars are not safe. Open fields, tall trees, shelters in parks, elevated places do not protect us from lightning strokes. Carrying umbrella is not a good idea at all during thunderstorms.

If you are in a forest, take shelter under shorter trees. If no shelter is available and you are in an open field, stay far away from all trees. Stay away from poles or other metal objects. Do not lie on the ground. Instead, squat low on the ground. Place your hands on your knees with your head between the hands (Fig.).

This position will make you the smallest target to be struck.

If inside the house :

Lightning can strike telephone cords, electrical wires and metal pipes. During a thunderstorm contact with these should be avoided. It is safer to use mobile phones and cordless phones. However, it is not wise to call up a person who is receiving your phone through a wired phone. Bathing should be avoided during thunderstorms to avoid contact with running water. Electrical appliances like computers, TVs, etc., should be unplugged. Electrical lights can remain on. They do not cause any harm.

Lightning Conductor is a device used to protect buildings from the effect of lightning. A metallic rod, taller than the building, is installed in the walls of the building during its construction. One end of the rod is kept out in the air and the other is buried deep in the ground

The rod provides easy route for the transfer of electric charge to the ground.
The metal columns used during construction, electrical wires and water pipes in the buildings also protect us to an extent. But do not touch them during a thunderstorm. 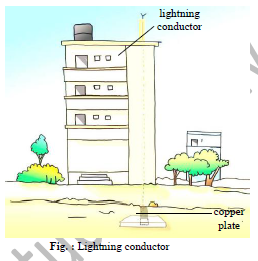 If a thunderstorm occurs there is always a possibility of lightning and cyclones accompanying it. So, we get time to take measures to protect ourselves from the damage caused by these phenomena. There is, however, one natural phenomenon which we are not yet able to predict. It is an earthquake. It can cause damage to human life and property on a huge scale.

An earthquake is a sudden shaking or trembling of the earth lasting for a very short time. It is caused by a disturbance deep inside the earth’s crust.

Earthquakes occur all the time, all over the earth. They are not even noticed. Major earthquakes are much less frequent. They can cause immense damage to buildings, bridges, dams and people. There can be a great loss to life and property.

The earthquakes can cause floods, landslides and tsunamis. A major tsunami occurred in the Indian Ocean on 26th December 2004. All the coastal areas around the ocean suffered huge losses.

The tremors are caused by the disturbance deep down inside the uppermost layer of the earth called the
crust (Fig.). 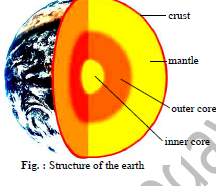 The outermost layer of the earth is not in one piece. It is fragmented. Each fragment is called a plate (Fig.). 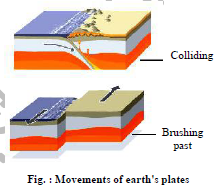 These plates are in continual motion. When they brush past one another, or a plate goes under another due to collision (Fig.), they cause disturbance in the earth’s crust. It is this disturbance that shows up as an earthquake on the surface of the earth.

Tremors on the earth can also be caused when a volcano erupts, or a meteor hits the earth, or an underground nuclear explosion is carried out. However, most earthquakes are caused by the movement of earth’s plates.

• In highly seismic areas, the use mud or timber is better than the heavy construction material. Keep roofs as light as possible. In case the structure falls, the damage will not be heavy.

• It is better if the cupboards and shelves are fixed to the walls, so that they do not fall easily.

• Be careful where you hang wall clocks, photo-frames, water heaters etc., so that in the event of an earthquake, they do not fall on people.

• Since some buildings may catch fire due to an earthquake, it is necessary that all buildings, especially tall buildings, have fire fighting equipment in working order.

(b) At the time of earthquakes

In the event that an earthquake does strike, take the following steps to protect yourself :

• Take shelter under a table and stay there till shaking stops.

• Stay away from tall and heavy objects that may fall on you.

• If you are in bed, do not get up. Protect your head with a pillow.

• Find a clear spot, away from buildings, trees and overhead power lines. Drop to the ground.

• If you are in a car or a bus, do not come out. Ask the driver to drive slowly to a clear spot. Do not come out till the tremors stop.

The tremors produce waves on the surface of the earth.

These are called seismic waves. The waves are recorded by an instrument called the seismograph. 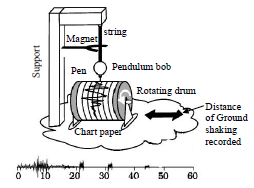 The instrument is simply a vibrating rod, or a pendulum, which starts vibrating when tremors occur. A pen is attached to the vibrating system. The pen records the seismic waves on a paper which moves under it. By studying these waves, scientists can construct a complete map of the earthquake, as shown in figure. They can also estimate its power to cause destruction.

IMPORTANT POINTS TO BE REMEMBER

• Some objects can be charged by rubbing with other objects.

• There are two kinds of charges — positive charge and negative charge

• The electrical charges produced by rubbing are called static charges.

• When charges move, they constitute an electric current.

• An electroscope may be used to detect whether a body is charged or not.

• The process of transfer of charge from a charged object to the earth is called earthing.

• The process of electric discharge between clouds and the earth or between different clouds causes lightning.

• Lightning conductors can protect buildings from the effects of lightning.

• An earthquake is a sudden shaking or trembling of the earth.

• Earthquake is caused by a disturbance deep inside the earth’s crust.

• It is not possible to predict the occurrence of an earthquake.

• Earthquakes tend to occur at the boundaries of earth’s plates. These boundaries are known as fault zones.

• Destructive energy of an earthquake is measured on the Richter scale. The earthquake measuring 7 or more on Richter scale can cause severe damage to life and property.

• We should take necessary precautions to protect ourselves from earthquakes.