CBSE Class 8 Science Some Natural Phenomena Chapter Notes. There are many more useful educational material which the students can download in pdf format and use them for studies. Study material like concept maps, important and sure shot question banks, quick to learn flash cards, flow charts, mind maps, teacher notes, important formulas, past examinations question bank, important concepts taught by teachers. Students can download these useful educational material free and use them to get better marks in examinations.  Also refer to other worksheets for the same chapter and other subjects too. Use them for better understanding of the subjects.

Electrostatics: Frictional Electricity
Electrostatics is the study of electric charges at rest. Therefore, it is also called ‘static electricity’. The charges at rest are produced due to friction between two insulating bodies which are rubbed against each other. That is why electrostatics is also called ‘frictional electricity’.
We know that when a glass rod is rubbed with a piece of silk, the rod acquires the property of attracting small pieces of paper, leaves, cork or even dust particles towards it. The rod is said to be electrified or charged. Similarly, a comb is electrified on passing through dry hair. When we take off a nylon shirt, we find little sparking. An electric charge also develops on a sheet of paper moving through a printing press and so on.

The vast amount of charge in an object is usually hidden as the object contains equal amounts of positive charge and negative charge. With such an equal balance of charge, the object is said to be electrically neutral i.e. it contains no net charge.

If the positive and negative charges are not in balance, then there is a net charge. Thus an object is charged, if it has a charge imbalance or some net charge.

Atmospheric Electricity
The atmosphere of earth extends upto about 400 km above the earth’s surface. On the basis of distinct properties, the earth’s atmosphere is divided into four layers:
1. Troposphere 2. Stratosphere 3. Mesosphere 4. Ionosphere

Following are some of the important electrical properties of earth’s atmosphere.
1. Earth itself is good conductor of electricity.
2. The atmosphere near the surface of earth is a poor conductor of electricity. The conductivity increases, as we move up. Ionosphere is a very good conductor. This is primarily due to ionization of the molecules of air by charged cosmic ray particles having energies of the order of 1014 MeV. 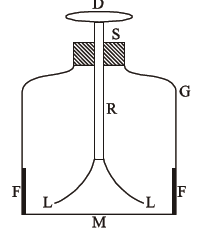 It is an instrument used for the detection of electric charge and measurement of potential difference. The essential parts of GLE are shown in figure. D is a metallic disc, R is a metal rod; S is insulating stopper; L, L are gold leaves; G is a glass bell jar; F, F are in foils. M is insulating base on which a metal foil is pasted. When a charged body is held in contact with the disc D, the gold leaves diverge. The divergence of leaves is a measure of potential of the charged body.

Properties of Charge
1. A charged body is that body which has either excess of electrons or deficiency of electrons. A body having excess of electrons is negatively charged and a body having deficiency of electrons is positively charged.
2. Like point charges repel each other, while unlike point charges attract each other. The magnitude of force of attraction or repulsion is given by Coulomb’s law.
3. In charging, the mass of a body changes. If electrons are removed from the body, the mass of the body will decrease and the body will become positively charged.
4. Charge is quantised.
5. A large number of experiments show that in an isolated system, total charge does not change with time.
6. Charge is invariant, charge is independent of frame or reference, charge on a body does not change whatever be its speed.
7. Accelerated charge radiates energy.
8. If charged body is brought near a neutral body, the charged body will attract opposite charge and repel similar charge present in the neutral body. In case of induction it is worth noting that. Induced charge can be lesser or equal to inducing charge (but never greater) and its maximum value is given by;
q´= -q[ 1 -1/K]  K is the dielectric constant of the material, for metals, K =¥ and so q´ = –q i.e., in metals induced charge is equal and opposite to inducing charge.

Coulomb’s law
If two point charges q1 and q2 are placed at a certain distance r, then the force of attraction or repulsion (F) between them depends as ,

r, being a pure ratio, has no units.

For example, r for water is 81

3. Coulomb’s law is applicable for point charges only.

5. The force is conservative, i.e, work done in moving a point charge once round a closed path under the action of Coulomb’s force is zero.

The mechanism of thunderstorm and lightning flashes is yet not well understood. However, the experimental observations lead us to the following facts: 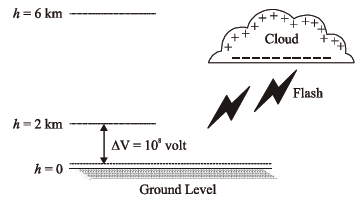 3. The total amount of negative charge at the bottom of the cloud = 20 coulomb. Earth is at a higher potential. The potential difference between earth and cloud bottom is  107 to 198V. Therefore, an electric field of strength (E = V/d)  104V/m is created, directed upwards as shown in figure.

4. Such high electric fields cause an ‘electric breakdown’ of the air i.e. the intervening air gets ionized and conducts charge from the cloud to earth in the form of a lightning flash. Each flash lasts for 2 × 10–3 sec, and deposits about 20 C of charge on earth.

5. After each lightning flash, cloud becomes charged again and is ready for the next flash. With 90 flashes per second all over the world, about 1800 coulomb of negative charge is pumped into earth per second. This balance the +1800 coulomb inflow of charge per second into the earth from the thunderstorm – free regions. Thus the steady state of earth and its atmosphere are maintained. 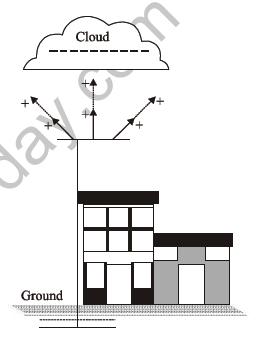 The Earth’s lithosphere is divided into about 20 parts called tectonic plates.These plates float over the hot magma below, and are therefore in relative motion to each other. When these plates collide and the rock at the joint is sufficiently slippery, the plates slide over each other, little by little. However, sometimes the rocks at the joints can interlock and get stuck, resisting pressure from within. For years, the forces pushing the plates build up until the strain can rip the two plates apart. The rocks crack and shift, sending shock waves of energy in all directions. When these waves reach the surface, they are felt as earthquakes. The point from which the earthquake waves originate is called the seismic focus. It lies within the crust of the earth. The point on the earth’s surface vertically above the focus is called the epicentre of the earthquake.,The intensity of the earthquake is greatest at the epicentre.
The boundaries of the tectonic plates are the zones where earthquakes are most likely to occur. These are known as seismic or fault zones. In India faulty zone at the boundary of the Indian plate and Eurasian plate passes through Kashmir, western and central Himalayas, the whole of North-East, Rann of Kachchh, Rajasthan and the Indo-Gangetic plain. These areas are therefore most prone to earthquakes. 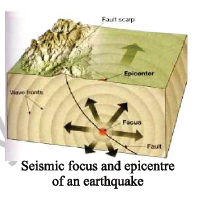 It is very difficulty to predict the occurrence of an earthquake, as it occurs suddenly. Violent earthquakes are often desructive. They cause serious damage to life and property. We can take the following precautions against earthquakes while building our houses. The following are some steps you should take if you are caught in an earthquake.

• If trapped in your home or a building take shelter under a table and do not move till the shaking stops. Protect your head with your arms. Avoid using lift.

• Do not stay near the windows, bookcase, mirrors, hanging pots, fans during or immediately after an earthquake.

• Leave your home or school building and move to open areas.

• Help others according to their needs.

1. Name the charged particles present inside an atom.

2. An insulator loses some electrons. What type of charge will be developed in the insulator and what will be its potential.

3. How can be charge induced in an uncharged object.

4. Write any three properties of charge.

5. A person coming out of a car touches the door get electric shock. How do you explain this fact.

6. What is a lightning conductor? How does it work.

7. Is there any charge in the atmosphere? If yes then where it is?

8. What are uses of a gold leaf electroscope?

10. What type of protection can be taken to avoid any damage caused by lightning.

11. A positively charged rod is brought closer to the head of an electroscope. What type of charge will be developed at its leaves.

12. Write different possible reasons for which clouds get charged.

5. The point at which the earthquake originates is known as
(A) Mentles (B) Seismic focus
(C) Surface wave (D) Body wave

6. Lightning is a process of
(A) Producing positive charges (B) Detecting negative charges
(C) Electric discharge (D) None of the above