Class 8 Science Reaching at the Age of Adolescence Exam Notes. Please refer to the examination notes which you can use for preparing and revising for exams. These notes will help you to revise the concepts quickly and get good marks.

The period of transition from childhood to adulthood is called adolescence.

The age at which the sex hormones and gamets begin to be produced and the boy and the girl become sexually matured, is called puberty. Generally boys

(2)Change in body shape : In girls hips become broader and the pelvic region widens. Deposition of fat takes place around the hips.In boys shoulders broaden and the body muscles grow more than that of the girls.

(3)Change in voice : At puberty the voice box or the larynx begins to grow. The larynx in boys is larger than that in girls. In boys, the voice becomes deep and harsh whereas girls have high pitched voice.

(5)Development of sex organs : In boys, the male sex organs like the testes and penis develop completely. In girls, the ovary enlarges and eggs begin to mature. Ovaries start releasing matured eggs. Only one egg is released per month.

Some of the secondary sexual characteristics that develop in girls and boys are as follows :

(1) Facial hairs such as beard and moustaches develop.

(2) Hairs develop under the arm pit, under chest and in the pubic regions.

(2) Hairs develop under arm pit and in the pubic regions.

(5) Deposition of fat around hips

These changes which occur at adolescence are controlled by hormones.

A group of endocrine glands which produces various hormones constitutes the endocrine system.

Hormones are chemical substances secreted by ductless glands in the body. These glands release hormones directly into the blood of person, and with the circulation of blood these hormones are carried to target sites.

◊ Example of Some Endocrines Glands Are :

Some Endocrine Glands and their functions 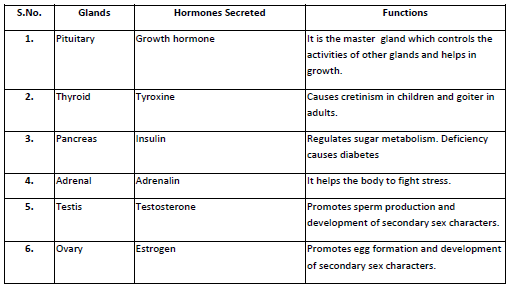 (1) Pituitary Gland : The pituitary gland is located just below the brain. It secretes growth hormone. Growth hormone controls the development of bones and muscles.

(2) Thyroid Gland : The thyroid glands is located in the throat region. It makes a hormone called thyroxine which contains iodine. The function of thyroxine hormone is to control the rate of metabolism, growth and respiration.

(3) Pancreas : It secretes insulin along with some other hormones. The function of insulin hormone is to control sugar metabolism in the body. Deficiency of insulin in the body causes a disease known as diabetes.

The beginning of the menstrual cycle (menarche) marks the onset of puberty (at the age of 12–13 years) in human females and it lasts upto 40–50 years (menopause) when the reproductive capacity of the female is arrested.

•  Menstrual phase (Bleeding phase) : This phase is also called the stage of menstrual flow and lasts about 4 days. During this phase, uterus endometrial lining is sloughed off and bleeding also takes place due to rupture of blood vessels.

•Proliferactive phase : This phase is also called follicular phase or stage of repair and proliferation. This is mainly influenced by estrogens.

• Ovulatory phase : During this phase, no conspicuous changes occur in the uterus endometrium. It occurs midway between two menstrual periods.

•Secretory phase : This phase is under the control of progesterone and estrogens. If pregancy does not retain it is followed by menstruation and so it is called premenstrual phase. This phase lests for about 13
to 14 days. 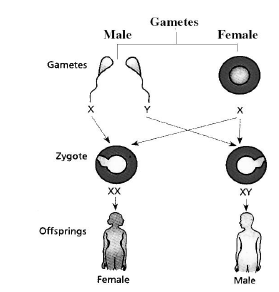 From the above it is clear that all children will inherit an X chromosome from their mother regardless of whether they are boys or girls. Thus the sex of the children will be determined by what they inherit from their father. A child inheriting an X chromosome from the father will be a girl and the one who inherits Y from the father will be a boy. In our society it is often the mother who is blamed for giving birth to a girl child which is incorrect scientifically and medically.

Please click on below link to download pdf file for Class 8 Science Reaching at the Age of Adolescence Exam Notes.