CBSE Class 8 Science Stars and the Solar System Chapter Notes. There are many more useful educational material which the students can download in pdf format and use them for studies. Study material like concept maps, important and sure shot question banks, quick to learn flash cards, flow charts, mind maps, teacher notes, important formulas, past examinations question bank, important concepts taught by teachers. Students can download these useful educational material free and use them to get better marks in examinations.  Also refer to other worksheets for the same chapter and other subjects too. Use them for better understanding of the subjects.

Stars and the Solar System

1. Universe is a vast collection of stars, planets, nebulae, galaxies, intergalactic matter and everything that exists in them. It is believed to be formed 15 billion years ago from a huge explosion called ‘Big Bang’.
2. To measure distances on astronomical scale, the unit ‘light year’ is used. It is the distance travelled by light in one year. 1 1y = 9.46× 1012 km.
3. Stars are self-luminous astronomical bodies which produce energy from nuclear fusion reactions. They form from a large collection of gases, called a nebula.
4. A galaxy is a group of billions of stars and other celestial bodies. Galaxies exist in different shapes such as circular, elliptical, ring and irregular. They usually revolve around themselves and move away from each other at tremendous speeds.
5. A group of stars which seem to form a pattern is called a constellation. Ex: Big bear, Orion etc.
6. Constellations: The group of stars which appears to form some recognizable shape or pattern is known as constellation. Each constellation has been given a name signifying an animal, a human being or some other object which appears to resemble. All the constellations appear to move in the sky from east to west. This is because the earth, rotates on its axis from west to east. Some of the important constellations are: 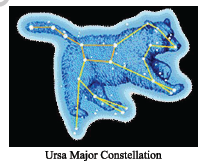 b) The Ursa Major constellation consists of seven bright stars which are arranged in a pattern resembling some what a big bear.

c) The Ursa Major constellation is visible during summer season.

d) We can locate the position of Pole Star in the night sky with the help of Ursa Major constellation.

e) Imagine a straight line through the two pointer stars of the Ursa major constellation. This imaginary line towards north direction in the sky is used
to locate a bright star called the pole star.

b) The arrangement of stars in Orion constellation is supposed to resemble a ‘hunter’ in the Kneeling position. Star marked 1 in the figure
represents the head of the hunter.

c) The star marked 2 and 3 from the shoulder. Start 7 and 8 are imagined to be feet of the hunter. The three stars in the middle marked 4, 5 and 6 represent the belt of the hunter.

d) The Orion constellation is visible in the sky during the winter season.

e) The brightest star in the night sky called ‘Sirius’ is located close to the Orion constellation. 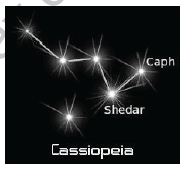 a) Cassiopeia is another prominent constellation in the northern sky. It consists of 5 main stars.

c) Cassiopeia constellation is visible during winter in early part of the night.

7. Sun along with its nine planets, their satellites, asteroids and comets are together named as solar system.

8. Mercury: i) Mercury is the closest planet to the sun. It is the smallest in size compared to other planets of solar system.

ii) It is very near to the sun, it can be seen from earth only occasionally after sunset and before sunrise. It is so because Mercury is most of the time
hidden by the glare of sun.

iii) Mercury’s orbit is elliptical or more likely oval. Since it is closest to the sun, it revolves around the sun fastest.
iv) It has no natural satellite.

Venus: i) Venus is the second planet in terms of the distance from the sun.
ii) Venus is surrounded by thick clouds, so it reflects the light of sun from its surface. So it is the brightest planet of solar system.

iii) Venus has thick and dense atmosphere which mainly contains carbon dioxide. So it traps all the heat rays from the sun (due to green-house effect). The nearness of the sun alongwith its heating caused by greenhouse effect makes venus the hottest planet of the solar system.

Earth: i) Our own planet earth is the third planet of solar system and is the only planet in the solar system on which life is known to exist.

ii) The various environmental conditions available on earth which are responsible for existence and continuation of life on earth are as follows:

a) The Earth has an atmosphere which contains many gases including oxygen and carbon dioxide.

c) The Earth has a suitable temperature range for the existence of life.

d) The Earth has a protective blanket of ozone layer that absorbs extremely harmful ultraviolet radiations coming from the Sun.

iii) The earth rotates about an imaginary axis that passes through it poles and is titled at an angle of 23½° vertically. This tilt of earth on its axis gives rise to
change of seasons.

iv) Earth has only one natural satellite the moon.

i) Mars is seen in the sky as aMars: reddish planet.

ii) Off all the planets, Mars is most like the earth

iii) Mars has a very thin atmosphere of traces of carbon dioxide, nitrogen, hydrogen and oxygen.

iv) It is a cold planet.

i) Jupiter is the biggest planet of the solar system.

ii) The diameter of Jupiter is 11 times the diameter of the Earth and its mass is about 318 times that of the earth. Jupiter is so large that about 1300 Earths can be placed inside this giant planet.

iii) Jupiter is made mainly of hydrogen and helium. Life cannot exist in Jupiter because it is a cold planet also it has poisonous gases (like methane and ammonia) in its atmosphere.

i) Saturn is the second largest planet of solar system.

ii) The most distinguishing feature of Saturn is the system of colourful rings which surround it.

iii) Saturn is the least dense among all the planet of the solar system.

i) Uranus is third biggest planet of the solar system.

i) Neptune is the eighth planet of solar system.

ii) It is an extremely cold planet.

9. Because of earth like internal structure Mercury, Venus, Earth and Mars are called terrestrial planets. And since Jupiter, Uranus, Saturn and Neptune are made up of mainly gases, they are called gas or Jovian planets.

10. Asteroids are irregular rocky bodies that revolve around the sun between the orbits of Mars and Jupiter.

11. A comet is a small body of rocks, ice and gases that revolves around the sun in a highly eccentric elliptical orbit.

Energy released when some changes takes place in the nucleus of an atom is called Nuclear Energy. During the phenomenon of radioactivity heavy atom gets split into a number of light atoms, the total mass of the products is less than the mass of the original atom. Thus there is a loss of mass which gets converted into energy. The energy emitted in this process is known as Nuclear Energy Units. Energy of particles and radiation emitted are measured in units knows as electron volts (eV).
1 eV = 1.602 × 10–19 Joules

The energy stored in the nucleus of an atom can be obtained by either of the two processes. (i) Nuclear fission (ii) Nuclear fusion)

Nuclear Fission: A process of spontaneous breaking of a heavy nucleus (like that of uranium) into two medium sized nuclei with the liberation of energy is called nuclear fission. Nuclear fission reaction is carried out by bombarding the heavy nucleus with low-energy neutrons. Neutron is a neutral particle. When U235 is bombarded with neutrons, it causes uranium
nucleus to disintegrate into small nuclei of lighter elements. The energy of neutrons that produces fission is low and these neutrons are called thermal neutrons or low energy neutrons. 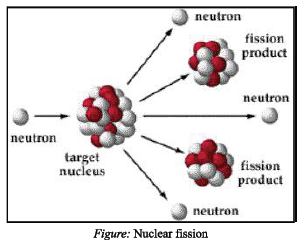 Reaction: There are a number of ways in which uranium nucleus can split up and give different fission products. Each time a uranium nucleus breaks, it releases 2 to 3 neutrons. It also depends upon the projectile and energy of the projectile, which can produce fission. Common fission reaction of uranium 235 isotope ( 235 92 U ) with thermal neutrons is as

In this reaction tremendous amount of energy is released. This energy is due the mass defect, i.e. the difference is mass m between the original nucleus and the product nuclei. The loss of mass △m gets converted into energy E according to Einstein mass energy equation

where c is the speed of light in vacuum. When 92U235 is bombarded by a thermal neutron each atom of uranium-235 releases = 200 MeV of energy and 2-3 neutrons.
Comparison of Energy Produced by Nuclear Fission with Coal

During the process of nuclear fission one atom of uranium produces - 200 MeV of energy which is 10 million times of the energy produced by the combustion of an atom of carbon from coal.

Nuclear Fission Reaction is
a Chain Reaction: We have seen that during the fission of uranium atom, 2-3 neutrons are produced. Each neutron possess ~2 MeV energy per atom, which is much more than the
energy of thermal neutrons that started the fission. The energies of these neutrons can be reduced to thermal neutron energy (~0.025 MeV) by surrounding the fissile
materials with special substance 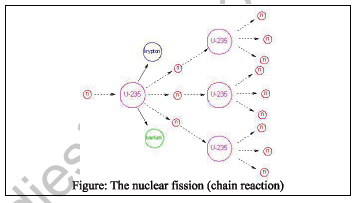 known as moderators. The moderator slows down the speed of fast moving neutron. Now each one of the neutron released causes further fission reaction and releases more energy and more neutrons. This process continues and ~1024 fission reaction takes place in about one millionth of a second. As a result tremendous amount of energy is released in a fraction of a second. This reaction is called the chain reaction. A reaction in which the particle which starts the reaction is also produced back during the course of reaction and reaction continues to take place is called a chain reaction.

In a nuclear fission reaction a heavy nucleus splits into two light weight nuclei and energy is released. Conversely when two light weight nuclei combine or fuse to form a big nucleus, it also results in the releasesof tremendous amount of energy. This process is called nuclear fusion. This is another method to generate energy from nucleus of an atom. For example.
When two hydrogen nuclei or hydrogen isotopes combine a nucleus of helium is produced: