CBSE Class 8 Science Current Electricity and its Effects Chapter Notes. There are many more useful educational material which the students can download in pdf format and use them for studies. Study material like concept maps, important and sure shot question banks, quick to learn flash cards, flow charts, mind maps, teacher notes, important formulas, past examinations question bank, important concepts taught by teachers. Students can download these useful educational material free and use them to get better marks in examinations.  Also refer to other worksheets for the same chapter and other subjects too. Use them for better understanding of the subjects.

Current Electricity and its Effects

Ohm’s Law
Ohm’s Law gives a relationship between current and potential difference. Ohm’s law states that at constant temperature, the current flowing through a conductor is directly proportional to the potential difference across its ends. Thus, according to Ohm’s law,

A = cross-sectional area of the condcutor
or
R =r l/A ....(iii)
Where, r (rho) is a constant known as resistivity (or specific resistance) of the material of the conductor. The SI unit of resistivity is ohm-metre (W m).


Now in relation (iii), if we put A = 1, and l = 1, we get r = R
Thus, the resistivity of material of conductor is defined as the resistance of the conductor of unit length and unit area of cross-section.


Note: The resistivity of a substance does not depend on its length or thickness. It depends only on the nature and temperature of the substance.


Electrical resistivities of some substances at 20°C are given in the following table: 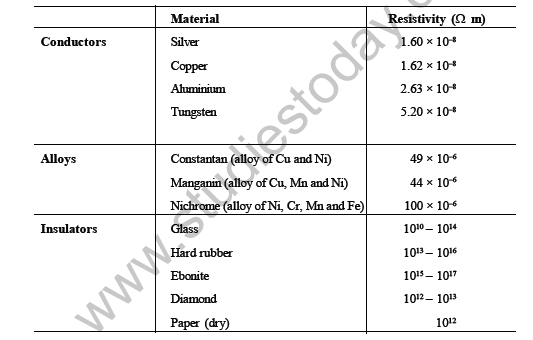 From the above table we find that

For example, copper and aluminium metals are generally used for electrical transmission lines. Tungsten metal is used almost exclusively for filaments of electric bulbs. This is because tungsten has high melting point and does not oxidise (or burn) easily at high temperatures.
The resistivity of alloys is generally higher than that of its constituent metals. Also alloys do not oxide readily at high temperature

The resistivity of alloys is generally higher than that of its constituent metals. Also alloys do not oxide readily at high temperature.

Note: The resistivity of semi-conductors like silicon and germanium is in between those of conductors and insulators and decreases on increasing the temperature.

Combination of Resistances (or Resistors)

There are two methods of joining the resistors together (i) in series and (ii) in parallel.

When two (or more) resistances are connected end to end consecutively, they are said to be connected in series.

Let three resistances R1, R2 and R3 are connected in series which is shown in the figure.

Thus, we conclude that when several resistors are joined in series, the resistance of the combination Rs

equals to the sum of their individual resistances.

When two (or more) resistances are connected between the same two points, they are said to be connected in parallel.

Let us consider the arrangement of three resistors joined in parallel as shown in the figure.

Note: When a number of resistances are connected in parallel, then their combined or equivalent resistance is alwasys less than the smallest individual resistance.

Thus, the power is said to be 1 watt when an electrical appliance consumes electrical energy at the rate of

Other units of electric power used for commercial purposes are kilowatt and megawatt.

As we known that 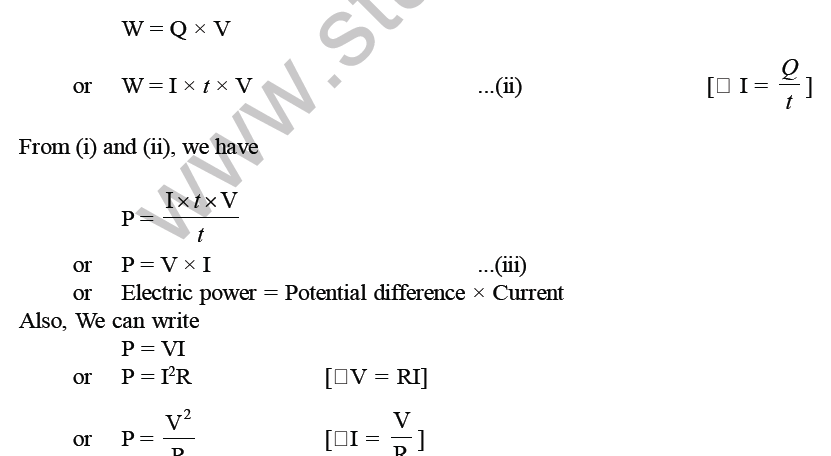 Thus, the power consumed by an electrical appliance is said to be 1 watt when 1 ampere of current is operated at a potential difference of 1 volt.

Now, according to law of conservation of energy,

For commercial purpose we use a bigger unit of electrical energy which is called kilowatt-hour (kWh).

One kilowatt-hour is the amount of electrical energy consumed when an electrical appliance having a power rating of 1 kilowatt is used for 1 hour.

Whenever the electric current is passed through a metallic conductor, it becomes hot after some time. This indicates that the electrical energy is being converted into heat energy. This effect is known as heating effect of current.

Cause of Heating Effect of Current

Heat Produced in a Conductor

Consider a conductor AB connected to cell as shown in the figure. Let V be the potential difference applied across the ends of AB and I be the current flowing through AB in time t.

Now, by definition of potential difference