Class 8 Science Conservation of Plants and Animals Exam Notes. Please refer to the examination notes which you can use for preparing and revising for exams. These notes will help you to revise the concepts quickly and get good marks.

•Variety of all living organisms present on earth is called 'Biodiversity'

•Maximum biodiversity occurs in a forest. Forests are home of several kinds of plants, animals & microorganisms.

Large scale cutting of trees is called deforestation. It results in loss of habitats of several plants, animals and microorganism living in that area.

Trees are cut in the forest on a large scale to clear the land for some useful purposes listed below :

1.Procuring land for agricultural use.

3.Procuring land for setting up industries and mining.

4. Procuring land for setting up industries and mining

The consequences of deforestation on the environment are very serious. Some of the harmful effects are given below

Water cycle gets disrupted due to deforestation. The area gets less rainfall which may create drought-like situations.

The top soil is easily carried away by wind or water in the absence of tree cover, thus increases soil erosion. It is called desertification

Deforestation disturbs the balance between carbon dioxide (CO2) and oxygen (O2) level in the atmosphere. It results in increase in the concentration of CO2 which leads to global warming.

Deforestation brings about change in climate and increases pollution level on the earth.

Cutting of trees on a large scale destroys the natural habitat of several plants, animals and microorganisms.

Clearing of trees from forests results in shortage of forest products.

In the absence of tree cover, rainwater cannot infiltrate into the ground to charge the aquifer. It leads to the lowering of ground water level in the absence of replenishment.

The following steps should be undertaken to conserve them

• Massive afforestation work should be undertaken to cover large areas of land with appropriate trees.

• Falling of trees in the forest should be banned.

• Every piece of barren land should be planted with trees.

• Forest fire must be prevented.

• Forest nurseries should be established on a large scale

Plants, animals and microorganisms which live in nature or are present in their wild natural habitat constitute wildlife.

◊ Causes of Extinction and Depletion of Wildlife :

Several species have become extinct due to their hunting by man for food, pleasure and animal products.

Man has destroyed the natural habitats of wildlife for his settlement, cropping, plantation, mining and raising of dams, overgrazing by domestic animals, etc.
• Introduction of Exotic Species :

Man not only destroys the natural habitat, but also sometimes changes the structure of the biotic community of a place by introducing exotic species of his interest. Such species compete with the native species for food and spaces and may threaten the later with extinction.
• Forest Fires :

Setting the forst on fire not only kills the useful animals but also causes large scale destruction of the plant life.

Several animals and plants are valuable sources of food and other materials. Fish, Prawns and crabs constitute an important part of human food. Man has, however, over-exploited these resources. Overfishing in sea is causing a grave situation and the picture is not encouraging with respect to fresh water fishing.
• International Trade of Animal Products :

The legal or illegal export or plant and animal products from the developing countries to the affluent countries is an important international trade and has brought several animal and plant species to extinction.
• Legal lapse :

The failure of enforecement of the existing lawas of wild life management is yet another reason for the rapid depletion of wildlife. 
• Human Ignorance :

Man is mainly responsible for depletion and extinction of wildlife on the earth. This is largely due to ignorance of the common man regarding the value of wildlife and the probable consequences of the disappearance of wildlife to man himself. 

In a biosphere reserve, you find some animals and plants which normally you may not find in any other area. They constitute its flora and fauna.

• The different types of plants belonging to that area are termed flora. For example sal, teak, mango, jamun, silver ferns and creepers of that area constitute the flora of the area.

• Besides creating protected areas, sometimes special breeding programmes are carried out to increase the number of a particular species. For example, breeding of crocodiles in chennai (Madras crocodile trust bank) has been able to produce more than 8000 crocodiles from just 10 crocodiles.

Because of large-scale habitat destruction large number of plants and animals have disappeared and become extinct and many other are waiting to disappear. Before we move further, let us try to know the categories under which these animals are placed. The International Union of Conservation of Nature and Natural Resources (IUCN) have classified the rare animals on the basis of

• Present and past distribution

• Decline in the number of populations in cource of time.

• Abundance and quality of natural habitats

• Biological and potential value of the species

• Extinct : A plant or animal species which once existed and flourished on the earth, but got exterminated and can no longer be seen on earth.

• Endangered : Any species in danger of extinction and whose survival is unlikely if the causal factors continue operating is called endangered species.

• Vulnerable : The species which are likely to move into the endangered category in the near future, if the causal factors continue operating are called vulnerable.

• Rare : Species with small population that are not at present endangered but are at risk of becoming so because of their smaller population.

• Threatened : Species belonging to any of the categories–endangered, vulnerable or rare are termed threatened. The terms defined above have been provided by IUCN–International Union of Conservation of Nature and Nature Resources. IUCN has listed the threatened species of plants and
animals in a book called the ‘Red data book’’ 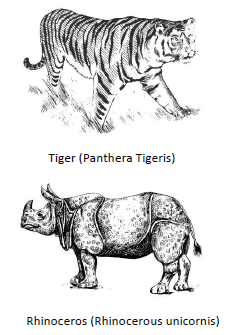 • A national park is characterized by an area reserved for the betterment of wildlife where foresting, grassing or cultivation is prohibited. It protects the flora and fauna of the reserved area. Private ownership is not allowed in a national park.
• In all, these are 97 national parks in India. 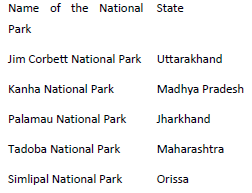 • A wildlife sanctuary is aimed at protecting the wild animals.

• In a wildlife sanctuary, cutting of trees for timber and other forest products is permitted to private operators with specific instructions to ensure that the well being of wild animals does not suffers.

A biosphere reserve is designed to provide protection to the wild flora and fauna, the domesticated animals and plants, as well as to the traditional life styles of the tribals of the area

• Zoos are places where animals and birds are protected by keeping them in special cages or enclosures for public exhibition. the animals are fed and cared regularly by zoo authorities.

• It is a source book which keeps a record of all endangered animal and plants. Separate data books for plants, animals and other different species are being maintained.

• Migration is a regular periodic two way movement of birds and some other animals from their place of residence to some other place along well defined routes. It is usually linked to seasonal factors such as increase or decrease in day lengths, in springs and autumn etc.

• The national forest policy framed in 1952 by government of India aimed to cover one third of total land area of the country under forests.

• In 1980, the national policy was revised and named as Forest Conservation Act. This act aimed at preservation and conservation of national forests and meeting the basic needs of the people

Please click on below link to download pdf file for Class 8 Science Conservation of Plants and Animals Exam Notes.