CBSE Class 8 Science Sound Chapter Notes. There are many more useful educational material which the students can download in pdf format and use them for studies. Study material like concept maps, important and sure shot question banks, quick to learn flash cards, flow charts, mind maps, teacher notes, important formulas, past examinations question bank, important concepts taught by teachers. Students can download these useful educational material free and use them to get better marks in examinations.  Also refer to other worksheets for the same chapter and other subjects too. Use them for better understanding of the subjects.

Wave Motion
Wave motion is a vibratory disturbance travelling through a medium in which energy is transferred from one point to another without there being a direct contact between the two points.
Any motion which repeats itself after a fixed period (or interval) of time is known as periodic motion. The motion of earth around the sun, the motion of the hands of a clock, etc are examples of periodic motion. The periodic motion in which a body moves back and forth continuously is called vibratory (or oscillatory) motion.
The most familiar types of oscillatory motion are the motion of a swing and the motion of a simple pendulum. All the vibratory motions have a common feature that they are repetitive and periodic about a mean position. We will now discuss some important definition connected with wave motion.

Amplitude: The amplitude of a wave is the maximum displacement of the particle in a medium on either side of the mean position. It is usually represented by the letter A.

Wavelength: Wavelength of a wave is the length which is equal to the distance travelled by the wave during the time, any one particle of the medium completes one vibration about its mean position. It is usually represented by l(lambda). Its SI unit is metre (m).

Frequency: Frequency gives us an idea about how frequently an event occurs. Thus, the number of complete oscillations per unit time is called the frequency of the wave. It is usually represented by the letter v (nu). Its SI unit is hertz (Hz).

\ time period and frequency are reciprocal of each other.

Production of Sound: Sound is produced when an object vibrates (moves back and forth rapidly). In other words, sound is produced by vibrating objects. Thus, whenever we hear a sound, then some material must be vibrating to produce that sound. When an object vibrates to produce sound, a certain amount of energy which travels in the form of sound waves. For examples, the buzzing sound of bees and mosquitoes is produced by the vibration of their wings, the sound in a sitar, veena or guitar is produced by the vibrations of stretched strings. The sound of our voice is produced due to vibrations in the vocal cords. The sound of school bell is produced by the vibrations of an iron or brass plate when it is hit by a hammer. In most of these cases, i.e., sound producing objects vibrate so rapidly that we cannot see its vibrations with our naked eyes.
Propagation of Sound: When an object vibrates, then the air layers around it also start vibrating exactly in the same way and carry sound waves from the sound producing object to our ears. The matter or substance through which sound is transmitted is called a medium. This medium can be solid, liquid or gas. 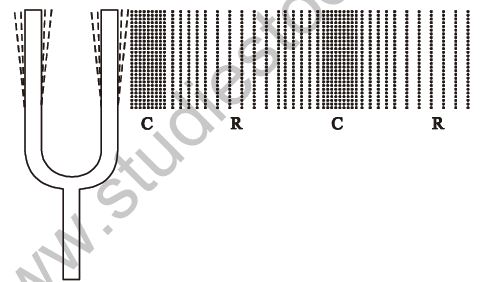 A vibrating object creating a series of compressions (C) and rarefactions (R) in the medium.

Air is the most common medium through which sound travels. When a vibrating object moves forward, It pushes and compresses the air in front of it, creating a region of high pressure called compression (C). When the vibrating object moves backwards it creates a low pressure region called rarefaction (R). As the object moves back and forth rapidly, a series of compressions and rarefactions is created in the air. These makes the sound wave to propagate through the medium.
Note: Sound needs a material medium like solid, liquid or gas to travel but it cannot travel through vacuum (or empty space), because sound needs material medium for its propagation.

Transverse Waves
For transverse waves the displacement of the medium is perpendicular to the direction of propagation of the wave. 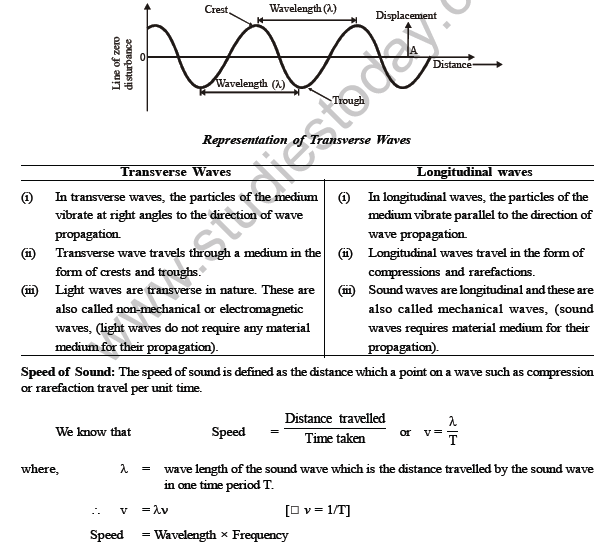 The Race between Sound and Light: The speed of sound in air is about 344 ms–1 and speed of light in air is 3 × 108 ms–1. So it is clear that speed of light is very greater as compared to speed of sound. For this reason, the sound of a thunder is heard a little later than the flash of lightning seen. We can also observe that in the game of cricket, the ball is seen to hit the bat first the sound of hiting is heard a little later.

Characteristics of Sound Waves
Intensity or Loudness : Intensity of sound is defined as the amount of sound energy passing per unit time per unit area around a point. Intensity is a purely physical quantity and can be measured easily. Its SI unit is watt m–2.
Loudness is a measure of the response of the ear to the sound. Thus the sensation produced in the ear which enables us to distinguish between a loud and a faint sound is called loudness. It is measured in terms of decibels, (dB) a unit named after Graham Bell. Loudness depends upon (i) Intensity of sound (ii) Sensitiveness of the ear. 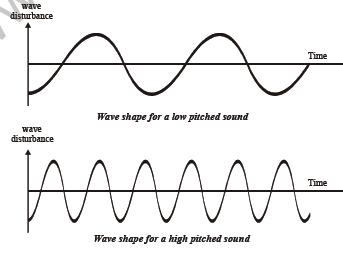 Quality or Timbre: The quality or timber is that characteristic of sound which enables us to distinguish one sound from the other having same pitch and intensity. It depends upon the waveform of the second.
For example, we can recognise our friends from their voices on the basis of the quality of their sound.
Note: The sound which is more pleasant is said to be of a rich quality. A sound of single frequency is called a tone. The sound which is produced due to a mixture of several frequencies is called a note. Noise is unpleasant to the ear. 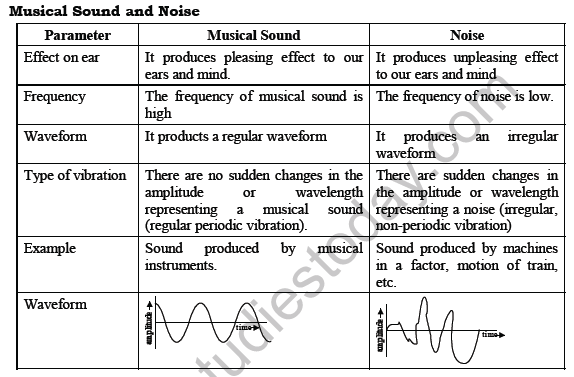 Reflection of Sound
Sound gets reflected from the surface of a solid or liquid in the same way as light and follows the same laws of reflection. For reflection of sound, however, does not require a smooth and shining surface like that of a mirror. Sound can be reflected from any hard surface, whether smooth or rough.
Echo: If we stand in one side of a big empty hall and shout or clap, we will hear the same sound again a little while later. This sound which we hear is called an echo. This happens because the sound that we shout or clap is reflected from the walls of the hall and this reflected sound forms the echo. An echo is simply a eflected sound.
To hear a distinct echo, the time interval between the original sound and the reflected sound must be at least 0.1 s. Now, knowing the minimum time interval required for an echo to be heard, and the speed of sound in air, we can calculate the minimum distance from a sound reflecting surface to hear an echo.
We know that,
Speed of sound in air at 22°C= 344 m/s
Time taken = 0.1 s
Speed = Distance travelled / Time taken