Class 8 Science Microorganisms Exam Notes. Please refer to the examination notes which you can use for preparing and revising for exams. These notes will help you to revise the concepts quickly and get good marks.

The organisms which are too small to be seen by the naked eyes & can be seen only through a microscope are called microorganisms.

Microorganisms are present everywhere in air, soil, water, food stuffs, sewage, waste as well as inside of any living bodies. The maximum number of microbes are found in natural substrate which are  rich in organic food, and have a suitable temperature and moisture for their growth and multiplication. An important fact about these microorganisms is that they are strong. They can survive extreme conditions of temperature and dryness by forming a cyst, which is a hard outer coat around their bodies.

Microorganisms are present in the air, water, food and even inside our bodies. While a majority of the microbes are harmless, some of them have the capability of causing dangerous diseases.

Bacteria (singular: bacterium) are single-celled organisms that vary in shape and size. Some bacteria are round or oval (coccus), others are rod-shaped (bacillus) or spiral. Some bacteria are autotrophic as they contain chlorophyll, but most of them are heterotrophic, showing saprophytic or parasitic mode of nutrition.

• Bacteria (singular: bacterium) are single-celled organisms that vary in shape and size. Some bacteria are round or oval (coccus), others are rod-shaped (bacillus) or spiral. Some bacteria are autotrophic as they contain chlorophyll, but most of them are heterotrophic, showing saprophytic or parasitic mode of nutrition. 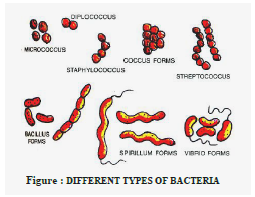 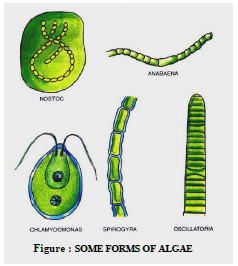 • Fungi (singular: fungus) are a group of plant-like organisms exhibiting heterophic (saprophytic or parasitic) nutrition. They are commonly found on bread, leather, cotton, paper, etc. Fungi grow vigorously in damp, warm, dark places, Yeast, moulds and mushrooms are forms of fungi. Yeast is commonly used for baking bread, cakes, etc. The yeast ferments sugar present in the wheat and converts it to carbon dioxide and alcohol. 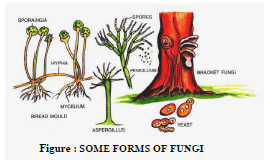 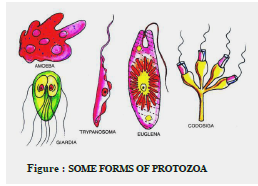 • A virus is a microorganism which exhibits characteristics of living as well as non-living thing. Viruses exhibit a variety of shapes, having simple structure. Reproducing only inside a living organism, viruses can cause many diseases. 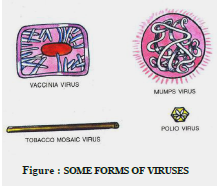 (i) Antibiotics : Many well known antibiotics such as streptomycin, aureomycin and chloromycin are obtained from bacteria.

(ii) Nitrification : The protein confined in dead bodies of animals and plants is converted into ammonia by ammonifying bacteria. This process is known as ammonification. This ammonia is converted into nitrites by bacteria of the nitrosomonas group.

(iii) Nitrogen Fixation : Some of the soil bacteria like Azotobacter, Clostridium and symbiotic bacteria (Rhizobium found in root nodules of leguminous plants) are capable of fixing free atmospheric nitrogen into nitrates. This nitrates are used by green plants to produce proteins.

(i) Lactobacillus bacteria help in the formation of milk products such as curd and cheese.

(ii) Some bacteria are also used in the preparation of industrial products such as lactic acid, acetone, alcohol etc.

(i) Brewery and Bakery : The wine (brewery) and bread (bakery) industries are the two most important industries which make use of the fungus yeast. Both these industries are based on fermentation activity of yeast.

(ii) Vitamins : Yeast is an important source of vitamin B-complex.

Fermentation properties of several fungi are utilized for the manufacture of oxalic acid, citric acid, etc.

• Fungi decompose the dead bodies of plants, animals and their waste products.

(i) Some species of fungi are edible. They are cooked like vegetables or used in pulao or prepared as soups. Some common edible fungi are Morchella, Agaricus, Ramaria, Clavaria and Plurotus.

(ii) Yeast is also used in the preparation of idli and dosa from a mixture of powdered rice and dal.

Algae play an important role in medicine, agriculture, industry and as food.

(i) Algal Products : Agar and algin are obtained from red and brown algae respectively. These are used in the preparation of medicines, food and cosmetics.

The brown algae are the most important sources of sodium, potassium and iodine. Iodine is obtained from an alga called kelp.

(i) As Manure : Many of the sea weeds are directly added to agricultural fields as manure because they are rich in nitrogen and potassium.

(ii) Nitrogen Fixation : Some blue-green algae like Nostoc and Anabaena are important in the fixation of atmospheric nitrogen in soils.

(iii) Food : The red alga Porphyra is used directly as food in China and Japan.

(iv) Fodder : Some sea weeds such as Laminaria are used as fodder for sheep and cattle.

(i) Some free-living protozoa form an important link in an aquatic food chain. They feed on algae and are, in turn, eaten by bigger animals.

(ii) Some forms of protozoa help in the final degratdation of waste and sewage.

Disease carrying germs are carried by other organisms. For e.g. The pathogen for malaria is carried by a mosquito (the femal Anopheles, mosquito ) and enters the body when the mosquito bites. Here, the mosquito acts as a carried while the human is the host. Since mosquitoes are capable of carrying and spreading many diseases like malaria, dengue, etc. It is very important to control the reproduction or breeding of mosquitoes. Since mosquitoes
breed on water, we must ensure that there is no standing rain water or water in coolers, etc. near our homes.

What do you do with left-over food after dinner ? It is kept in the fridge. If left outside, the food can get spoiled, and can cause food poisoning if eaten. We have seen how dangerous microorganisms can be. That is why it is very important for us to be careful about food quality and preservation. Different methods used to prevent spoilage of food, by limiting the growth of microbes are :

• Food is kept at low temperature to reduce the rate of reproduction of the microorganisms and prevent food spoilage.

• Food items are dried in the sun or by spraying or freezing. This process is commonly used for preserving fruits, although some nutrients are lost by drying.

◊ Addition of salt or sugar :

• Microbes need water for growth. By adding salt or sugar, water is made unavailable, thereby controlling microbial growth. Pickels and jams are preserved food items (fruits and vegetables) and can be kept for many months.

• Frozen food is very popular nowadays as it has greater shelf life, without much loss of nutrients. Reduction in temperature and unavailability of water help to limit microbes.

Meat products are preserved by the process of smoking which uses drying technique as well as some substances from smoke.

• Pasteurization is a process by which microorganisms are destroyed by high temperature and sudden cooling. Milk is heated to around 70ºC and then suddenly cooled. It is commonly used for milk, since other food items can lose heat- sensitive nutrients.

• Homogenization is the process of passing a substance (usually milk) under high pressure through thin tubes, which reduces the tendency of creaming of fat.

• Ionizing radiations are used to destroy microorganisms without affecting heat-sensitive nutrients. This process is commonly used for preservation of mushrooms, strawberries, potatoes, etc.

The process of converting atmospheric nitrogen into compounds of nitrogen, mainly nitrates, which can be easily used by plants is called nitrogen fixation. It can be fixed in two ways.

• In nature nitrogen of the atmosphere can be fixed by three methods.

Fixation of Nitrogen by Bacteria :

• The root nodules of certain legnminous plants contain nitrogen fixing bacteria called Rhizobium. The bacteria can directly fix nitrogen gas to nitrogen compounds which can utilised by the plants.

Fixation of Nitrogen by Lighting :

• In this method the atmospheric nitrogen is made to combine with hydrogen gas to form ammonia (Haber's process). This ammonia can be oxidized to make nitrates or react with acid to form ammonium salts. The nitrates as well as 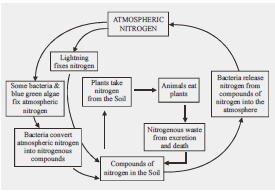 • The circulation of nitrogen through the living and
non-living components of the biosphere (air, soil, water, plants and animals) is called nitrogen cycle. Nitrogen cycle maintain the percentage of nitrogen in the atomosphere more or less at a constant

• The atomspheric nitrogen is fixed into nitrogen compounds like nitrates by Rhizobium bacteria, blue-green algae, lightning or industrial method.

• The plants absorb nitrate compounds from the soil and water and convert them into plant proteins.

• The plants are eaten up by animals and thus plant protiens are used for making animal proteins.

• Ammonia thus formed is converted first into nitrites and then into nitrates by the action of Nitrosomonas and
Nitrobacter bacteria respectively. The process is called nitrification.

•The soil contians denirifying bacteria called Pseudomonas which convert nitrate form of nitrogen into free nitrogen which goes back into the atmosphere. The process is called denitrification.