Class 8 Science Pollution of Air and Water Exam Notes. Please refer to the examination notes which you can use for preparing and revising for exams. These notes will help you to revise the concepts quickly and get good marks.

11.Purification of Water Air & water are a most important natural resources.

The contamination of air by the addition of unwanted & harmful substances, known as a air pollution.

The substances which contaminate the air are called air pollutant.

(2) Particulate : Pollutants that are in the form of tiny particles are called particulate pollutant. They may be solid or liquid. Particulate matter usually remains suspended in the atmosphere and is therefore also termed as SUSPENDED PARTICULATE MATTER (SPM).

(1) The blowing of strong winds during dust storms puts dust particles into the air and pollute it.

(2) Forest fires release soot (carbon particles) and ash into the air and pollute the air. 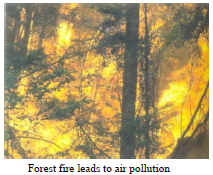 (3) Volcanic eruption releases various gases and ash into the atmosphere. 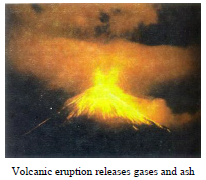 (4) Decay of organic matter releases ammonia gas into the air. 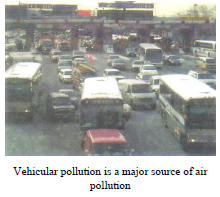 Vehicular pollution is a major source of air pollution 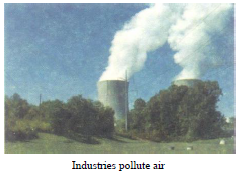 (iv) Fertilisers and Pesticides : Use of fertilizers and pesticides in agriculture pollutes the air.

(2) Carbon Monoxide Poisoning : Carbon monoxide is a poisonous gas. This combines with the hemoglobin of our blood and forms a stable compound called carboxy-haemoglobin. This leads to respiratory problems. It causes suffocation and may even cause death. This is called carbon monoxide poisoning.

(3) Depletion of Ozone : Chlorofluorocarbon is a harmful chemical which is widely used in industries. While using, it escapes into the atmosphere and destroys ozone. Ozone gas present in the upper atmosphere absorbs harmful ultraviolet radiations coming from the sun and protects plants and animals on the earth. The ultraviolet radiations cause skin cancer, cataract and damage immune system of our body.

(4) Greenhouse Effect : The burning of fossil fuels like coal, and petroleum products in homes, transport and industry releases a lot of carbon dioxide gas into the air.

This process of trapping of radiated heat due to increased concentration of carbon dioxide in the air is called greenhouse effect. It leads to increased heating of earth. The phenomenon of rise in temperature of the earth's surface is called global warming.

(5) Acid Rain : Atmospheric air is polluted due to high concentration of gases like carbon dioxide, sulphur dioxide, oxides of nitrogen, etc. These gases get dissolved in rainwater and produce what is called. acid rain.

(1) Acid rain is very corrosive and harmful for both living and non-living things.

(2) It gradually destroys living tissues, eats up cement, limestone and marble of buildings and corrodes steel and other metals.

Some of the methods for controlling air pollution are given below :

(1) Tall chimneys should be installed in factories to reduce air pollution on the ground level.

(2) Better designed fuel burning equipment should be used in homes and industries so that fuel is burnt completely.

(3) Reduce vehicular emissions by using non-polluting fuels like CNG. (4) Use LPG for domestic use.

(5) Improve the quality of fuel in automobiles and use catalytic converters in them.

(6) Make use of renewable alternative sources of energy like solar energy, wind energy and hydro energy.

The contamination if water with unwanted & harmful substances such as sewage, toxic, chemicals, industrial waste, etc, is called water pollutions.

(1) Industrial Wastes : The discharge of untreated, toxic industrial wastes from industries into rivers and lakes are one of the main causes of water pollution. 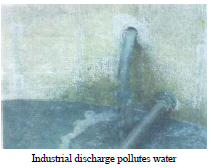 (2) Sewage : The dumping of sewage into rivers and lakes is the second major cause of water pollution in big cities. Excreta and cattle dung contain several harmful microbes that can cause diseases.

(3) Domestic Waste : This includes all kinds of wastes like human excreta, food waste, soaps and detergents, garbage, wrappers of eatables, plastics and other materials.

(4) Chemical Fertilisers and pesticides : The excessive use of fertilisers, pesticides and weedicides in the soil causes water pollution because some of these chemicals are washed into the rivers and lakes with rainwater. 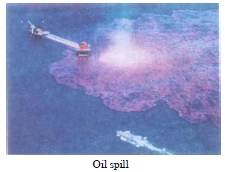 (1) The polluted water contains a number of disease-causing pathogens like bacteria, protozoa and virus which cause water borne diseases.

(2) The acids and alkalis present in industrial wastes kill those microorganisms which are the natural cleaning agents of water.

(3) The sewage and fertilisers present in polluted water are rich in nutrients. This leads to an excessive growth of algae (algal bloom) which cover the whole surface of the waterbody. This process is called eutrophication.

(4) The industrial wastes of industries like paper, paint, pesticide, metal, etc. Contain toxic chemicals like mercury, lead, copper, cadmium, etc. When polluted water is used, these toxic substances can enter the human body through food chains and affect their health.

Water pollution can be prevented or minimised by adopting following measures -

(1) The toxic industrial wastes should be treated chemically to neutralise the harmful substances present in it before discharging into rivers and lakes.

(2) The sewage should not be dumped into rivers. It should first be treated at the sewage treatment plant to remove the organic matter from it in the form of manure.

(3) The use of excessive fertilisers and pesticides should be avoided.

(4) The use of synthetic detergent should be minimised or biodegradable detergents should be used. (5) Dead bodies of human beings and animals should not be thrown into rivers.

(6) The excreta and other garbage should be treated in a biogas plant to get fuel as well as manure.

(7) The water of rivers, streams, ponds and lakes should be purified or cleaned. This can be done both by the industries and the government. One such example is the Ganga Action Plan launched by the Indian government.

(8) Trees and shrubs should be planted along the banks of the rivers.

(9) There should be general awareness among the masses regarding the harmful effects of water pollution and the ways of preventing it.

(10) Waste paper, plastics, waste food materials, and rotten food and vegetables should not be thrown into open drains.

Water which is suitable for drinking by human being is called potable water.

People in big cities get purified river or lake water through a network of water pipe lines. The three main processes that water undergoes during purification are sedimentation, filtration, and chlorination. Let us study about these processes.

Water is pumped from a river into a large tank and allowed to stand for some time. The heavy suspended particles settle down at the bottom of the tank as sediments. This process is called sedimentation. The upper layer of water is then sent for filtration.

After sedimentation, the water is filtered through thick layers of sand and gravel. In this process the remaining suspended impurities are removed.

The purified and chlorinated water is then supplied for human use through a network of pipes. Different states in the purification of city water supply is shown in figure.

Please click on below link to download pdf file for Class 8 Science Pollution of Air and Water Exam Notes.