CBSE Class 8 Science Force and Pressure Chapter Notes. There are many more useful educational material which the students can download in pdf format and use them for studies. Study material like concept maps, important and sure shot question banks, quick to learn flash cards, flow charts, mind maps, teacher notes, important formulas, past examinations question bank, important concepts taught by teachers. Students can download these useful educational material free and use them to get better marks in examinations.  Also refer to other worksheets for the same chapter and other subjects too. Use them for better understanding of the subjects.

The word Force is associated with either pull or push, which causes the change in the state of the body. A force cannot be seen. A force can be judged only by the effects it can produce on various objects around us.

Thus we can say that

1. Force is that agent which can change the state of rest or of uniform motion or shape or direction of motion of anybody. The S.I. unit of force is newton. It is a vector quantity (i.e. force has magnitude as well as direction).

a) Balanced forces cannot change the speed of a body. They can change the shape of the object. If the resultant of the forces acting on a body is zero, the forces are said to be balanced.

b) Unbalanced forces can cause the change in speed or direction of motion of the body. If the resultant of the forces acting on the body is not zero, the forces are said to be unbalanced.

2. Resultant force: When two or more forces act on a body simultaneously, then the single force which produces the same effect as produced by all the forces acting together, is known as the resultant force.

3. Classification of Forces: Forces may be classified into the following two classes:

ii) Frictional Force: A force arising when one body moves over the surface of another body and is directed opposite to the motion is called frictional force. Friction is a force that slows things down or prevents things from moving.

b) Non-contact Forces: The non-contact force or the action-at-a-distance corresponds to the force which do not involve any physical contact between the two bodies but act through the space between them.

i) Gravitational Force: The force of attraction between two objects because of their mass is called gravitational force.

ii) Magnetic Force: A magnet attracts from filings, nails and other objects made of iron, steel, nickel and cobalt . Magnets exerts forces of attraction and repulsion on other magnets. An important feature of magnetic force is that it can act from a distance, and is therefore a non-contact force. 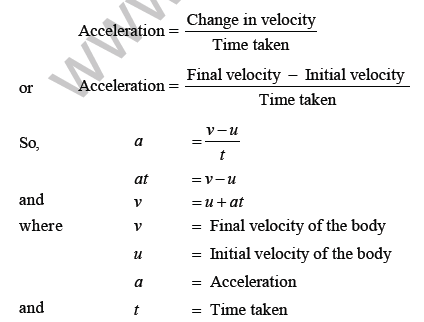 The equation v = u + at is known as the first equation motion and it is used to find out the velocity ‘v’ acquired by body in time ‘t’, the body having an initial velocity ‘u’ and uniform acceleration ‘a’. In fact, this equation has four value in it, if any three values are known, the fourth value can be calculated. By paying due attention to the sign of acceleration this equation can also be applied to the problems of retardation. 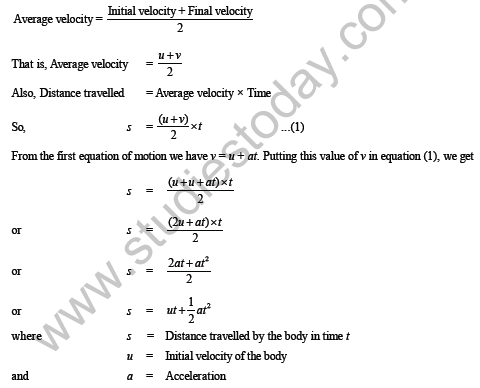 This is the second equation of motion and it is used to calculate the distance travelled by a body in time t.

The third equation of motion can be obtained by eliminating t between the first two equations of motions. This is done as follows:

From the second equation of motion we have: 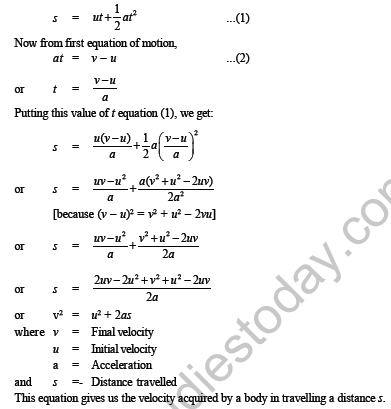 Newton’s First Law of Motion: According to Newton’s first law of motion, a body continues to be in a state of rest or in a state of uniform motion along a straight line unless an external unbalanced force is applied on the body.

Inertia: This inherent property of the body by virtue of which it is not able to change by itself its state of rest or state of uniform motion or direction of motion is called inertia of the body.

Inertia of rest: It is the property by virtue of which a body at rest cannot start moving on its own. Rather the body at rest opposes any force that tries to move it.

Example: When a carpet is suddenly jerked the dust fly off because due to sudden jerk the carpet comes in motion but dust particles tend to remain at rest due to inertia of rest and hence fall off.

Inertia of Motion: It is the property by virtue of which a body in motion cannot stop on its own. Rather the body in motion opposses any force that tries to stop it.

Eample: The action of mud guard over the wheels of vehicles is based on inertia of direction.

Note: Mass of a body is a measure of inertia of the body. Heavier the body, greater is its inertia.

Eample: When a running car stops suddenly, the passenger is jerked forward. The reason is that in a running car, the whole body of passenger is in the state of motion. As the car stops suddenly, the lower part of his body being in contact with the car, comes to rest but his upper part remains in the state of motion due to the inertia of motion. Thus he gets jerked forward.

The concept of linear momentum is extremely important in physics. Whenever we examine moving object we must consider both its mass and velocity because the quantity of motion possessed by the body depends upon these two factors. Let us go through the following examples: