Class 8 Science Reproduction Exam Notes. Please refer to the examination notes which you can use for preparing and revising for exams. These notes will help you to revise the concepts quickly and get good marks.

The process by which living organisms produce offsprings of their own kind is called reproduction.

This occurs without involving sex organs. Asexual reproduction requires only one parent for multiplication and formation of new offsprings. It does not require both male and female parents. It is the simplest form of reproduction and is commonly found in unicellular organisms (hydra, Amoeba, Paramecium) and lower animals like starfish, sponges and worms

The various methods of asexual repro­duction commonly found in animals are as follows :

• When one mature unicellular organism like Amoeba splits into two daughter individuals, the process is called binary fission.

This type of reproduction occurs when environmental conditions are most favourable 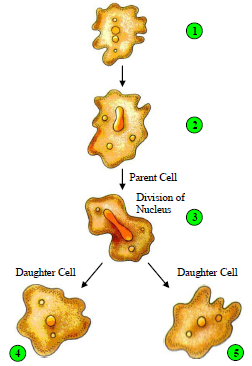 • In Amoeba, the nucleus first divides into two nuclei. Then the cytoplasm divides into two parts, each containing a nucleus. A constriction develops in the body which gradually deepens to form two daughter amoebae. This type of reproduction is binary fission.

• In this type of reproduction, as seen in hydra, a small outgrowth appears on the body of the organism. This outgrowth is called a bud. The nucleus of the parent body divides into two and one nucleus goes into the bud. The bud grows and finally gets detached from the parent body of hydra and begins to live as an independent individual.

• Since new individuals develop from the bud in hydra, this type of reproduction is called budding

• Besides these two processes, there are other methods of asexual reproduction which you will study in your higher classes.

• This is one of the most common methods of reproduction, found in most animals including human beings. In sexual reproduction, two parents, one male and the other female, are required. Each parent produces reproductive cells called gametes. The male gamete is called a sperm. and the female gamete is known as an egg or ovum.

• Those organisms which produce only one type of gamete are called unisexual, e.g. dogs, cat, fish, man, birds, reptiles

• Those organisms which have both the male and female sex organs in their body are called bisexual or hermaphrodite, e.g. earthworm, leech, hydra.

There are two types of fertilization in animals

The male reproductive system of humans consists of the following organs 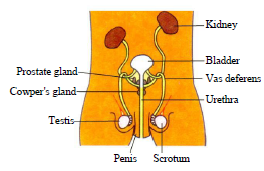 There is a pair of testes which lie outside the body within the scrotum. They produce millions of sperms

Vas deferens are two in numbers. This duct connects each testies to the urethra. It carries sperms to the urethra along with the secretion of reproductive glands. This mixture of sperms and secretions is called semen.

The two vas deferens open into the urethra and pass through the penis.

Urethra leads to a muscular organ called penis. It is used to deliver semen into the vagina of the female during mating. It is used to pass urine as well

The sexual maturity in human males is attained around the age of 14 to 15 years.

Sperms are produced in millions by the testes. They are very small in size. Each sperm consists of a head, a middle piece and a tail. Sperms swim in semen with the help of a tail.

The female reproductive system of humans consists of the following organs. 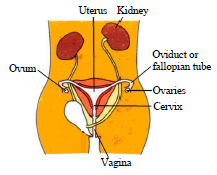 There are two ovaries which are situated in the abdominal cavity. Each ovary produces one mature ovum (egg) every month a process called ovulation. Like sperm, an egg is also a single cell.

It is a muscular tube which joins the uterus with the ovary. It carries the ovum into the uterus.

It is a hollow, muscular, pear-shaped organ. The development of the baby takes place inside it. The lower narrow part of the uterus is called cervix.

The uterus opens into a wide muscular tube called vagina. The vagina receives the penis during sexual intercourse. The sperms are discharged into the vagina.

• Once the zygote reaches the uterusJ it implants itself there. The zygote then starts dividing repeatedly to give rise to a ball of cells.

• The developing baby is called the embryo during the first eight weeks after fertilisation. The embryo attaches itself to the uterus wall with the help of placenta.

• The embryo continues to develop in the uterus. It gradually develops body parts such as hands, legs, eyes, ears, etc. From eight weeks till birth, the baby is called foetus.

• During this period of pregnancy, the baby takes in nourishment from the mother through the placenta and the umbilical cord.

• The uterus increases in size as the foetus grows. The uterus is filled with a fluid called amniotic fluid that protects the foetus from jerks and change in temperature

• The period between fertilisation and the birth of the baby is called gestation. The expectant mother is called pregnant. In humans, it lasts for about 40 weeks or around nine months.
• After nine months of pregnancy, the baby is delivered. Natural child birth or labour can last for several hours and is very painful for the mother. Sometimes due to some complications, doctors remove the child from the womb surgically. This is known as caesarian operation
• Babies delivered before completing gestation period are termed as premature babies and need special care

The process of change by which a larva transformed into an adult is called Metamorphosis.