Class 7 Social Science students should refer to the following printable worksheet in Pdf for Environment in standard 7. This test paper with questions and answers for Grade 7 Social Science will be very useful for exams and help you to score good marks

(ii) Which is not a component of human environment?
(a) Land
(b) Religion
(c) Community
Answer : A

(iv) Which is a threat to environment?
(a) Growing plant
(b) Growing population
(c) Growing crops
Answer : B

Question.What is an Ecosystem?
Answer : The system formed by the interaction of all living organisms with each other and with the physical and chemical factors of the environment in which they live, all linked by the transfer of energy and material is called an ecosystem.

Question. What is lithosphere?
Answer : The solid crust or the hard top layer of the earth is called the lithosphere. It is made up of rocks and minerals and is covered by a thin layer of soil. It is an irregular surface with various landforms like mountains, plateaus, plains, etc.

Question. What is Biosphere?
Answer : Biosphere or the living world is the narrow zone of earth where land, water and air interact with each other to support life. The plant and animal kingdom together form the biosphere.

Question. How do humans beings modify natural environment ?
Answer : Man modifies his environment to fulfill his basic needs, as it is the basic life support system. He builds houses to live in and industries to work in which modifies the environment and also its mineral wealth. Humans have used the fossils for their own development, disturbing the ecological system and animal habitats.

(b)Atmosphere The Atmosphere is a domain that consists of layers which are the troposphere, stratosphere, mesosphere, thermosphere as well as the exosphere. Lifeform sustains on troposphere which is the first layer of the atmosphere. The density of Atmosphere is maximum at sea level and decreases with increasing height. The atmosphere consists of 78% Nitrogen, 21% oxygen and other gases like Argon, Carbon dioxide as well as some other gases comprise 1% of the volume.

(d)Biosphere – The Domain of Life
• The biosphere is the narrow zone of contact between the land, water and air.
• It is the zone where life exists that makes this planet unique. 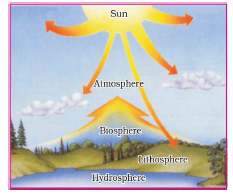 Question. How do man affects environment?
Answer : Man affects the environment by using its resources according to his needs. Developments in transportation, agriculture and industry has changed the world into ‘Global Market’.
Question. Write down the names of layers of earth.
Answer : 1. SIAL (Silicon+ Aluminium)
2. SIMA (Silicon+ Magnesium)
3. NiFe (Nickel+ Ferrous/Iron)

Fill in the Blanks

1. Environment has been divided in four spheres.
2. The SIAL layer of the Earth is made up of the material which is rich in Silicon and Aluminium.
3. NiFe is made up of material which is rich in Nickel and Ferrous elements.
4. The different types of species of animals is known as Animal Kingdom.
5. 71% Portion of earth has been covered by hydrosphere.

Fill in the blanks: