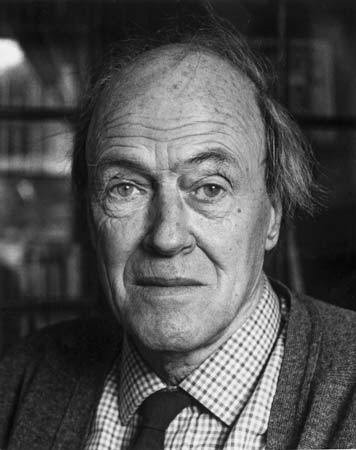 Roald Dahl (1916–1990) was a British author and scriptwriter, and "the most popular writer of children's book since Enid Blyton", according to Philip Howard, the literary editor of The Times. The death of an elder sister and his father within a few months when he was three gave his writing "a black savagery". He was raised by his Norwegian mother, who took him on annual trips to Norway, where she told him the stories of trolls and witches present in the dark Scandinavian fables. Dahl was influenced by the stories, and returned to many of the themes in his children's books. His mother also nurtured a passion in the young Dahl for reading and literature.

"The Hitchhiker," a short story by Roald Dahl, is about a man (the story's narrator) who picks up a hitchhiker while driving to London. The driver is pulled over for speeding by a police officer, who writes down the driver's and hitchhiker's information in a book. When the driver discovers that the hitchhiker stole the police officer's book, they pull off the road to burn it.

The driver tells the hitchhiker that he is a writer, which makes it appear that he could, in fact, be Dahl himself. He appears proud of his BMW, and the hitchhiker encourages him to show how fast the car can go. This ultimately leads to his speeding ticket.

The hitchhiker, meanwhile, claims to be a "finger smith," which proves to be a delicate way of saying he is a pickpocket. He proves this when he shows the narrator that he has stolen his belt, and intends to steal money from the winners at the horse races they are headed to.

I.  Answer with reference to context:

I had the accelerator jammed right down against the floor and I held it there.

(i) Identify the lesson. Who was the speaker?

(ii) What was he asking the other person to do?

(i) Why was the speaker apologising?

(ii) What kind of a business was he referring to?

c) ‘Carefully he copied the name and address from my license. Then he gave it back to me. He strolled around to the front of the car and read the number from the license plate and wrote that down as well.’

(i) Who was the person who copied down the name and address? Why?

a) What did the hitchhiker say his job was?

b) Why won't the hitchhiker steal anything from the narrator?

c) What kind of car does the narrator drive?

III.  Choose the correct answer from the options given below:

1. Why does the narrator pick up a hitchhiker?

a.  He hates traveling alone.

b.. He loved dangerous situations.

d. He remembers when he was a hitchhiker and no one in a nice car would stop to pick him up.

2. Where did the hitchhiker want to go?

b. The horse tracks

3. Why does the hitchhiker want the narrator to speed the car to as fast as it will go?

a. He wants to get him in trouble.

b. He has a pizza waiting for him at home.

c. He wants to see if the car dealer was telling the truth on how fast the car will actually go.

d. He likes speeding on the highway.

Click here to download Worksheets for Class 8 English. Practice tests for Class 8 for English has been made for all important topics in NCERT book and is...
More..

Click here to download Class 8 English assignments. Practice test sheets for Class 8 for English has been made for all important topics in NCERT book 2020 2021...
More..

Access CBSE Class 8 English MCQs for MCQs for important topics for all chapters in MCQs based on CBSE and NCERT pattern. Access full database of multiple...
More..

Board Exams FAQs released by CBSE

CBSE has released very important FAQs for class 10 and class 12 students who have given the board exams. Students have been coming up with lot of queries and have lot of questions relating to what are the next steps of CBSE. The following FAQs by CBSE will help to...

The CBSE Board Exams have been postponed twice this year! New Delhi: The Education Ministry has urged the Central Board of Secondary Education (CBSE) to reinstitute the board exams only for the main subjects. As per the official statement the Board will not conduct...