Download printable Economics Class 11 Worksheets in pdf format, CBSE Class 11 Economics Worksheet Set G Solved has been prepared as per the latest syllabus and exam pattern issued by CBSE, NCERT and KVS. Also download free pdf Economics Class 11 Assignments and practice them daily to get better marks in tests and exams for Grade 11. Free chapter wise worksheets with answers have been designed by Standard 11 teachers as per latest examination pattern

Class 11 Economics students should refer to the following printable worksheet in Pdf in Grade 11. This test paper with questions and solutions for Standard 11 Economics will be very useful for tests and exams and help you to score better marks

2. A firm increases its output from 85 units to 90 units. As a result Total Variable Cost increases from Rs.180 to Rs. 200.What could be the Marginal Cost of Production of 90th unit.

3. Total Cost Curve and Total Variable Curve are parallel to each other. This is due to the fact that:

4. Consider the following schedule and assume the Average Fixed Cost of producing 3 units of output is Rs.5. Calculate Marginal Cost and Average Cost.

6. Among Mean and Median which value is the most representative value of all observations?

7. Which one of the following represents spatial classification?

8. How is a frequency curve different from frequency polygon?

9. Construct a pie diagram from the following information regarding the cost of construction of a house in Mumbai.

10.Locate Median on a graph, estimate and verify the result using formula 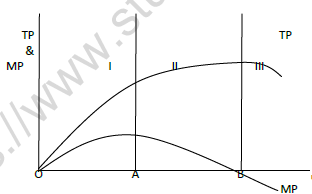 Stage I: When the level of employment of an input is sufficiently low, its MP increases; TP increases at an increasing rate. This stage ends at the point when MP reaches maximum. This stage is also known as the stage of increasing returns.

Stage II: MP diminishes but remains positive. TP will increase but at a diminishing rate. At the end of this stage MP is zero and TP reaches maximum and remain constant. This phase is also called diminishing returns.

6. Mean because it is base on all items of the series

7. A. Distribution of population among various states in India

8. Frequency curve is a smoothed curve whereas frequency polygon consists of straight lines