Download printable Economics Class 11 Worksheets in pdf format, CBSE Class 11 Economics Organisation of Data Worksheet Set C has been prepared as per the latest syllabus and exam pattern issued by CBSE, NCERT and KVS. Also download free pdf Economics Class 11 Assignments and practice them daily to get better marks in tests and exams for Grade 11. Free chapter wise worksheets with answers have been designed by Standard 11 teachers as per latest examination pattern

The purpose of classifying raw data is to bring order in them so that they can be subjected to further statistical analysis easily. While classification of objects or things saves our valuable time and effort, it is not done in a random manner. Classification, therefore, is arranging or organising similar things into groups or classes.

Unclassified data or highly disorganised data is raw data. They are often very large and difficult to handle. To draw meaningful conclusions from them, proper organisation and presentation of such data is needed before any systematic statistical analysis is undertaken. Hence after collecting data the next step is to organise and present them in a classified form as presented as a table, diagrams and graphs.

The raw data are summarised, and made comprehensible by classification. When facts of similar characteristics are placed in the same class, it enables one to locate them easily, make comparison, and draw inferences without any difficulty.

The groups or classes of a classification can be done in various ways.

• Qualitative Classification: Data classified according to characteristics that cannot be quantified. For example, nationality, literacy, religion, gender, marital status, etc. They cannot be measured. Yet these attributes can be classified on the basis of either the presence or the absence of a qualitative characteristic.

• Quantitative Classification: data that can be quantified or expressed in numerical values. Characteristics like height, weight, age, income, marks of students, etc. are quantitative in nature.

Different variables vary differently. They are broadly classified as:
1. Continuous and
2. Discrete.

A continuous variable can take any numerical value. It m,y take integral values (1, 2, 3, 4,), fractional values (1/2, 2/3, 3/4, ), and values that are not exact fractions Other examples of a continuous variable are weight, time, distance, etc.
A discrete variable can take only certain values. Its value changes only by finite "jumps". For example, a variable like the "number of students in a class", for different classes, would assume values that are only whole numbers. It cannot take any fractional value like 0.5 because "half of a student" is does not make sense.

♦ WHAT IS A FREQUENCY DISTRIBUTION?

A frequency distribution is a comprehensive way to classify raw data of a quantitative variable. It shows how the different values of a variable (here, the marks in mathematics scored by a student) are distributed in different classes along with their corresponding class frequencies.

Class Frequency means the number of values in a particular class. Each class in a frequency distribution table is rounded by Class Limits. Class limits are the two ends of a class. The lowest value is called the Lower Class Limit and the highest value the Upper Class Limit. ♦ HOW TO PREPARE A FREQUENCY DISTRIBUTION?

While preparing a frequency distribution, the following four questions need to be kept in mind:

♦ How many classes should we have?

♦ What should be the size of each class?

The answer to this question depends on the answer to the previous question. We can determine the number of classes once we decide the class interval. Similarly, we can determine the class interval once we decide the number of classes. Thus we find that these two decisions are inter-linked with one another. We cannot decide on one without deciding on the other.

♦ How should we determine the class limits?

value greater than the maximum value of the variable. The class limits must be such chosen that the midpoint or class mark of each class coincide, as far as possible, with any value around which the data tend to be concentrated.

♦ There are two different methods of class limits are:

♦ How should we get the frequency for each class?

In simple terms, frequency of an observation means how many times that observation occurs in the raw data. Class Frequency refers to the number of values in a particular class. The counting of class frequency is done by tally marks against the particular class. A tally ( I ) is put against an observation. The counting of tally is made easier when four of them are put as ( IIII ) and the fifth tally is placed across then as ( / ). This method is more commonly known as the “four and cross method” . Thus frequency in a class is equal to the number of tallies against that class.

The classification of data as a frequency distribution has an inherent shortcoming. While it summarises the raw data making it concise and comprehensible, it does not show the details that are found in raw data. There is a loss of information in classifying raw data. Once the data are grouped into classes, an individual observation has no significance in further statistical calculations. For Example, the class 20-30 contains 6 observations: 25, 25, 20, 22, 25 and 28. So when these data are grouped as a class 20-30 in the frequency distribution, it provides only the number of records in that class and not their actual values. All values in this class are assumed to be equal to the middle value of the class interval Statistical calculations are based only on the values of class mark and not on the values of the observations in that class. Thus the use of class mark instead of the actual values of the observations in
statistical methods involves considerable loss of information.

In some cases frequency distributions with unequal class intervals are more appropriate. This is done when most of the frequencies are concentrated around some classes and are widely spread for other classes.

A Bivariate Frequency Distribution is the frequency distribution of two variables.

The data collected from primary and secondary sources are raw or unclassified. Once the data is collected, the next step is to classify then for further statistical analysis. Classification brings order in the data. Data can be classified through a frequency distribution in a comprehensive manner.

2. What are the different ways of classification of data? Explain

3. What is a frequency distribution?

5. What are steps involved in the construction of a frequency distribution?

6. What is a variable? Distinguish between a discrete and a continuous variable.

7. What is loss of information in classified data?

8. Do you agree that classified data is better than raw data?

10. Prepare a frequency distribution by inclusive method taking class interval of 7 from the following data:

11. Prepare a frequency distribution from the following data using a appropriate class interval 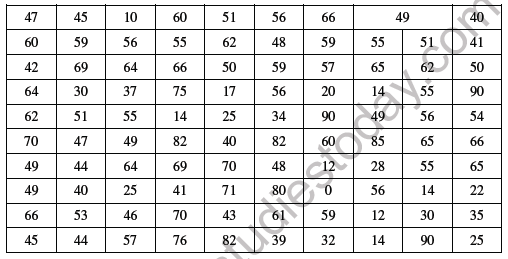 12. Prepare a frequency distribution from the following data using a appropriate class interval 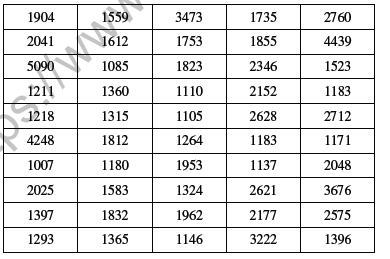