Download printable Economics Class 11 Worksheets in pdf format, CBSE Class 11 Economics Collection of Data Worksheet Set C has been prepared as per the latest syllabus and exam pattern issued by CBSE, NCERT and KVS. Also download free pdf Economics Class 11 Assignments and practice them daily to get better marks in tests and exams for Grade 11. Free chapter wise worksheets with answers have been designed by Standard 11 teachers as per latest examination pattern

The purpose of collection of data is to collect evidence for reaching a sound and clear solution to a problem. When data for a period of varies from year to year they are called variable generally represented by the letters X, Y or Z. The values of these variables are the observation. 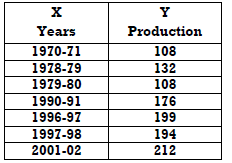 ♦ WHAT ARE THE SOURCES OF DATA?

Statistical data can be obtained from two sources.
• Primary Data: The enumerator (person who collects the data) may collect the data by conducting an enquiry or an investigation. Such data are called Primary Data, OR first hand information.

• Secondary data: If the data have been collected and processed (scrutinised and tabulated) by some other agency, they are called Secondary Data. Generally, the published data are secondary data. They can be obtained either from published sources or from any other source, for example, a web site. Use of secondary data saves time and cost.

♦ HOW IS DATA COLLECTED?

Data is collected by conducting a survey by asking questions about a particular product or
topic from a large group of people. The purpose of the survey is to collect data. Survey is a
method of gathering information from individuals.

points must be kept in mind:

Closed ended or structured questions can either be a two-way question or a multip1e choice question. Closed -ended questions are easy to use, score and code for analysis, because all the respondents respond from the given options.
Open-ended questions allow for more individualised responses, but they are difficult to interpret and hard to score, since there are a lot of variations in the responses.

There are three basic ways of collecting data:

This method is used when the researcher has access to all the members. The researcher conducts face to face interviews with the respondents.

• It is expensive
• It takes longer time to complete the survey.
• Presence of the researcher may hold back respondents from saying what they really think.

When the data in a survey are collected by mail, the questionnaire is sent to each individual by mail with a request to complete and return it by a given date.

• It is less expensive.
• It allows the researcher' to have access to people in remote areas, who might be difficult to reach in person or by telephone.
• It does not allow influencing of the respondents by the interviewer.
• It also permits the respondents to take sufficient time to answers to the questions.
• These days’ online surveys or surveys through short messaging service

In a telephone interview, the investigator asks questions over the telephone.

• The pilot survey helps in providing a preliminary idea about the survey.
• It helps to know the shortcomings and drawbacks of the questions.
• It also helps in assessing the suitability of questions, clarity of instructions, Performance of enumerators and the cost and time involved in the actual survey.

A survey, which includes every element of the population, is known as Census or the Method of Complete Enumeration. The essential feature of this method is that this covers every individual unit in the entire population. You cannot select some and leave out others.

Census of India is carried out every ten years. A house-to- house enquiry is carried out, covering all households in India. Demographic data on birth and death rates, literacy, workforce, life expectancy, size and composition of population, etc. are collected and published by the Registrar General of India.

Population or the Universe in statistics means totality of the items under study. A population is always all the individuals/items who possess certain characteristics or a set of characteristics according to the purpose of the survey.

The first task in selecting a sample is to identify the population. Once the population is identified, the researcher selects a Representative sample. A sample refers to a group or section of the population from which information is to be obtained. A good sample is generally smaller than the population and is capable of providing reasonably accurate information at a much lower cost and shorter time. Most of the surveys are sample
surveys.

• A sample can provide reasonably reliable and accurate information at a lower cost and shorter time.
• More detailed information can be collected by conducting intensive enquiries.
• A smaller team of enumerators is required and it is easier to train than and supervise their work more effectively.
• There are two main types of sampling