1. A substance which retains its magnetic properties for a long period is called a ____

2. The north pole of the earth's magnet is near the geographical ____.

4.  A paper clip hanging in air; the possible reason could be: 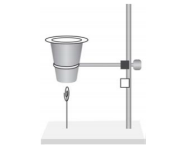 b. There is a magnet in the paper cup

c.  There is water in the cup

d. The water in the cup is hot

5. The substances that get attracted towards a magnet are called_______

6. Maximum iron filings stick in the _____of a bar magnet when it is brought near them.

c.  Neither end nor middle

d. All around equally

7. The statue of a lady on the chariot of the emperor Hoang Ti, rests in such a position  that its extended arm always point towards ____ direction

c.  Dropped from a height

10.  A magnet was brought from different directions towards a toy boat that has been floating in water in a tub. Boat moves towards the magnet if North Pole of the magnet is brought near its head.

a. Boat is fitted with a magnet with north pole towards its head

b. Boat is fitted with a magnet with south pole towards its head

c.  Boat has a small magnet fixed along its length

d. Boat is made up non‐magnetic material

11. A rectangular piece of iron can be magnetized by rubbing it with

a. A magnet from one end to the other end several times using both the poles alternatively.

b. A magnet from one end to the other end several times using same pole of the magnet.

d. The back of the pencil several times

Download Printable Worksheets, test papers for Class 6 Science with questions answers for all topics and chapters as per CBSE, NCERT, KVS syllabus
More..